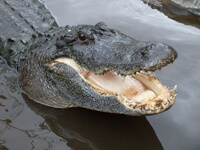 Science Fact:  Crocodiles and Alligators – Crocodilians some would call them – have revealed one of the deep secrets that have made them so successful.  A Russian-American zoologist and author, Vladimir Dinets, and his colleagues observed both crocodiles and alligators placing desirable sticks on their snouts during the nest-building season of nearby waterfowl.  The croc would remain still, sometimes for hours, patiently awaiting the arrival of an egret.  The egret would mosey over and grab for a stick, often winding up as dinner for the croc.

Egrets, being bird-brains, are not renowned for their intelligence, but you’d think an egret would notice the hazard and not come near.  Crocodiles, however, can submerge their entire bodies in muddy water, only the eyes and snout visible.  And when their bodies do peep above the water, they often resemble rough floating logs:

Because the croc remains still for so long the egret does not perceive it as a threat.  “I think Brutus there is asleep, I’ll chance it.”  And during nesting season, desirable sticks are in scarce supply, often causing fights among hormone-pumped avians.  Grabbing a readily available stick beats battling a bigger bird for it.  Among the reports of this work are articles in Science Daily and the L. A. Times; the full research article is Crocodiles Use Tools for Hunting.

The term “tool” in that title may seem surprising, since you and I generally get our tools from the hardware store, where we haven’t seen crocodiles shopping recently.  Fortunately, Wikipedia comes to the rescue with an appropriate definition:  A tool is any physical item that can be used to achieve a goal, especially if the item is not consumed in the process.  Naturalists regularly observe animals, especially apes and crows, using sticks and leaves as tools to extract ants and other tasty morsels from their burrows.  Similarly, dolphins carry sponges in their mouths, with which they scrub the ocean bottom to uncover critters to eat.  However, using a tool as a lure for prey is unusual, especially since crocodiles are not thought to be the brightest members of the Animal Kingdom.

Usually when an animal uses a lure, the lure has evolved as part of its body.  The typical approach is for the predator to remain still or hidden while wiggling a lure that is much smaller than itself.  A would-be predator comes near to eat the lure and Snap!  Some fascinating examples exist: 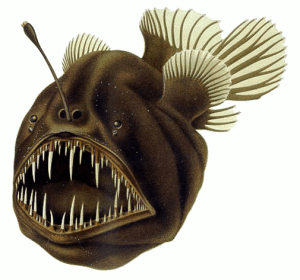 The Anglerfish has an esca, thin fleshy spike growing from its forehead.  When the fish wiggles the esca, the enlarged end of the spike resembles a tiny fish, darting back and forth.  The anglerfish has some impressive teeth to dispose of anything that comes to check out the lure.

The Barbeled Dragonfish has evolved a similar lure from a barbel hanging from its lower lip.  Because the dragonfish lives at a depth around 5,000 feet, where the sea is very dark, its lure emits light that can be flashed on and off to attract a visitor that will become a meal.  The dragonfish wants to extinguish its light when it is not actually fishing for food, so it does not attract a still larger predator.  This is potentially a problem, since the fish it eats may emit bioluminescent light, even after it is eaten.  Nature has solved that problem for the dragonfish by giving it a stomach with opaque black walls so the dragonfish can vanish into the darkness as it digests its dinner. 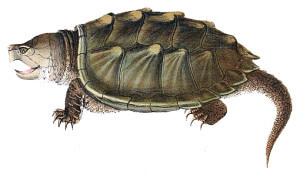 The Alligator Snapping Turtle has a wormlike appendage squirming at the end of its tongue.  It waits with mouth open, perfectly still except for the lure, and feasts on minnows.

Lures like these are a highly visible form of what’s called aggressive mimicry, in which a predator either pretends to be harmless, or to offer its prey food or sex. 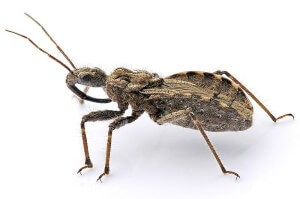 This Assassin Bug [photo: Fir0002/Flagstaffotos] enters a spider’s web, then plucks the strands in a particular pattern that resembles a harmless fly or gnat that is trapped.  The spider comes to investigate and, well, you know. 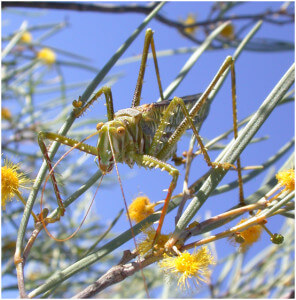 The Predatory Katydid [photo: Marshall DC, Hill KBR (2009) Versatile Aggressive Mimicry of Cicadas by an Australian Predatory Katydid. PLoS ONE 4(1): e4185. doi:10.1371/journal.pone.0004185] in Australia imitates the mating sounds of cicadas to lure them to their death. 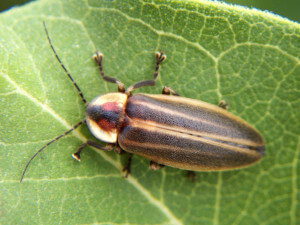 The Femme Fatale Firefly [photo: Bruce Marlin] is a female lightning bug that flashes its light with a pattern that resembles the mating signals of unrelated species such as photinus (rover fireflies).  A male photinus comes over to investigate and becomes prey.

Science Speculation:  We are animals ourselves, of course, and we have adapted to eat a wide variety of food.  Most humans ambush our food in a supermarket display, but a few of us pit our brains against the finest defenses Nature has evolved.  A fisherman or fisherwoman – OK, an angler – chooses a suitable lure and wiggles it realistically through the water;  a waterfowl hunter sets out realistic decoys and uses a duck call to attract birds;  a deer hunter may wait near a salt lick, either a natural one or (where legal) an artificial one, to lure his prey.  These folks are all members of a very exclusive club: a club that crocodiles and alligators, as tool-using predators themselves, have now joined.

Have you encountered crocodiles or alligators up close in open terrain (that is, not on the other side of a fence)?  How did you react?  How did the critter react?