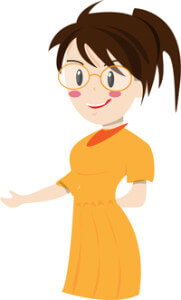 Science Fact:  Women scientists are readily found in biology, medicine and the social sciences. However, they are scarce in math, physics and engineering.

You don’t have to be a feminist to be troubled by this fact. People’s skills differ, and sometimes the best person in a field is light-years ahead of everyone else in that field.

Do we want the most competent economists guiding our economy? The most effective space scientists running our space programs? Then we need to draw from the broadest pool of candidates. If people are limited by society – or by themselves – to career choices based on social factors rather than ability, we suffer and our Nation suffers.

Women Scientists Are Rare in the Physical Sciences

In the most recent year for which data have been published (2016) women received 46% of the doctoral degrees awarded in the U.S. However, the percentage of women receiving such degrees varied wildly by the field of study, as shown in this table: 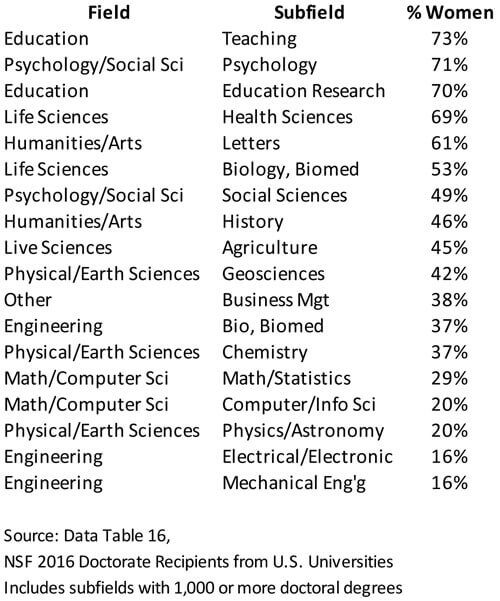 Science Speculation:  In many countries, entering a respected and remunerative field depends on family income or personal connections. In the U.S. we are proud of having removed many of those limitations. So a kid with no money and no mentor can get lucky, have a wonderful career in science and get to write a blog for you today.

But one place where we lag in the U.S. is in women scientists or, more accurately, in allowing women the same opportunity that we make available to men, to become scientists if they have the talent and desire. The reasons for this are social rather than biological, as shown by higher percentage of women scientists in other developed countries.

But what I just gave you are assertions, not data. Where’s the data?

A Study of Gender Bias

The first, conducted at Yale last year, looked at whether there is gender bias among science professors at our universities. This study is one of those mentioned in a long, thoughtful and highly recommendable essay by Eileen Pollack in the New York Times.

The researchers studied 165 Chemistry, Physics and Biology professors at six major U.S. research universities, both public and private, spaced across the country. The professors each reviewed a fictitious resume of a candidate for a laboratory manager position at the university. However, the name of the candidate was “John” in half the resumes and “Jennifer” in the other half.

If you guessed that the results showed gender bias, you may go to the head of the class. The professors rated the male applicant as significantly more competent and hireable than the identical female applicant. Moreover, they offered the candidate a 10% higher starting salary and offered more career mentoring. The results were the same for chemists, physicists and biologists.

More shockingly, the results were the same regardless of the gender of the professor. In other words:

OK, so there’s gender bias, even among highly successful women scientists. In addition, other studies show that this discourages women from becoming scientists. What can be done about it?

A Study of Women’s Choices to Become Scientists

That brings us to the other recent study by a team of researchers at five universities on the East Coast. They studied over fifteen hundred women at forty universities, all of whom had taken high school physics. They wanted to test whether any of the following factors were influential in causing women to select a career in the physical sciences:
(1) Having a single-sex physics class (do boys in the class keep girls from learning?).
(2) Having female scientist guest speakers in physics class (are in-person role models motivating?).
(3) Having a female physics teacher (are male teachers too biased to give the women a chance?).
(4) Discussing the work of female scientists in physics class (are famous role models useful?).
(5) Discussing the underrepresentation of women in physics class (does awareness help motivation?).

The results may surprise you! In the same order as above, here’s what they found:
(1) A single-sex class made the girls 7% less likely to choose a career in the physical sciences.
(2) Women guest speakers, 10% more likely.
(3) Female teacher, 13% more likely.
(4) Famous role models, 30% more likely.
(5) Discussion of underrepresentation, 44% more likely (and this result was the most solidly proven of all).

It seems that if you want to encourage young women to opt for one of the male-dominated career paths, awareness trumps almost anything else you can do.

If we allow U.S. popular culture to set the agenda for young people’s career choices, it would be a miracle if any of our girls became women scientists!

Do you know any women scientists? If you are a woman scientist, what do you think about these studies?

This blog is referenced on the Meaning of Life cornerstone page. That’s because the meaning of life depends in part on how we treat other people. The studies we summarize above show that gender bias is a complex social phenomenon. They may make us aware of biases that can affect our own behavior.