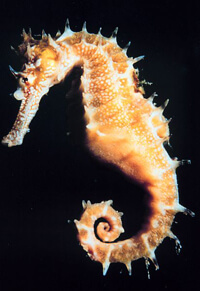 Science Fact:  The seahorse is a popular favorite among snorkelers, scuba divers and aquarium-goers. It is beautiful and graceful as it undulates in the currents, and looks not only familiar, but weirdly out of place among all the fish.

Although some species can grow over a foot in size, the seahorse you see is typically only an inch or two long. You have to be pretty patient to find one. They live in shallow warm seawater in all parts of the world. They hang out in coral (both soft and hard), sea grass and mangroves, where they blend right into the surroundings.

The seahorse seems to move very slowly, even awkwardly, for a denizen of the deep. Unfortunately, they are popular in Chinese medicine, so as a result many species are believed to be threatened with extinction. Thus they are prey not only for photographers but also for commercial catching.

But a recent article now tells the truth: the seahorse is not at the bottom of the food chain, simply prey for every passing sea creature or human. In fact, it is a feared and skillful predator. The seahorse loves to feed on tiny crustaceans called copepods, and catches 90% of the prey that he stalks. The seahorse sneaks up on his intended meal, then unleashes a spring mechanism built into his neck while simultaneously sucking in water. The copepod, who is one of the fastest swimmers in the ocean, doesn’t have a chance. A fascinating 16-second video captures the action.

Science Speculation:  The research results are fascinating enough, because they give us previously unknown information about this popular little animal. But the original study also reveals the amazing power of collaboration across different scientific fields.

It turns out that the odd-looking snout on the seahorse, which seems so different from most sea creatures, is shaped so as to make a minimum disturbance in the water. Thus the copepod, which is hypersensitive to motion in the water, doesn’t sense the presence of the seahorse until it is just too late for him to get away.

The seahorse has revealed one of his secrets to a study spanning several fields of science. How has collaboration with people of different backgrounds benefitted you?