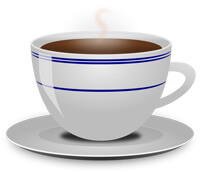 A group of six researchers in Portugal and Spain, who must have thought that their morning Joe was missing something, set out to transform spent coffee grounds into a new liquor. And a panel of taste testers said, OK, it smells like coffee and tastes good enough to qualify for human consumption.

Science Speculation:  Alcoholic beverage producers are always looking for ways to distinguish their product, to entice consumers to move beyond generic vodka, beer or wine. Distinctive flavors are a powerful weapon in their marketing program, but buyers are picky.  Liquors called “digestifs” are an acquired taste: Jägermeister, for example, is humorously referred to as “liver glue”.  And some flavor combinations are not calculated to appeal to the multitudes: consider such taste treats as chocolate whiskey, blueberry pancake liqueur, peanut butter & jelly, salted caramel and the ever-popular bacon vodka.

Liqueurs with coffee added for flavoring are not new, of course. What seems to be new is the idea of using discarded coffee grounds as the source of the brew, the basic starting ingredient. Although used coffee grounds are claimed to have many home uses, using them to expand your liquor cabinet may be a coming thing. Just one caution: the coffee liquor that results has practically no caffeine. So as a morning beverage it’s more in the Bloody Mary department than the wake-up jolt you may be counting on.

Coffee may be the newest, but have you tried other new or unusual flavors in beverages?