Green Sea Turtles, “honu” in Hawaiian, are denizens of the deep that may seem sleepy and lazy. However, a sea turtle shows quite a personality when you watch him engage in his “sea turtle” behavior. A Maui vacation offers many chances to observe these beautiful creatures.

When you snorkel at one of Maui’s friendly coves, the colorful fishes darting in and out of the coral first draw your attention. But as you swim around you may suddenly find a gigantic shape looming over your shoulder, or rising up beneath you. You are in the world of the sea turtles! Fortunately, you are neither good to eat nor likely to make a meal of them. Therefore, they go about their business without paying attention to you at all. Nevertheless, having a creature the size of a desk nudging close to you can be unnerving.

As you look below, you then discover that the dark shapes you thought were rocks are actually this turtle’s sisters, cousins and aunts. They lounge around on the sandy bottom and often snuggle under an outcrop of coral.

The casual snorkeler might think that all sea turtles do is sit on the sand, coming up rarely, every hour or two, to breathe. However, a little observation shows a variety of characteristic behaviors.

– Feeding:  Almost any time of day, sea turtles may graze on algae growing on rocks or attached to coral. However, to really see the feast in progress, wait until dusk. Then the sea turtles start feeding in droves and because of the increased activity, they need to breathe every few minutes. Thus you will see shell backs appear and heads popping to the surface, over and over until night falls.

– Basking: Sea turtles, like other reptiles, are cold-blooded. They regulate their body temperature by seeking warmer or colder water, or by basking in the sun.

On a Maui vacation you may find yourself at a quiet coastline, without swarms of noisy visitors. Then you may see a turtle lying on rocks near the shore, apparently dead. But it is not dead, and in fact due to wildlife protection laws you may not approach it or bother it.

If you watch long enough you will see it ever so slowly rouse itself, then move in lurches toward the water. There, it will launch itself and swim away as gracefully as you might imagine. 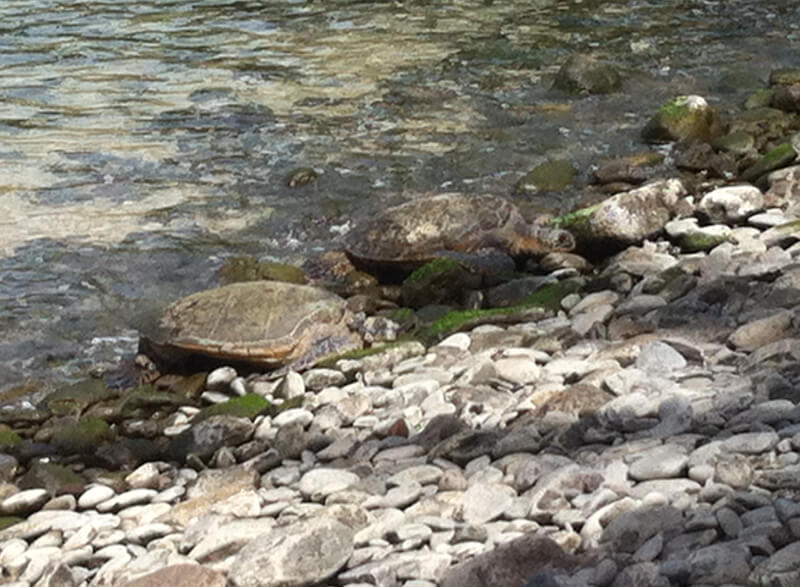 – Sex: Sea turtles have sex like many other animals, that is to say, “doggy style”. However, like everything else sea turtles do it tends to be v-e-r-y s-l-o-w. Sea turtles most often get the urge near a nesting beach. However, we have also seen them making little turtles in Honokeana Cove because it is quiet and private. If a turtle floats on the surface for a long time, rocking from one side to the other, look closely and you may see two heads catching air and the edges of two shells. The male has hooks on his front flippers with which to grab the front edge of the female’s shell, so she is unlikely to slip away accidentally or even intentionally.

– Cleaning Stations: Because sea turtles may live 50 years or more they have plenty of time to accumulate algae on their shells. The algae creates drag in the water, which increases their energy expenditure as they swim.

Like other large marine animals, sea turtles have evolved a symbiotic relationship with small fishes. Turtles will approach a cleaning station and “pose” or hover, almost stationary. Small fishes cluster around, nibbling algae from the sea turtles’ shells, flippers and necks.

Cleaning occurs at specific sites. For example, Honokeana Cove has a number of coral outcrops, one of them near the north central part of the Cove. You may often see one or two sea turtles here, having their shells cleaned. Other sea turtles being cleaned may be seen HERE.

Green sea turtles are one of the visible successes of the global species conservation movement. Sea turtles were once hunted to near extinction. Recently, turtles have made a strong comeback thanks to protective laws in many countries, including the U.S. Endangered Species Act and State of Hawaii wildlife laws.

Nevertheless, worldwide turtles still face many threats. These include hunting and egg-poaching as well as fishing nets and loss of habitat.  In addition, survivors sometimes suffer from excessive attention and disturbance by well-meaning but unthinking tourists.

Well-thought-out guidelines for reef and marine life protection are readily available. Green sea turtles are one of the few magnificent creatures still living in their natural habitat, yet close enough to tourist areas that any visitor may enjoy them.

Have you seen green sea turtles in the wild? What kinds of activity did you observe?