Science Fact: Humpback whales make a great companion to the Green Sea Turtles in Wednesday’s blog. Not because they are friends, or symbiotes, or even spend much time in the same part of the ocean. But because they share other characteristics that make them fascinating to the casual nature-watcher and nature-lover in all of us.

Both humpback whales and green sea turtles:
– Are large, magnificent marine animals that have struggled back from near-extinction.
– Are readily observable in the wild by anyone who visits their geographical area.
– And show a variety of behavior that we do not yet understand.

Early whalers gave humpback whales their name, in reference to the “humped” appearance of the whale’s back. And there’s no mystery where to find them. Although they live in every ocean of the world, they group into separate populations whose members rarely if ever mix. In the Pacific Ocean alone, there are ten distinct populations: five in the north and five in the south. Of 80,000 humpback whales world-wide, 20,000 live in the North Pacific and of those, some 60% visit Hawaii every year.

Hawaii has excellent facilities to host visitors and a predictably beautiful climate. That make it the viewing location of choice for many eco-tourists. Moreover, Hawaii’s humpback whales are predictable. They summer off the west coast of the U.S. and Canada, where their food is plentiful. And in the winter they are very reliable visitors. In fact, boat operators guarantee you a whale sighting if you take a “whale watch” cruise between November 4 and May 15.

OK, I got off the plane, I’m in Hawaii. Show me the humpback whales!

Fine, there are two places that they primarily hang out. One is Penguin Bank, a volcano 200 feet below the ocean’s surface west of the island of Molokai. It’s rather difficult for the casual tourist to visit. The other is the ’Au’au Channel. That is the portion of the ocean west of Maui and east of Lāna’i. It’s just 8.8 miles wide and lies between the islands of Moloka’i to the north and Kaho’olawe to the south.

’Au’au means “to take a bath” because of the channel’s calm conditions and its shallow (for a humpback whale) depth of 108 feet. This tropical humpback whale spa is ideally suited to watching whales acting like whales on their winter break, after a busy summer in the Arctic of feeding on krill and avoiding orcas. If you take a Maui vacation in the winter, you’re in a perfect location to see the whales.

Make yourself comfortable on the lanai (deck) of your ocean-facing condo anywhere in West Maui during “whale season.” Pick up a cooling beverage, perhaps a Mai Tai, a Maui Brewing Company ale or an Ito En green tea. Put up your feet and scan the horizon. If you have binoculars close at hand, all the better. You’ll see a rich variety of behavior by humpback whales, well documented in Kaufman and Forestell’s book.

These whale behaviors include:

– Blows: “Thar she blow” is the Melvillean shout describing the explosive exhalation of a surfacing whale. The foam and spray (which have a fishy smell) can be seen from miles away. They hover in the air for quite a while. Long enough for you to alert a nearby friend, lounging with his or her adult beverage, to enjoy the sight.

– Rise: Sometimes you will see a dark shape breaking the water without a visible blow. It’s like a black island rising from the deep, out in the middle of the water. It has a rounded top, often with a fin showing. This mystery mountain is in fact one of the humpback whales in your neighborhood.

-Peduncle Arch and Fluke Up Dive: Once at the surface, the whale may take several breaths and arch its back. Then, it will dive below the surface while lifting its tail (fluke) above the water. This fluke-up dive is almost the trademark of humpback whales. Incidentally, it gives us the chance to identify individual whales, since the fluke pattern constitutes a “fingerprint” for a specific whale. 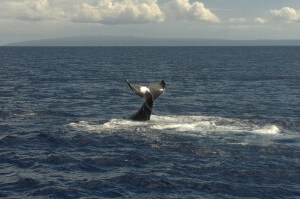 – Tail Slap: Sometimes humpback whales display their tail or fluke and instead of diving, forcefully slap the surface of the water. You literally can hear the sound miles away. And it’s not just one slap. Typically, a whale repeats the tail slap, perhaps as many as two dozen times. The sound of a tail slap does not travel as far as other whale behaviors. For that reason we think it to be a form of aggression – males competing for a female – rather than simple communication.

– Pec Slap: Even more impressive are pec slaps by humpback whales. In this case, the whale rolls on the surface, bringing its long pectoral fin out of the water and slapping it down. Marine biologists think that this behavior is not aggressive (Kaufman and Forestell page 87). Because they do not require as much energy as other types of surface slaps, a whale may repeat pec slaps for quite a long time.

– Breach: Less often, humpback whales may breach. In a breach, the whale propels more than half of its body out of the water. It turns in the air about its long axis, then falls back to the water. There’s a mighty splash, followed by a geyser-like plume of water.

– Spy Hop: Humpback whales may also rise straight up out of the water rather slowly. They turn the head to scan the surroundings, then slip back below the water. It’s called a “spy hop” because to us humans it appears that the whale is hopping up to look around.

You might think that this describes all the forms of whale behavior easily observed. However, if you take a whale watching cruise you will be overwhelmed by even more activities on display when humpback whales interact with one another. 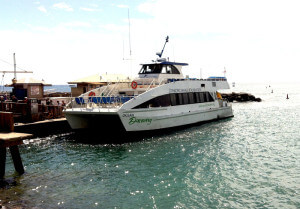 We know rather little about how whales feed. And we know practically nothing about their birthing and mating habits. Perhaps it’s because these occur far below the surface or at night, and because researchers are loath to disturb the whales.

However, two activities always occur at the surface where we can readily see them up close. These are mother-calf interaction; and male competition.

Although boats are not allowed to approach within 100 yards, that’s rather close to observe an animal that may be fifty feet long. Moreover, whales often choose to approach your boat or even swim under it, in which case you shut down the engine and enjoy the show.

The newborn calf cannot hold its breath for long and must stay near the surface. Thus the mother stays just beneath, coaching it on whale behavior and being available for frequent nursing.

Near the mother will often be an adult male “escort.” DNA testing has shown that successive calves from one mother have different fathers. For that reason, we believe the escort to be a hopeful-father-to-be rather than a loyal father hanging around with the family. The calf models its behavior on the adults. Sometimes you will see one of the adults do a fluke-up dive. And then the amazingly much-smaller calf will perform an identical dive!

When watching from a boat, there’s more going on than just the mother, calf and escort. There is always another male nosing around. He hopes to nudge the escort out of the way, or lure the female to join up with him.

When she has just birthed a calf, there’s only a small chance that she will ovulate again soon (“postpartum ovulation”). However, even that small chance is enough to attract considerable attention from suitors. There may be as many as 25 whales in a “competition pod,” although there are usually a dozen or less.

We generally assume that the escort who manages to gain and maintain his position closest to the female is the one she will mate with. If that’s true, then there are many more males consigned to being “20 Feet from Stardom.” These poor creatures are out in the cold with no way to pass along their genes.

As a NOAA report states, “with a sex ratio at birth of 50:50…if the majority of females follow a two or three year birth cycle, then there are many more sexually mature males than fertilizable females in any one season.” Well, maybe next year!

Science Speculation: In general, humpback whales engage in a variety of activities that we poorly understand.

We assume they are competing to mate via elaborate behaviors, “dances” if you like. We also observe that as in many species, a number of males seem to be “wallflowers.” They are destined not to have the fame of being a part of the next generation, at least not yet. However, much more mysterious are the songs of humpback whales.

The sounds whales make can travel for dozens of miles underwater. You can hear them by finding a very quiet stretch of coast and immersing your head in the water. Unfortunately, that “very quiet” coastline may be hard to come by, what with beachgoers, surfers and the sound of the waves themselves. So the best way to listen to humpback whales is on a boat.

Suppose that you take a whale watch boat trip during your Maui vacation. The crew of a well-equipped boat will at some point turn off the engine and lower a hydrophone – essentially a waterproof microphone – into the water. It picks up sounds made by humpback whales and amplifies them for the boat’s loudspeaker system, to the astonishment of the passengers.

And astonishment is the right word, the first time you hear whale songs. That’s because the whales don’t sound like gigantic, stately creatures at all. Instead, they sound like a cacophonous barnyard with mooing, grunting, squealing and grumbling. You’ll also hear sounds like the chat-chat-chatter of birds.

A hydrophone dropped anywhere in the ’Au’au Channel produces such a variety of sounds that it’s hard to imagine them coming from any single species of animal. Here’s a one-minute sample that I recorded 2/1/2018 from the Pacific Whale Foundation’s Ocean Quest boat:

Have you seen humpback whales in person?  What activities did you observe?