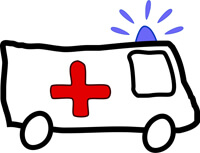 Science Fact: Hospital infection poses a deadly risk to every patient. One in twenty-five U.S. patients acquires a hospital infection. Alarmingly, 100,000 patients per year die as a result.

The longer you are under care, the greater the risk that instead of achieving surgery success, you will suffer a serious or fatal hospital infection. This post describes the nature of the problem and some high-tech solutions. We then propose how to think about this problem when you are faced with checking yourself or a loved one in for medical care.

Caution: This is a long post. If you’re only interested in the recommendations, how to protect yourself from hospital infection, skip to the last section, “Buyer Beware.”

The Extreme Seriousness of Hospital Infection

Hospital infection, often called hospital-acquired infection or HAI, has always been a serious concern. However, that concern has now escalated to near-emergency status. That’s because deadly diseases now exist for which there is practically no cure. Three especially bad actors are MRSA (methicillin-resistant Staphylococcus aureus), CDI (Clostridium difficile infection) and VRE (vancomycin-resistant Enterococcus).

After every surgery, medical staff thoroughly clean and disinfect the operating room. And the same is true for every hospital room after its patient departs. But these three acronym-laden microorganisims are so difficult to eradicate that they linger on even in the ultra-clean hospital environment. They await the next patient, who perhaps is already weak due to disease.

And what happens when the left-over bacteria from a previous patient hit the new arrival? He may acquire a very difficult-to-cure hospital infection on top of whatever reason brought him to the hospital in the first place.

How Hospital Infection Caught My Interest

My attention was drawn to hospital infection by an article forwarded by my friend Tam Mossman. The article is “Innovator: Mark Stibich’s Hospital-Disinfecting Robot.” The writeup showed an earnest-looking man taking the top off a shiny device vaguely resembling R2-D2 in Star Wars. It seems that his machine uses ultraviolet light to kill germs in hospitals. It’s a “robot” not in the sense that it walks around or talks to you, but because it does things autonomously. You leave the room and turn it on remotely. It then raises its lamp and goes through an operating sequence to disinfect the space around it.

The article mystified me. I wondered: what’s new, anyway? And where’s the science? Everyone knows ultraviolet light is a disinfectant, and hospitals have problems with hospital infection, so one plus one is obviously two. Is this article simply some company’s efforts to promote its common stock or sell its products? No, not completely, as I learned.

Physicians who read this post will sigh in exasperation at my physicist’s ignorance of such things. Nevertheless, I discovered that preventing hospital infection is not a simple technical problem. Instead, it’s an interwoven battleground of science, politics, incentives, economics and, yes, genuine concern for health and lives. Although “everyone is doing everything at once,” I will display the pieces in a way that makes the most sense to me.

It’s a hundred and seventy years since Dr. Ignaz Semmelweis, the “savior of the mothers,” advocated hand washing by medical personnel. He showed how simple cleanliness could drastically reduce deaths of new mothers due to hospital infection. However, even as recently as 2006 a professor of Pediatrics at Harvard Medical School bemoaned the fact that healthcare providers are not yet following well-known necessary steps for hand washing to prevent hospital infection.

Individual physicians, hospitals, groups of hospitals and caregiver organizations conduct many hygiene programs. The sponsors want to improve medical care and reduce mortality due to hospital infection. For example:

However, because two hundred years of voluntary compliance have not done the trick, it’s not surprising that more heavy-handed programs have come into favor.

Besides the human cost of hospital infection, there’s an economic cost as well. That has helped motivate programs by insurers and government to impose financial incentives to improve hospital performance, including reductions in hospital infection.

Medicare’s Hospital Value-Based Purchasing Program rewards hospitals according to the quality of care they provide. Another example is the State of Maryland’s Hospital-Acquired Conditions Program. It provides penalties and rewards to medical facilities according to their incidence of hospital infection.

Every healthcare setting has cleaning procedures to prevent hospital infection. Those incorporate surface wipe-downs with a variety of disinfectant liquids. Bleach is cheap and effective, and a standard for comparison.

It’s tedious to wipe down every surface thoroughly enough to eliminate bacterial contamination. Healthcare managers would prefer to simply saturate the air with some chemical that will kill the microbes. Unfortunately, most chemicals that are hell on bacteria are also hell on hospital equipment, beds, sheets and walls. As a result, companies that have taken the vapor route rely largely on hydrogen peroxide. It’s a chemical that is very reactive against infectious agents but which decomposes into two pretty harmless materials: water plus oxygen. Hydrogen peroxide is a well-known chemical with many household uses for sterilizing and deodorizing.

One approach for sterilizing an area such as an empty hospital room is to use an aerosol. A staff member squirts a weak solution of hydrogen peroxide and other disinfectants through a nozzle to produce a fog of submicron-sized droplets. If this fog disperses throughout the room it can reach the “back side” of objects such as call buttons and TV remotes that the next patient is likely to touch.

However, keeping the hydrogen peroxide fog optimally reactive requires careful control of room temperature and humidity. An alternate approach is to ionize the fog droplets with an electric discharge. Advocates claim that the ionized particles do a better and more complete job of killing microbes.

The 1976 outbreak of Legionnaire’s Disease in Philadelphia was associated with 34 deaths. The cause of this tragedy was bacteria breeding in the cooling tower of a hotel air conditioning system. Healthcare and engineering professionals collaborated to find a way to prevent future recurrences. They soon fastened on the “C” band of ultraviolet light, 100 to 280 nm wavelength, which has been found to be effective in destroying bacteria and spores.

A standard fluorescent lamp uses a low pressure of mercury vapor that emits ultraviolet light when excited by an electric current. 85% to 90% of the radiation is in a strong emission line of mercury, at 253.7 nanometers in the ultraviolet C-band. A household fluorescent lamp uses a phosphor coating that converts about 45% of the ultraviolet light to visible light. However, for disinfecting purposes the manufacturer omits the phosphor, allowing the lamp to emit UV-C radiation directly.

Ultraviolet germicidal irradiation (UVGI) using mercury lamps has become common in new air conditioning installations and is now mandatory thanks to a number of standards. For example, Section 5.8 of the General Services Administration 2005 Facilities Standards states “Ultraviolet light (C band) emitters/ lamps shall be incorporated downstream of all cooling coils in an air-handling unit, and above all drain pans to control airborne and surface microbial growth and transfer.”

When attention turned to preventing hospital infection it was natural for makers of ultraviolet lamps to offer their devices as a supplement to traditional cleaning techniques. A hospital may permanently install UV lamps, for example in an operating room, or bring them in as a portable system.

It’s important to note that the experts working in this area view all these high-tech approaches as merely an adjunct to traditional cleaning. The head of the Duke University team says, “We would never propose that the UV light be the only form of room cleaning.”

Not all ultraviolet lamps are created equal. The latest but probably not the last approach to hospital room disinfection is the Xenex system in Business Week (now bloomberg.com), MedCityNews and the Johns Hopkins alumni newsletter. The Xenex room-cleaning robot uses pulses of ultraviolet light from a lamp containing xenon gas rather than mercury vapor. The xenon lamp produces a wider spectral range of ultraviolet than mercury, and intense pulses rather than continuous radiation. These factors lead to a claim that xenon is “several times more effective” than mercury.

A video shows the system operating in an empty hospital room. Their invention computes the parameters of the room to control the placement and operation of the UV system to minimize the required time to clean.

Is a xenon UV system in fact an advance in the battle against hospital infection? Xenex provides a list of studies at a variety of U.S. medical centers. A review of the research articles is revealing:

We would all like to believe that the healthcare profession consists of dedicated and altruistic practitioners who live to make us healthier and only incidentally make a living out of it. And there is great truth in this supposition.

However, it’s also true that medicine is a big and complex business. It requires the cooperation of many different specialists using constantly evolving technologies. Organizing this kind of work has become the task of hospitals and hospital systems. And they pursue their altruistic aims only within the constraints of cost control and insurance reimbursement schedules.

This is a long way around of saying that controlling hospital infection is an economic activity. The technologies described above are businesses jockeying for position in the medical marketplace.

Medical research studies describe themselves as ways to save lives. But every study also has subtexts similar to these:

I could not find a single study comparing all the principal cleaning procedures and equipment to find out which if any are the best. Perhaps as hydrogen peroxide and ultraviolet systems proliferate, a public health agency or foundation will run systematic studies to identify the “best” protocols.

Until every hospital learns and follows the very best approach for controlling hospital infection, going to the hospital is “buyer beware.”

Is the hospital using the most suitable technology? Has it trained its employees on how to use the equipment properly? And does the staff in fact take the time to follow hygiene protocols? There is no good way to know.

The best you can hope for is to compare the hospital infection rates between different hospitals. You can also find out whether your preferred hospital has been improving its numbers in the last few years.

Unfortunately, only twenty-seven states require public reporting of hospital infection. That is rather a crime, because such laws have led to dramatic improvements in the states that passed them.

Organizations like Consumer Reports offer survival advice to patients. Also, for subscribers they rate hospitals for safety according to carefully-thought-out criteria. In addition, any hospital with a strong hygiene program will be proud of its accomplishments and will help you understand the data that is available.

At our present state of understanding, the most important factors in reducing hospital infection arise from the staff themselves.

The better hospitals make hygiene and infection control a major objective that is always kept in sight. They train people and measure their performance. They use supplemental cleaning tools such as ultraviolet light. And they insist not only on fancy equipment but also basic hand washing and glove changing.

These hospitals are doing as well as we can do today at eliminating hospital infection and assuring surgery success. Consequently, they are the safest institutions to entrust with your health.

For details about how one hospital is battling hospital infection, see my later blog Hospital Surgery 1.

You always want to know that a hospital is expert at the procedure they are going to perform. But do you also check their track record for hospital infection?