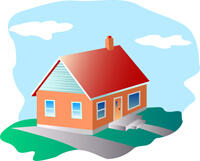 Science Fact: Not So Big is the phrase coined by architect Sarah Susanka in a series of very readable books beginning in 1998. I discovered her first book, The Not So Big House, within a year after buying my last house in Malibu, California. “Last” not because I expect to die in it, but because I sold it two years ago and have no current reason to move back to Malibu.

The Not So Big House is actually a gigantic idea for our time. I was tremendously impressed with Susanka’s concepts from my first exposure to them. If I had seen her book a year earlier, I would have bought a house much smaller than the 3,400 square feet hillside home I fell in love with.

Susanka argues persuasively for “quality rather than quantity.” Buy no more square footage than you need, she says, and you will have plenty of money in your budget to have a spacious-feeling design, a functional layout, high quality finishes, a better quality of life and money in the bank. (Incidentally, you’ll be saving the world’s resources for your grandchildren, but who among us lets that determine his buying habits?)

What spoke to me most convincingly was her notion that every part of the home should be useful, or beautiful, or both – otherwise, it’s simply wasted money. One corrolary of that concept is to try to make every space in the home functional. Ideally, a space you can use every day, or if not that then every week.

If slavishly followed, this notion takes me places that I personally don’t want to go. Susanka’s parsimony extends to bathrooms and I don’t buy that part of her thesis. I want to have space for guests, and I want them to have their own bathroom as a courtesy. However, the rest of her story, to use every room of the home, strikes me as a brilliant observation of something that we tend to overlook.

Consider for a moment the implications of her design philosophy. How about that guest room? Make it double-duty by adding a hobby area or a home office in the corner of that room. How about that formal living room or dining room? Use it, re-use it, or consider opening up some walls. Feeling pinched for space? Track where and how you spend your time at home and you may find that you have rooms that you hardly ever use, that are candidates for rework. Best of all, when we adopt Susanka’s philosophy our present homes become big enough for all our needs, given some creative planning.

In 2008 Susanka expressed her design ideas nicely in a four-minute video. Her website (notsobighouse.com) and the links on its Contacts page are great sources for ideas.

I was reminded of The Not So Big House when I read a blog “Is this where you can cut the most the quickest?” by William Cowie that appeared on a site I consider very worthwhile, GetRichSlowly.org. Cowie analyzed the average U.S. family income in 1913 and 2012 in a nice simple table that he later corrected here.

With or without the correction, here are the numbers that jump off the page:
– In 1913, the average family spent 35% of its income on food; 30% on housing; 15% on clothing; and 10% on transportation. Everything else was much smaller, with income tax bringing up the tail end at 1%.
– In 2012, the average family spent 34% on housing; 20% each on transportation and income taxes; 10% each on food and health care; plus smaller items.

Total family income rose by 3.5 times in constant dollars during this hundred-year period, so housing cost not only got bigger than everything else, it also represented a lot more expenditure. House size stayed constant at about 1000 square feet from 1900 until after World War II; at that point, houses started getting bigger and are now well over 2,000 square feet (the numbers you see range from 2,200 to 2,700 depending on the source and the way they are calculated). One of my previous posts commented on ballooning kitchen sizes as a part of this trend.

Why did houses get bigger? It’s partly due to easy-to-get mortgages, and partly due to “I want it.” As the U.S. recovered from the 2008 recession, we also re-acquired an attitude of “bigger is better” and CNN heralded the return of the McMansion.

Science Speculation: The Small House Movement got a boost from Sarah Susanka’s attempt to reverse our thirst for more home than we can actually use on a day-to-day basis.

However, idea of smaller houses also brings out a competitive streak in some folks. These “tiny house” advocates seem impelled to brag “my house is smaller than your house” and take a good idea far past its point of common sense. The resulting tiny houses, typically ranging from under 100 to 300 square feet in size look crazy to most people. Not only are these very small homes not acceptable to mainstream America, they attract ridicule that distracts people from the eminently sensible Not So Big approach. In my always-humble opinion, the tiniest of the tiny houses have more to do with a hunger for publicity or a pathological Puritanism than with sound principles for living.

Does the Not So Big House resonate with anything in you? Are there any ways to make more effective use of living space you already have?