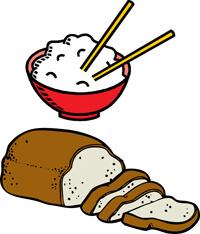 Rice, wheat, meat. Each is a healthy food, but they are different. Does what we eat affect our ability to innovate? How about what our great-great-(40 greats)-grandparents ate?

We might expect a nutritionist or a geneticist to study those questions. However, today it’s a team of psychologists led by a graduate student (PhD candidate) who found a new and rather convincing answer.

If you prefer to go right to the sources, the May 9 issue of Science Magazine has the original article (4,300 words worth). There’s also a Perspective one-third as long. The research team consists of seven psychologists from the U.S. and China with Thomas Talhelm of UVA as first author. The Perspective, a very readable summary, comes from Joseph Henrich, a Canadian psychologist and economist.

Tracing the History of Big Innovations

The question motivating the work is a historical one. One of the largest social changes in recorded history is the Industrial Revolution.

How did it happen that this explosion of innovation occurred in Europe, and not until just a few hundred years ago? Well before the Christian Era, Egypt, the Indus Valley, China and Persia had powerful, wealthy and highly advanced civilizations. What made 18th-century Europe different?

Directly comparing Europe with Asia and the Middle East is hazardous. Most psychological research has been performed by and about people from Western developed countries. However, these “Weird” (Western, educated, industrialized, rich and democratic) folks are not at all typical of the world’s population. In particular, Westerners are more individualistic and think more analytically than their Asian cousins.

Here’s what is meant by those terms:
– Individualistic people see themselves as independent from others, and acquire relationships outside their clan or religious group. In contrast, Collectivistic people stick close to their kinfolk.
– Analytical thinking implies understanding complicated things by developing categories and rules that describe the component parts. Holistic thinking tends to look at relationships rather than categories.

Why Did the Industrial Revolution Happen in the West?

Researchers have found that people who are independent-minded and analytical are also innovative. So if we want to know why the Industrial Revolution happened in the West, perhaps we should back up and ask instead, why are Westerners more individualistic and analytical?

Some scientists have adopted the “modernization” hypothesis. This postulates that as societies become wealthier and more educated, they become more individualistic. However, that seems to be contradicted by Japan and Korea. People in those countries tend to be collectivistic despite their countries’ wealth and advancement. Thus once again, it’s hard to find the answer by comparing different countries.

The Talhelm team’s clever answer was to look within a single country – China – for clues to these global differences. China is practically a world in itself, with diverse climates and ways of life. Moreover, other factors that might confuse the study – genetics, cultural traditions, government, religion – are relatively consistent across the country. This consistency is especially strong if you focus on the Han ethnic group that constitutes 92% of mainland China.

How Rice, Wheat and Other Foods Shape Societies

Perhaps the most fundamental force shaping a society is where its food comes from. From China’s first recorded history the principal sources of food have been rice, wheat and herding. Those have been geographically centralized due to climate, water availability and topography. Herding has dominated in the Northwest (Xinchiang and Mongolia). Wheat-growing in the colder Northeast. And rice paddies in the moister South.

The researchers noted that paddy rice cultivation is much more labor-intensive than wheat-growing. So much so, that a man and woman could not grow and harvest enough rice to feed a family with only their own labor. It was necessary to cooperate with one’s neighbors, staggering the time of planting and then sharing heavy work during the short harvest time. Many centuries of inter-family cooperation, enforced by the need to eat, could have created a culture of collectivism and holistic thinking in the rice-growing parts of China compared with the wheat areas.

The research group postulated that people who grow up in rice-growing and wheat-growing parts of China, even though they may have never lived on a farm, will show differences in individualism and analytical thinking. In other words, cultural differences caused originally by the need for healthy food might still determine the way people think and behave, millennia later in a highly industrialized and educated society. That is really a Big Idea!

Once Talhelm and his team had the Big Idea the actual research, although ambitious, was more straightforward. They tested 1,162 Han Chinese university students from six locations across China. These locations were North (Beijing), Southeast (Fujian), South (Guangdong), Southwest (Yunnan), West (Sichuan) and Northeast (Liaoning).

The researchers used three standard psychological tests to measure how the students thought:

The researchers found that students from rice provinces were consistently more holistic and more collectivistic than those from wheat provinces. These differences were distinct even between immediately adjacent regions, and despite the fact that these were university students, not farmers raising rice, wheat or other crops.

Rice, Wheat and Patents for Inventions

One measure of innovation is the issuance of patents. Since people from more individualistic cultures tend to hold more patents, you would expect that rice provinces would produce fewer inventions than wheat areas. Talhelm shows evidence that this is the case.

Thus cultural habits of thought and action that were formed by local geography are still evident today, thousands of years later. As Henrich summarizes:

Environmental factors favor some types of family structures or forms of social organization over others. Honed and refined over generations, these institutions create the conditions to which children adapt developmentally, shaping their psychologies and brains. Long after their ecological causes have become irrelevant, these cultural psychologies and institutions continue to influence rates of innovation… As such, wheat farming may contribute to explaining…the industrial revolution.

The idea that the land shapes the people is not a new one. However, it’s startling to think that even after we have moved into an urban, technology-rich society, our thoughts and attitudes are still imprinted by our heritage. Nevertheless, there’s an emerging consensus among scientists that this is very much the case.

In my “Crazy For Nuts” post I called attention to books by Joel Garreau (The Nine Nations of North America) and Colin Woodard (American Nations). Those books trace how political positions today on issues such as gun control may have evolved from the occupations and way of life of the people who originally settled in various parts of North America.

Talhelm points out another book that touches on this same effect: Nisbett and Cohen’s Culture of Honor. These authors show evidence that because the resources of herders – their animals – are portable and easily stolen, herding as a way of life evolves a culture in which people must be vigilant and vengeful against theft or insult. The “culture of honor” that evolved among the herders of Scotland and northern Ireland was then transplanted to the southern U.S. by early settlers. According to the authors, that culture helps explain why there’s a higher homicide rate in the South than in some other parts of the country. Southern traditions insist that certain disagreements require a direct physical response.

In last week’s post (Stem Education #2) we saw that political positions, both left and right, keep us from thinking logically. And now we see that our political views themselves, along with our degree of independence and our very approach to thinking, may themselves arise from what our long-ago-forebears used to do to put food on the table. Homo sapiens, wise man? Perhaps we are instead Homo traditionalis.

As a digression, I note that Talhelm’s biography shows that four years of multi-cultural experience can pay great dividends. Not only did his visits to China lead to innovative and fascinating scientific research, but he also acquired a track record of published cross-cultural work with an international team, even before earning a PhD.

Rice, wheat, herding – what long-ago influences may have affected your attitudes when you were growing up, and now? Do these research results make any sense in light of what you know about yourself?