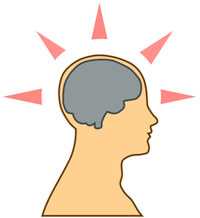 Brain sync popped up stage center with an article titled New Study Shows How Guitar Players’ Brains Are Different from Everybody Else’s. I thank Suzanne Evensen for calling this interesting story to my attention.

Some article headlines encapsulate a story in a few words; this one just opened up more questions. Who are we talking about here? Led Zeppelin? Jimi Hendrix? Andrés Segovia? And in the headline, what is meant by the word “different”? Superhuman? Freakish? Extraterrestrial?

The article referenced an article published in late 2012 by three German psychologists and also reported by Wired UK. The researchers recruited thirty-two guitarists whose ages ranged from 20 to 58 years, who had been playing guitar an average of 23 years. They took two guitarists at a time and wired them up to EEG machines with 64 electrodes on each person’s scalp (ouch!). The guitarists then played a duet while their brainwaves were being recorded.

The psychologists analyzed the brainwaves in two frequency bands: the slow delta waves that are especially dominant in deep sleep, and the faster theta waves. They found that brain sync occurred: the electrical waves of both players’ brains became synchronized as they played, going up and down in phase with each other. In each duet, the researchers assigned one player the role of “leader,” to initiate play and lead changes in the tempo. They found that the leader established a brainwave “beat” within his or her brain prior to a tempo change, and the other player then picked up on it and fell into brain sync with the leader. Thus the leader not only led the music, his brain also led the other player’s brain.

This whole experiment reminds me of the Vulcan “Mind Meld” in Star Trek. A guitarist Mind Meld?

What’s going on here, and what is it good for? I knew you were going to ask, and let’s try to find the answers.

This study fits into a research area called Interpersonal Action Coordination. The desire and need to coordinate our actions with others is fundamental to social interaction. This need is so strong that when we listen to music, even if we don’t consciously move, our internal attention is “entrained” (synchronized) to its rhythm. You can observe a similar effect if you are walking along, hear music, and find your footsteps matching the beat of the music without your conscious effort. In recent years psychologists have treated the mind and body as a unit that jointly initiates and responds to social interactions.

Behavioral observations are being more and more supplemented by actual brain recording using functional MRI or, as in the German study, EEG. And at least when the interpersonal action involves music, brain sync is one of the results.

We might wonder, are the brain waves just following the beat of the music? I don’t think so. The music beat in the study, as set by a metronome, was 80 beats per minute which equals 1.33 beats per second (1.33 Hz). Although this falls within the lower part of the delta wave range, theta waves were also synced, so the brain waves are not simply following the beat. Also, both delta and theta waves are many times lower in frequency than the vibrations of the actual music, so they are not syncing to the actual sound waves. In addition, the way the brainwaves behaved in leader versus follower show that an actual brain sync is occurring.

Science Speculation: When the New Age movement popularized the practice of meditation, eager researchers studied brain waves during meditation and experimented with biofeedback to enhance the meditative state.

People have experimented on themselves for at least four hundred years. The hippie culture was quick to embrace self-experimentation, especially with the advent of LSD and other recreational drugs. This simply added to what the academics were doing in their labs.

From Life Hack to Brain Hack

The simultaneous development of digital computers led to the term “hacker” to describe a person with a desire to get something done, preferably by a quick short-cut. The “something” hackers in the early 1960s wanted done was often to make free long distance calls by tricking the phone system, or to break into a school computer system to change grades. Today of course the geek world has embraced the term “hack” to describe tinkering with something, destroying it and reassembling it in a creative way to achieve a practical or aesthetic end. A Google search on “life hack” uncovers a wealth of folks who believe they have the answers to everything! [Today, a hacker may not be a breaker of the rules – we reserve the term “cracker” for the kind of hacker who wants to break into your computer and send spam to everyone on your address list.]

LSD experimentation was what you might call a brain hack in that stoners knew they were tinkering with their brains, and were willing enough or crazy enough to take the risks involved. Today people are experimenting with brain sync as today’s version of brain hacks. In this context, brainwaves are generally synced with each other, or with an external stimulus. The stimuli are typically rhythmic sounds, sometimes different in each ear, and pulses of light; however, some brave brain hackers use direct electrical stimulation. As long as you’re not subject to epileptic seizures, these kinds of inputs can produce brain sync.

Of course, if a hacker can do it, someone will want to make a buck off it. So today you can easily find marketers who are not trying to hack themselves, but rather to hack their way into your wallet. People who sell equipment, CDs and DVDs for brain sync claim that their stuff can improve your concentration, deepen your meditation and turn you into an intellectual super-being (OK, I just added that last part).

Much current research work is focused on understanding how the brain communicates with the outside world, and how the environment in turn affects the brain. A list of publications at the Stanford neurology lab run by Prof. Parvizi shows the typical breadth of research at one of many fine institutions.

Even before we figure out exactly how the brain works, if that day ever comes, a sharper understanding of this two-way interchange has useful medical applications, as we shall now describe:

– Prosthetics. Artificial limbs are rapidly advancing to assist those with physical disabilities. The FDA recently approved the DEKA Research “Luke Arm,” for use by upper arm amputees. This particular device is controlled by electrical activity in the user’s still-active muscles. Other devices, still experimental in nature, are being controlled directly by brain signals.

– Mental Disorders. Mental disorders affect a tremendous number of people. Surveys conclude that one-fourth to one-third of all human beings suffer from a diagnosable mental disorder at some time during their lives. Brainwave feedback training has helped veterans suffering combat-related stress. Recent work has shown that schizophrenia may be linked to abnormal brain waves, holding out the hope that brain wave treatment could be used to treat or cure this and similar mental diseases.

– Alzheimer’s Disease. Alzheimer’s disease is characterized by an accumulation of “plaques,” fibrous chunks of protein, in the space between the cells of the brain. These plaques are mostly made of beta amyloid, a substance that is found dissolved in the interstitial fluid. Researchers found that deep sleep decreased the amount of dissolved beta amyloid, so that stimulation that coaxes the brain into deep delta-wave sleep might slow the progression of this disease.

– Brain to Brain. We’re not at the Mind Meld stage yet, but researchers are already experimenting with direct human brain-to-brain interaction. The related field of brain-machine interface could lead to another type of Mind Meld, between a human brain and an artificial intelligence. Don’t hold your breath for this to happen, but scientists are indeed traveling down that road!

Do you feel you have experienced “brain sync” when collaborating with another person on a task involving high concentration?