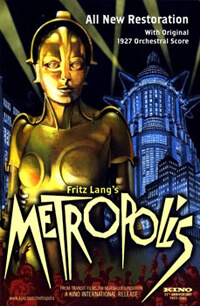 Science Fact: A fifty year future forecast! Our future starts in the past with this poster of Fritz Lang’s 1927 film Metropolis as restored in 2010 and available for purchase on DVD.

Metropolis, the first film to show a robot, was prescient in several ways:
– Lang’s metallic humanoid robot “Maria” anticipates many subsequent interpretations of robots: in entertainment, such as Threepio in Star Wars; and in real-world robotics
– The concept of a robot that could convincingly masquerade as a human anticipates the most advanced robotics work today
– When Lang invented the robot, he could have given it any shape, and if the story line called for it to pose as a human, it could equally well have resembled a male. However, Lang chose a female shape with obvious breasts, perhaps reasoning that “sex sells.” James Cameron made a similar choice in the film Avatar.

This blog has previously commented on the difficulty of making predictions. But prediction is on offer right now, in an rather ambitious chunk: a fifty year future!

IEEE (formally, the Institute of Electrical and Electronics Engineers) is the world’s largest professional society, with almost a half million members. It publishes Spectrum, a readable and highly respected magazine whose articles I have sometimes referenced. The June 2014 issue of Spectrum celebrates the magazine’s 50th anniversary with eight articles constituting a fifty year future forecast of the great technologies that may change our lives.

I started reading the articles and got that déjà vu feeling. I suddenly realized that Spectrum was telling me stuff I had blogged about here! Is this a case of Great Minds Thinking Alike? Or are all us technology folks sipping through the same Koolaid straw?

The “fifty year future” issue has some fascinating and readable stuff in a dozen articles totaling 30,000 words. For you, that might be, as my friend Jim Blue used to put it, like the book about elephants – it tells you more than you wanted to know. Too Much Info.

Each article has a great feature that should be mandatory for forecasting: after lauding the glorious prospects of a technology, they answer the question “What Could Go Wrong?” to expose the pasty-looking soft underbelly of the beast.

Here I’ll offer the short version, the CliffsNotes version of our Fifty Year Future, highlighting a few goodies that may inspire you to read the longer articles through the links I provide. I’ll also include references to my earlier posts, which so far as I can see are consistent with what Spectrum offers.

“Fifty years out…we will have largely eliminated disability.” And they aren’t just referring to physical disabilities but emotional and intellectual ones as well. I was fascinated to learn that more than 100,000 Parkinson’s disease sufferers have had electrodes implanted in their brains, providing electrical pulses that suppress their symptoms.

What could go wrong? Think about wealth inequalities and the likelihood that enhancements will be primarily available to those who can afford them. Says a professor in Wellington, New Zealand, “What are the dating prospects between someone who has access to cognitive enhancements and someone who hasn’t?”

“All the mass we’re ever going to need to explore in space is already in orbit. It’s just in the wrong shape.” And this concept drives two technologies that might make unlimited space travel suddenly affordable: making water out of materials on the moon or asteroids; and 3-D printing of solid objects in low or zero gravity. Taken to the limit, you build a machine on the moon that can fabricate any object from the raw materials available there. And “any object” of course includes building a replica of itself, and space vehicles to explore the planets and beyond.

What could go wrong? Funding for space technology and space exploration is always uncertain. And then when you arrive at asteroid Ceres, international law is foggy about whether you have the right to stake a mining claim there.

Artchester.net articles: Toys in Space; but robots that can make copies of themselves, not yet!

Today, the field of engineered materials creates materials with new properties, building them from the molecules up. And 3-D printing can create ones and twos of any desired structure. But what if you could use an advanced form of 3-D printing that could build huge numbers of microscopic robotic machines that could assemble themselves into any shape? These “claytronic” devices could make solid objects in any physical form, perhaps even functional ones like tiny surgical tools.

What could go wrong? If hackers can invade software and create havoc, imagine the disorder if they can reprogram physical objects at will. As Spectrum warns, “when…everything is possible, not all of what goes on will be good.”

We have discussed the “Uncanny Valley,” the phenomenon that causes us to see machines that are almost life-like as annoyingly creepy. Spectrum pinpoints The Curious Case of Benjamin Button (2008) as the first instance in which a digitally generated Brad Pitt was just as convincingly real as the genuine Brad Pitt. As the cost of computation keeps going down, coming years will bring digitally generated actors in movies, interactive video games and apps.

What could go wrong? Children who grow up interacting with computer-generated characters who seem to show genuine emotion may have trouble decoding the emotions of real people, and might even prefer their fake digital friends to real people.

Smart and agile power systems will let every home and business generate, store, and share electricity. How to integrate these ubiquitous power sources into our existing electrical network is a puzzle that is being addressed by an ambitious energy experiment in Fort Collins, Colorado.

What could go wrong? In five U.S. regions, the cost of producing your own electricity is about to become cheaper than buying it from the local utilities. When it becomes economical to “do it yourself,” defections from the electrical network may create a crisis as we figure out how to blend both large and small sources of power.

Artchester.net articles: The vulnerability of the national electrical grid is a major theme in Death By Probability

Self-driving vehicles are already being used in controlled traffic situations such as mining operations in Australia. Spectrum makes a fascinating prediction: in 20 years, cars won’t need your help to drive themselves; and in 30 years, they won’t take your advice. In other words, in the interest of safety and travel efficiency, we will mostly be relegated to the role of passengers, not drivers, even in our own cars.

What could go wrong? It’s hard to imagine self-driving cars being able to avoid every single accident. When an accident occurs, media attention may make the public conclude that robotic cars are inherently dangerous, no matter what the statistics may say.

7. My Body Equals My Computer

Smartphones are evolving into Google Glass and beyond. Soon it will be commonplace to have computers installed in our clothing and even in our bodies. Our computers will know us better than we know ourselves, for better or for ill.

What could go wrong? Today many smartphone apps monitor our location and transmit it to advertisers. If our body computers know not only where we are but things like our blood pressure and our emotional state, can we control where that information is leaked?

Forget the Roomba vacuum cleaner and your kid’s robot toys. Where are the honest-to-God servants who can care for the elderly, baby-sit and maybe even fold the laundry? Spectrum forecasts that domestic robots will include simple machines that can only do one task, plus a few flexible devices with all the manual skills of a human, if not more.

What could go wrong? Some folks worry that if robots become too capable, they will constitute a “superior robot species” that could eventually compete with humans or even exterminate us.

Science Speculation: I am unabashedly enthusiastic about the great job Spectrum has done with its Fifty Year Future Forecast issue. However, because of IEEE’s engineering focus, the magazine chooses not to discuss at least two medical technologies that are equally important if not more so:
– Stem Cell research and its immense promise (see Stem Cells #1 and Stem Cells #2)
– Replacement Organs to take over for our ailing or failing inner parts (see Replacement Organs and Self, Dementia & Sanity

In the Spectrum Fifty Year Future issue, I recommend their slide show of Hollywood films predicting the future, in addition to the great articles summarized above. Oh yes, there’s even a science fiction story about the unintended consequences of technology.

Image Credit: Poster on Wikimedia from 2010 restoration of Fritz Lang’s Metropolis. Claimed as fair use of copyrighted material because of its low resolution, its use to identify and describe the film in a critical discussion of the film, the absence of an equivalent free image, the inclusion of a link to purchase the film on DVD, and the fact that this low-res image cannot be used to replace the original poster or its role in marketing the film.