Science Fact: Handwriting is an educational supertool. It can develop your kids’ fine motor skills as well as their fine thinking skills. And it may even help overcome dyslexia!

A New York Times article is the most recent example of a call to recognize the value of handwriting in the school curriculum. To discuss this subject clearly we need some definitions. Popular usage varies, and dictionaries reflect that variation. For this blog, however:
– Handwriting means writing formed by hand motion in which many or all letters of a word are joined and in which writing progresses in a single direction (such as, left to right). In formal cursive handwriting all letters are joined. In other styles such as Italic script letters are joined only when easy and efficient.
– Handprinting means writing in which letters are separated from one another.
– Blockprinting means handprinting in which letters are formed using only straight lines and circular arcs. This is also known as ball-and-stick writing or manuscript.
– Typing means writing using a keyboard.

You will see articles proclaiming that “Kids Hate Cursive!” or that “Cursive Is Dead!” The Common Core State Standards (CCSS), adopted by forty-one U.S. states, require only the teaching of legible writing, and then only in kindergarten and first grade. However some states, including California and Massachusetts, have augmented CCSS to include handwriting.

We’re in the digital age, when keyboarding seems like a more essential skill. Kids hate handwriting. Even educators seem to be ho-hum about it. So, is handwriting still worth teaching?

Studies by psychologists suggest that handwriting is very important developmentally and should not be dropped from the core curriculum. The New York Times article quotes studies by Berninger et al (University of Washington), Montgomery (Middlesex University, UK) and James and Englehardt (Indiana University, Columbia University). These and other studies conclude a number of benefits from learning handwriting at a young age, preferably even before handprinting:

– Brain Development. Handwriting stimulates brain development and synchronization between the left and right hemispheres. This has been observed using functional MRI imaging and confirmed by measuring improved reading and idea generation. Handprinting, tracing letters, and watching others write – none of these provide similar benefits.

– Reinforcement. Handwriting reinforces learning by teaching children the English language in more than one form.

– Dyslexia. Handwriting helps dyslexic students because different letters are very different from one another (unlike b and d in handprinting).

– History. Learning handwriting allows students to read historical documents as well as family cards and letters from past generations.

– Student Success. The steps of learning handwriting (how to hold the pencil; use of the hand and arm; single letters; joined letters; immediate comparison with examples) provide progressive rewards, resulting in improved attitude and motivation that significantly help a child’s success in school.

These research results have an immediate application if you are home-schooling your child. However, we should all be concerned about whether our schools are building “superkids” or slackers who will become tomorrow’s adults. And I believe it’s valuable for us to understand how our brains work and help us interact with the world.

Science Speculation: The research on handwriting leaves some important questions unanswered:
– Non-Joined Languages. English handwriting joins letters together and that seems to aid dyslexics. What about languages where characters are not joined, such as Chinese or Japanese? Do people suffer more dyslexia as a result?
– Video Games, Anyone? Given that learning handwriting is great for brain development, are there other ways to get that benefit that might be more appropriate to our digital age? For example, does playing video games improve fine motor skills in general, or just make you good at playing video games? Would learning to play baseball or to play a musical instrument give just as good results as learning handwriting?

When we discuss handwriting, a particularly interesting case is Italic script. Niccolò de’ Niccoli was a fourteenth-century Florentine who collected and copied ancient manuscripts for himself and for his patron Cosimo de’ Medici. Niccoli was searching for a way to copy documents that was very readable but also very fast. He is credited with developing what we call Italic script.

Here’s an amazing fact: we think of cursive handwriting as faster than handprinting, and so it is. But the folks with the fastest and clearest writing today do not join all the letters as you would do in formal cursive: they only make the “easiest” joins. And when you look at the Italic script of the Renaissance, you see exactly the same thing: letters joined only when it’s convenient, without extra movement.

In 2014 when we need to write in a hurry, we type (hopefully we have learned to touch-type along the way). Therefore, today we treasure cursive and Italic script not so much for its speed as for its beauty.

That beauty has inspired some truly artistic fonts that only became possible when computer composition replaced physical typesetting. A great example is Zapfino, created by typeface designer Hermann Zapf. The best way to describe it is with an example of the font itself (click the image to enlarge it): 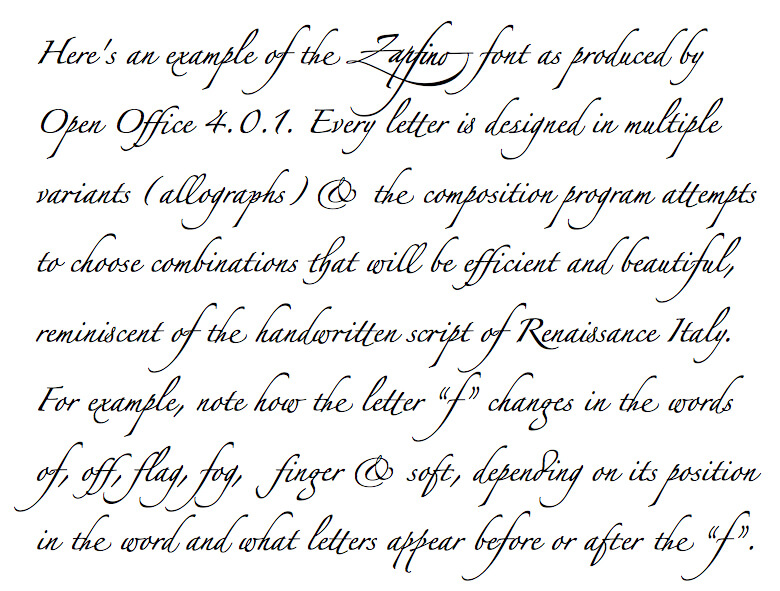 5 Reasons Cursive Writing Should be Taught in School | Resilient Educator

Why Writing By Hand Could Make You Smarter

The Benefits of Cursive Writing

7 Reasons Why Cursive Writing Should Still Be Taught in Schools