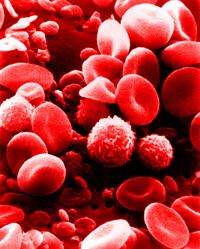 Science Fact: Platelets are as necessary to blood as blood is to human life. New research in platelets offers hope for treating cancer, inherited diseases and major surgery. And now platelets also give you a way to invest your money, not in gold or in technology, but literally in blood. Our story begins with science, yet also shows how science is interwoven with the world of business and promotion.

Blood is a complicated liquid. It helps cells and organs communicate through hormones and other messenger molecules. It helps regulate the temperature, acidity and other properties of the body. And it feeds and protects all parts of the body. Science still has much to learn about the details of this marvelous bodily system.

Blood is composed of a pale-yellow liquid, the blood plasma, within which are suspended the blood cells. Here’s a scanning electron microscope (SEM) photo of normal human blood (courtesy of photographers Bruce Wetzel and Harry Schaefer and the National Cancer Institute): 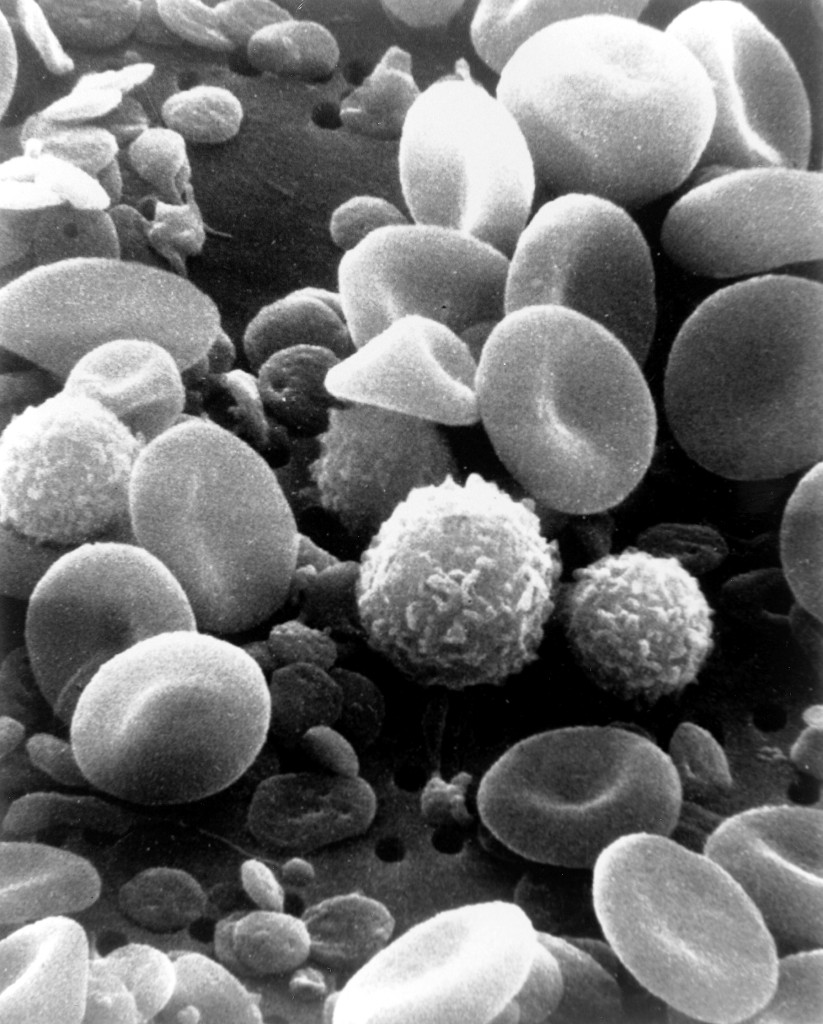 The image is so crowded with cells, it seems amazing that blood is mobile enough to even circulate! (Like most SEM photos, this image is monochromatic; the lead photo in this blog is false-colored for emphasis.)

When you look closely there are three types of cells in this photo, which are shown more clearly in the following image (SEM photo courtesy of National Cancer Institute): 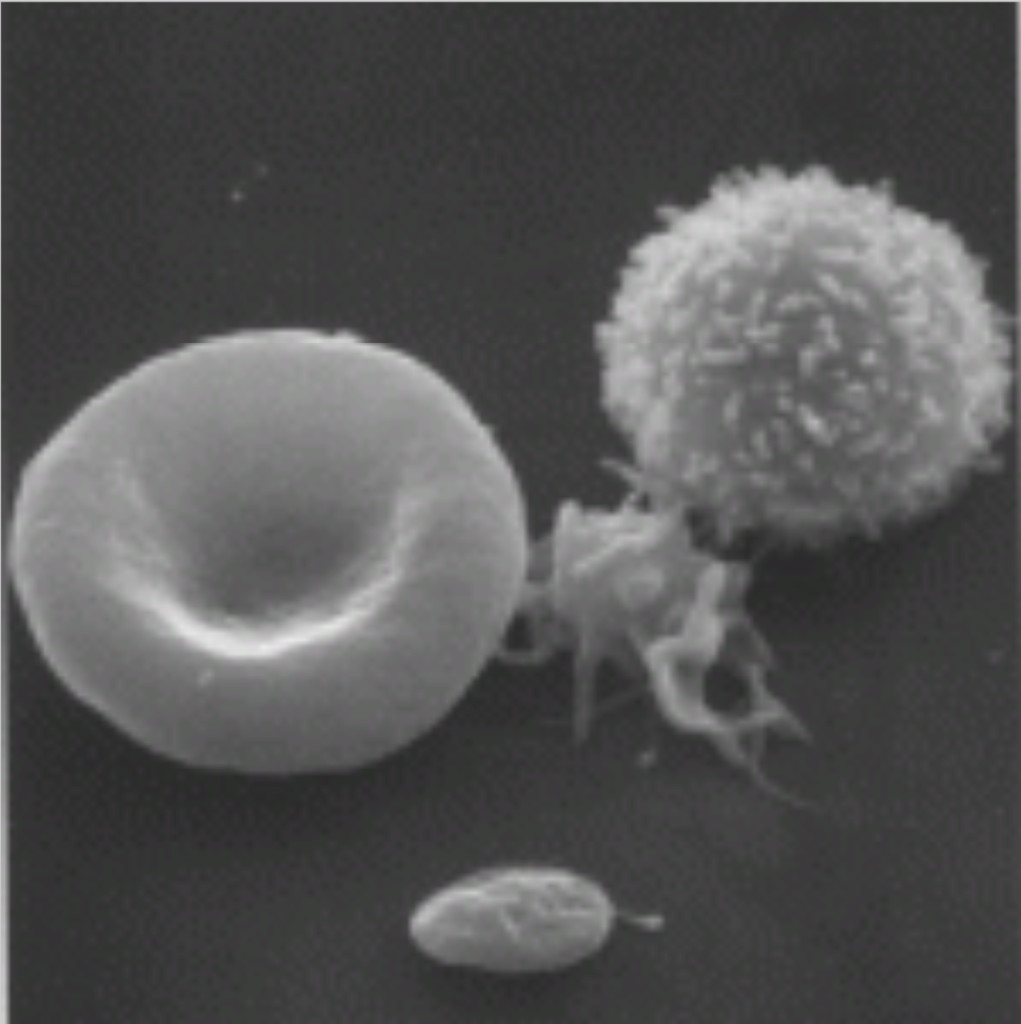 How Do Platelets Work?

Platelet activity is well described in an essay by Dr James George and in a Wikipedia article. Platelets are small and light-weight. Therefore, as the large red and white blood cells rush through the blood vessel, platelets are pushed to the outside and roll along the endothelium, the lining of the outer wall of the vessel. If platelets encounter an interruption in the endothelium, they first adhere to the discontinuity; then they “activate,” changing shape as they extend long sticky tentacles; then they aggregate, connecting with each other and causing fibrin to be deposited to form a clot. These changes in the platelets are shown in the following sequence of photos, used with the permission of James N George MD of University of Oklahoma Health Sciences Center:

Why are platelets important?

Blood transfusion is a life-saving procedure for many cases of disease or injury. Today, donated whole blood is processed to extract many different components. By transfusing only the needed substances (red blood cells, platelets, plasma, etc.) each donated liter of blood can help more patients, and the risk of infection and rejection is reduced.

Platelets are not a small business. A “unit” of platelets for transfusion contains between 70 and 600 billion platelets. In 2011, 2.2 million units were transfused at a total cost of over a billion dollars. Various data shows demand for platelets rising at 5% to 8% per year (Michele P Lambert et al; NHS Spring 2012; NHS May 2012).

Why Are Platelets a Problem?

Platelet transfusion is not rare: more than 1.5 million platelet transfusions are performed each year in the U.S. alone. But platelets present more problems than other types of blood treatment:
– There is an increasing demand for platelet transfusion, but the supply of blood is decreasing, due to fewer volunteer blood donors and increasing restrictions on donors to prevent disease transmission.
– Platelets have a very short shelf life of only five days compared with up to a year for blood plasma and some other blood components; this makes it very difficult to manage platelet supply, and leads to waste.
– Platelets must be kept at room temperature to maintain their functionality, but this increases the risk of bacterial contamination.
– As with other types of blood transfusion, there is risk of transmitting an infection, and risk of rejection by the recipient.

If you read the previous blogs on Stem Cells (Part 1 and Part 2) you know that researchers can now reprogram many types of body cells to become pluripotent stem cells, and that stem cells in turn can re-made into many other types of cells. So you might say, let’s just manufacture platelets from stem cells. This would be great because we would no longer be dependent on the shrinking pool of blood donors, and many problems of disease transmission and transfusion rejection might be avoided.

Unfortunately, platelets are not typical cells. A cell usually has a nucleus containing DNA and a fairly well defined shape. However, platelets are irregular fragments of cellular material that contain no nucleus. They don’t form in the “normal” way by differentiation of stem cells, but rather as pieces of very large (50 to 100 micrometer diameter) cells called megakaryocytes (MK), found in the bone marrow. And MK cells are exceedingly rare: only 0.01% of bone marrow cells are of this type.

So there are two critical steps required for efficient manufacture of platelets: first, generating enough MKs (probably from induced pluripotent stem cells); and second, persuading the MKs to break off the right kinds of pieces that will form viable platelets.

In a healthy human body, these processes are pretty efficient: each MK cell produces several thousand platelets, so that in total about 100 billion platelets are produced every day from some 30 million MKs. In laboratory experiments it has been possible to produce the MK cells, but only small numbers, perhaps ten percent of them, go on to make platelets, and this process may take hours to days.

The Promise of Efficient Platelet Production and Commercialization

Since platelets are produced in large quantities by each MK cell in the body but not in a laboratory culture, obviously something has been missing. It’s not a question of chemistry, but seems to depend upon the physical surroundings provided by the body. Researchers have tried changing the stiffness of the culture walls, the oxygen content and the temperature.

A breakthrough came when French researchers led by Claire Dunois-Lardé replicated the shear stress that occurs at the boundaries of the blood vessels due to blood flow. The researchers found that when they provided fluid shear, 30% to 45% of MK cells generated platelets, and within just twenty minutes. Evidently, it’s the physical forces, the “rubbing” of the surface of the MK cells, that causes them to spit off fragments that become platelets.

All this background leads to the newest work: a research group in Boston with lead author Jonathan Thon built a microfluidic “bioreactor,” a microscopic device on a chip that simulates the conditions in the body. There’s a research article and the work is also well described in some news reports (MedCityNews, NutritionReview).

The biochip has two chambers, one mimicking the bone marrow and one mimicking the adjacent blood vessels. Between the chambers is a perforated barrier. MK cells in the bone marrow section extend partially through the barrier, where the blood flow rushing past breaks off pieces of the MK cells that then become platelets. The researchers found that 90 percent, rather than 10 percent, of the MK cells produced useful platelets in the bioreactor. The scientists believe that these very good results give promise of scale-up for commercial production of platelets.

Science Speculation: Within the world of science, research results are documented in formal articles that undergo “peer review” by other scientists before they are published. However, today results are also released to the news media, either by the scientists themselves or by the PR departments of their institutions.

When the journalists come a-calling, they always want to know “How Soon?” And in this case, the researchers have a ready answer. They have founded a company, Platelet BioGenesis, whose website (in 2014) invited “the right partners” and “sophisticated investors” to get a piece of the action. Of the twelve authors on the research publication, two (Thon and Italiano) were listed (in 2017) as co-founders of the company.

A 2017 news release quoted Thon as saying they would “like to commence human clinical trials in 2017.” Later that year it was announced that Dr Thon had resigned his academic position to become CEO of Platelet BioGenesis. Commercialization of medical devices tends to take three to five years, and biotech and pharmaceuticals ten years. Therefore their three-year goal seems to be ambitous. However, we can certainly cheer them on, because affordable manufacture of platelet production would address a critical medical need for millions of people.

Have you ever had a blood transfusion? Have you known someone who has?