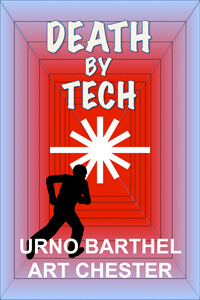 Science Fact: Death By Tech, the second Evan Olsson mystery novel, has just gone to the publisher, Outskirts Press. I hope to have it in paperback and e-book before the end of 2014, and I hope you’ll read and enjoy it!

Authorship of Death By Tech

The Death By Tech cover shows two authors: Urno Barthel and Art Chester. Since Urno is Art’s pen name, you might say: Huh?

I had several reasons to start using the pen name Urno Barthel:
– If you Google Art Chester you have to search the hits pretty carefully to find this Art Chester (although it has been getting easier since I have been writing this blog). There’s the airplane racer, the realtor, various fine art vendors, President Chester A. Arthur… In contrast, Urno Barthel is a unique, easily-searched name. It also happens to be an anagram of my two given names.
– If you are a fan of “cryptic crosswords,” my pen name may be found from the following clues:

– The pen name is intended to emphasize that Halsted Aeronautic Laboratory is not meant to portray any real-life lab associated with the name Art Chester.

So if all that makes sense, how did Art Chester reappear as co-author of Death By Tech?

I wanted to keep Urno Barthel up front for continuity with Death By Probability, as well as for the reasons given above. My friends, finding Urno Barthel to be unnecessarily exotic and foreign, encouraged me to show my real name as author. And in the case of Death By Tech, having Art Chester as an author makes good sense because the book features laser technology, and I was a laser researcher for many years of my professional life.

Hence Death By Tech has as co-authors a fictional Urno Barthel and a (former) laser guru Art Chester.

Summary of Death By Tech

Science Speculation: My readers will have noted unfinished business in Death By Probability: although the mystery is fully solved (as fully as the facts allow), some subplots were begun and not finished.

Death By Tech is primarily the story of a violent crime and the pursuit of its perpetrators. It too is a mystery novel, complete in itself. However, it too continues the parallel plots, especially one involving Evan’s romantic life. The resolution of the dilemmas that result will not occur until a later book in the series.

I intend to publish at least a #3 book in the Evan Olsson series. The published version of #1 was the 50th revision. The #2 book that has gone to the publisher is revision number 30, so I am getting faster and I hope more skilled as a writer. Book #3 is in draft form as revision 8 and will undergo much more rewrite before it is complete.

Will the series continue past #3? That depends upon reader response and upon my visitation by the Muse, both matters of uncertain probability. And as Al might say to Evan, when we don’t know for sure whether something will occur, it is both true and not-true at the same time.

I hope you will read Death By Tech, review it on Amazon.com and recommend it to all your friends who think technology can be fun! I’ll announce the publication date on this blog as soon as it is firm.