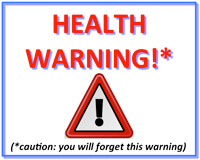 Science Fact: Health warnings are all around us. For example:
– Medicine: Every TV ad for a drug or medical procedure has health warnings with a frightening list of side effects, frequently including death.
– Tobacco: Every cigarette package and advertisement includes health warnings such as cancer, heart disease, emphysema or pregnancy complications. Outside the U.S. the health warnings are stronger and in some cases lurid and graphic.
– Alcohol: Health warnings on alcoholic beverages warn of birth defects and impaired driving.
– Restaurants: Asterisks on many menus are keyed to a footnote giving health warnings against undercooked food.

Many health warnings are mandated by law, either Federal (National in countries other than the U.S.) or State; others are voluntary on the part of the manufacturer or seller, intended for public benefit or to reduce their legal liability.

It’s reasonable to believe that health warnings might discourage consumers from risky behavior that endangers their health. However, studies have shown that health warnings have little or no effect that can be measured: people read them once, then ignore them, and rarely follow the advice given.

But here’s worse news yet: recent work shows surprisingly that health warnings may actually promote the diseases they are intended to protect against!

This surprising result comes from a set of four studies carried out by Yael Steinhart, Ziv Carmon and Yaacov Trope of Tel Aviv University, INSEAD (Singapore) and New York University. The work was reported by Medical Daily and summarized by Berkeley Wellness; however, the original research report is both interesting and readable.

Each participant was shown an advertisement for the product being tested. Half of them saw the ad with a health warning, and half saw the same ad without the warning. Within each of these two sub-groups, half the subjects were tested for their immediate reaction to the ad; the other half tested for their reaction with a time delay, as described below.

The researchers posted their four advertisements online for you to see but because those are no longer online (as of 6/16/2016) I have attached them HERE. Incidentally, the ads actually used had Hebrew texts and were tested in Israel. You might say, OK, but we should replicate the results with U.S. participants to see whether they apply to the U.S. However, I feel confident that the results would be the same in the U.S. and other developed countries, for several reasons:
– Although the researchers are Israelis, they have international affiliations including a U.S. faculty position;
– Israel’s business and technological culture is similar to other developed Western nations due to its residents’ frequent travel, multiple citizenships and close family ties to other developed countries;
– The research results have a plausible theoretical explanation, as explained below, which adds to their credibility for a broader population.

Health Warnings with Past Time Delay

When the women saw the ad and immediately ordered the product, ads with no health warning sold an average of 5.5 packages per participant; when the ad included a health warning, the average person only purchased 0.33 packages. Thus in this case health warnings had an immediate effect in depressing the sale of the product.

However, the participants who did not have a chance to purchase until two weeks later showed a most remarkable result: those who had seen the ad without a warning purchased 0.8 packages, while those who had seen the health warning purchased much more: 2.92 packages. Thus, people are not simply forgetting health warnings: they are remembering them, but in the wrong way!

Similar results were seen with an advertisement for a hair-loss treatment. In that test, the participants were not offered a chance to buy, but simply asked to rate the attractiveness of the product and the trustworthiness of the advertisement. When people saw the ad and immediately asked their reactions, the product with the health warning was seen as less attractive. However after two weeks delay, the product without the health warning was more attractive, and its ad was rated as more trustworthy.

Before we explain what’s going on, let’s look at some even more puzzling results:

When the smokers saw the ad and ordered the product for immediate delivery, ads with no health warning sold an average of 3.0 packs of cigarettes per participant; when the ad included a health warning, the average smoker only purchased 0.75 packs. Once again, health warnings depressed the immediate sale of the product.

Not surprisingly, the researchers have a theory for why health warnings are not only ineffective, but actually have an “ironic” effect: of encouraging the very behavior they are intended to suppress. Yaacov Trope & Nira Liberman use the term Construal Level to describe the selective memory process that we use when we think about something that is not directly in front of us, something that has “psychological distance.”

Here’s a simplified explanation of their theory: Human beings are bombarded with a glut of sensory information and cannot possibly handle all of it. So we have evolved selective memories, in which we classify and store only the most important features of our experience. The more distant the memory is, the more we abstract it and edit it down to just the most important ingredients.

With this additional information Trope and Liberman’s construal theory gives a direct explanation for why health warnings backfire: once you introduce any kind of “distance” – either past or future – our brains forget whatever is less important. And we consider health warnings to be less important than the trustworthiness of ads for the product.

In other words: by including a health warning in the advertisement, the manufacturer makes the ad more believable. This is true even though people realize that sellers include health warnings only because they are required to – this was confirmed in the Steinhart study. As soon as there’s any psychological distance between us and the ad, we remember only the credibility, and not the health warning itself!

Science Speculation: As usual, we want to look beyond this research for practical results that we can make use of.

If the purpose of health warnings is to discourage risky behavior, it seems that governments and regulatory agencies are being naïve in pursuing their goals. Health warnings attached to a TV advertisement for a drug are terrifying when we first hear them. However, by the time we next see our physician, considerable time has usually passed. By then, all we remember about the medicine is its trustworthiness, not the fact that it may kill us!

Health warnings on alcohol are put in fine print on the back of the bottle, out of sight; on tobacco products, they are printed on a package that is kept behind the counter away from children. Either way, the consumer typically does not view the warning at the time of purchase.

Health warnings, if they’re going to be effective at all, need to be given at the point of sale in a way that cannot be easily ignored. If they only occur in advertising, they actually help increase sales of the product at later times.

Protecting Ourselves with Health Warnings

What if we, as individuals, really care that a new drug may pose unacceptable risks of side effects? Or that a tasty packaged food product may contain several times our recommended daily intake of salt?

We need to protect ourselves by realizing that our brain plays tricks on our memory. If we want to defend ourselves from bad outcomes, we need to refresh our data at the time we make the purchase decision.

We can help ourselves tremendously if we:
– Ask the doctor or nurse to review the risks and side effects of a course of treatment once more for us, at the moment we are deciding whether to go forward with it;
– Read the health warnings and nutrition information whenever we choose a product that is new for us, and make sure to read that information at the time we are taking it off the shelf and putting it in our shopping cart;
– Read the fine print, in restaurant menus and wherever else we see it, because that’s where the “health warnings” of that cell phone contract or insurance policy are likely to be given – for some of us, this means keeping our reading glasses close at hand;
– When we see a TV ad for a medicine with horrifying side effects, at that moment we need to voice to ourselves and to our immediate companions: what I really want to remember most of all about this medicine is that it is much too dangerous for me to consider taking!

Do health warnings affect your behavior? Or do they simply get lost in the noise of life’s affairs?