Science Fact: Animals adapt – animals as different as walruses and birds change their behavior dramatically in response to changes in food supply, predators, habitat and of course climate.

Once in a while, the change is so dramatic, and so photogenic, that we can’t miss it. Which is why you might have seen this amazing NOAA photo by Corey Accardo showing 35,000 walruses crammed onto a beach: 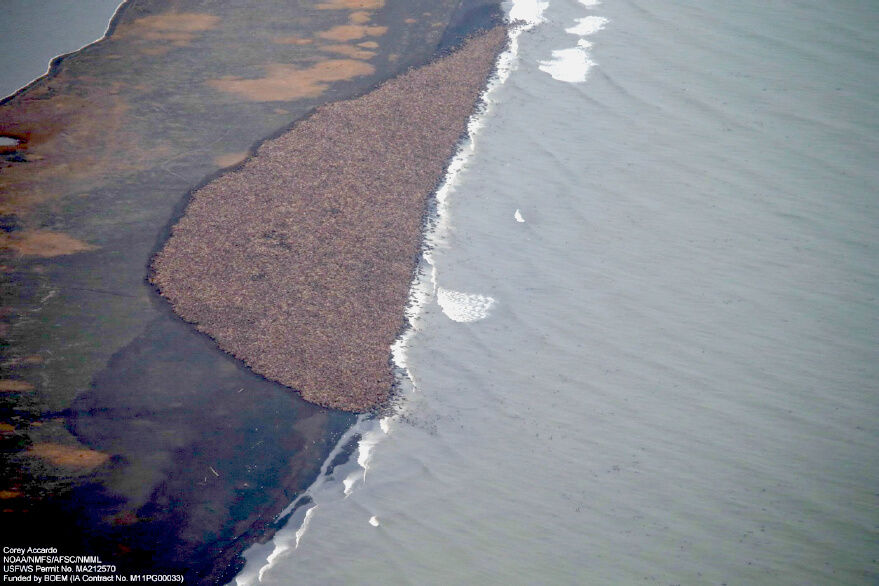 The beach is near the Inuit village of Point Lay, Alaska on the north-northwestern edge of the state. There are so many walruses that we can’t make out individuals in the photo. With average weight over 2,000 pounds, that beach is supporting some 70 million pounds of blubber. The photo at the top of this blog, taken by Ryan Kingsbery of USGS, shows a close-up portrait of a typical female. Six additional great photos appear in an article by the Alaska Dispatch News.

This gathering of walruses, known as a “haul-out,” is normal behavior for an animal that cannot swim continually but must occasionally rest. However, walruses prefer to haul out on floating ice, safely away from predators. What’s new is that since about 2007 there has been a severe shortage of sea ice. Animals adapt, and almost every year since 2007 walruses have been resting on beaches in northwest Alaska.

This change in behavior comes at a price. The animals eat sea snails, clams and worms that live on the continental shelf. But the beaches are more than a hundred miles from the best feeding grounds. In addition, a polar bear, human hunter or low-flying plane may cause the walruses to stampede. As they hurry into the water, juveniles and smaller individuals can be trampled to death.

The story about the walruses brought forth a variety of responses:
– The FAA issued regulations to keep planes and helicopters at a safe distance to avoid triggering a stampede.
– News stories linked the walrus gathering to global climate change.
– Some journalists apparently interviewed the walruses to determine their state of mind: the Daily Mail headline reads “35,000 walrus frantically come ashore.”
– The National Review, calling it a “walrus beach party,” sniffed that mass haul-outs have been seen at least since the 1970s and that despite the decrease in sea ice, there are twice as many walruses in the wild as there were in the 1950s.

So walruses are an example of the ways that animals adapt to changes in the environment. The balance between walruses and polar bears may shift a bit, but the walrus doesn’t seem to be in danger of imminent extinction.

Of course, many animals adapt besides walruses. We have previously mentioned the disagreements about climate change: how much is natural and how much is caused by man. What everyone is agreed on, however, is that on average we are experiencing a warming trend. Spring is arriving earlier than it used to; and North American birds have been wintering a little bit further north every year for the past fifty years.

When the environment changes and animals adapt, there are losers but there are also winners. In a 2014 online posting, the World Wildlife Fund summarized the situation this way:

One of the winners in this lottery is the long-tailed tit, an attractive tiny bird found throughout Europe and Asia: 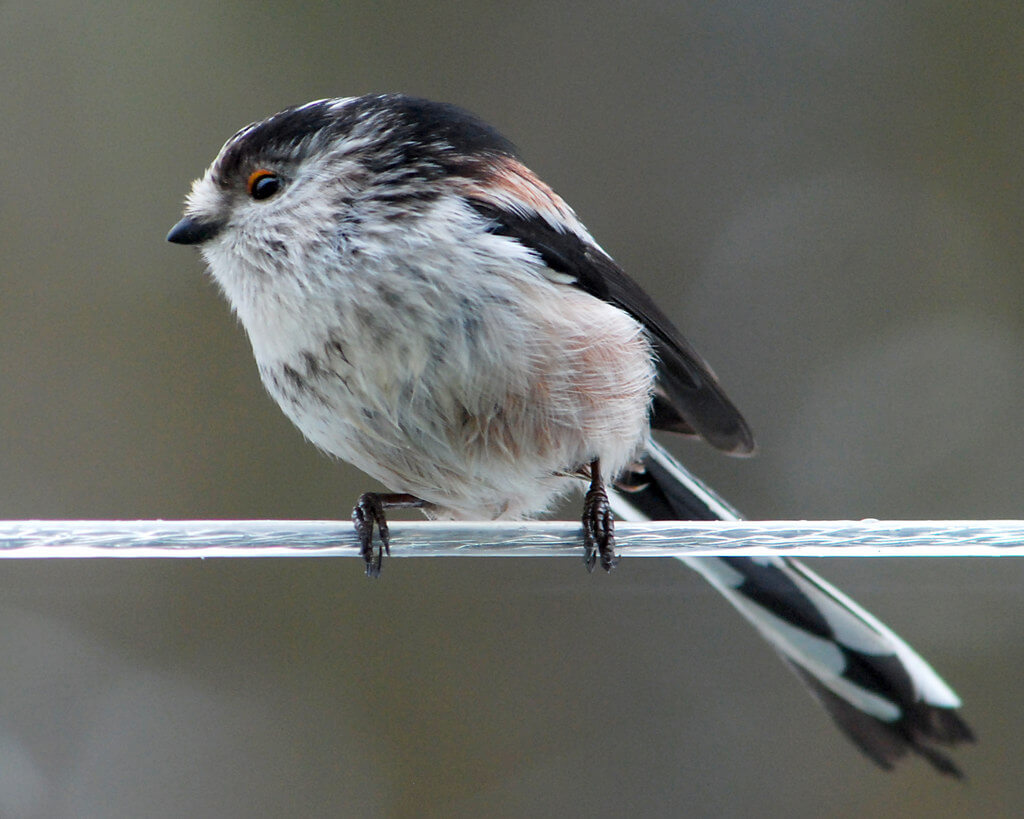 A research study in UK concludes that climate warming is very good for this bird, because a warmer and dryer spring makes it easier for birds to raise chicks without so exhausting themselves that they can’t survive the next winter.

Just as sea mammals and birds shift their range of habitat, so do plants. If the climate is warming, it’s not surprising that the kinds of plants you find in a given area will change over time. 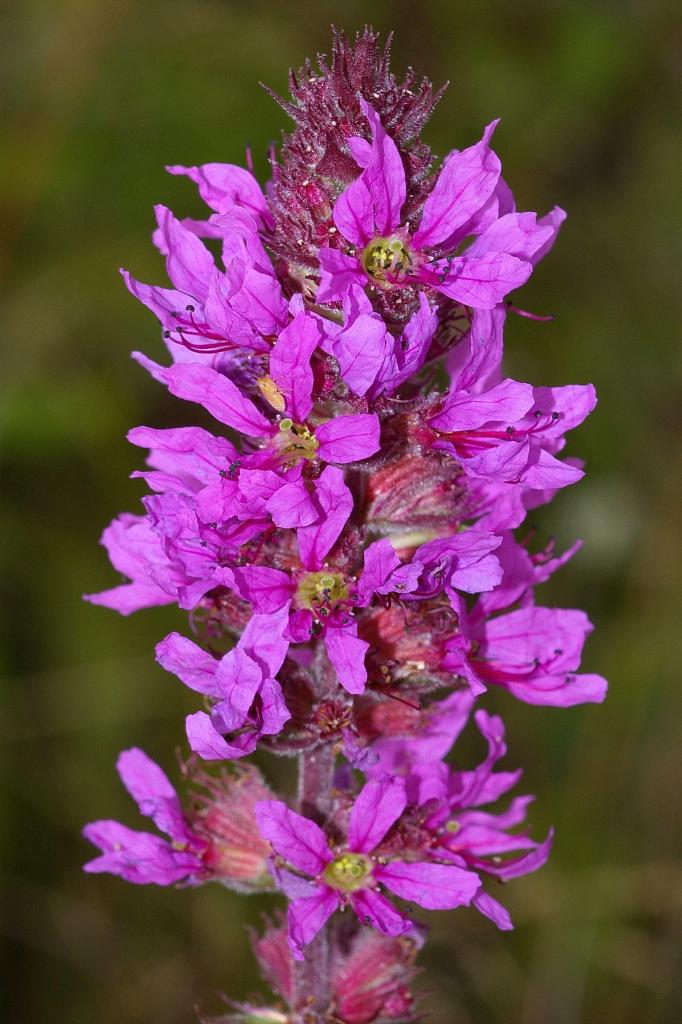 A recent study looked at the purple loosestrife, an attractive wild flowering plant shown above. It’s classed as an “invasive species,” which is usually used as a pejorative term but in this case simply means a plant that has a better-than-average ability to adapt to change. The change that has been most beneficial to the purple loosestrife is earlier flowering in the warmer weather, allowing it to increase its reproductive capacity tenfold and outcompete other plants.

What do I say to that? I will channel John Lennon and sing “I am the Walrus – goo goo g’ joob!”

In other words I’m saying, relax, don’t panic! We are told that 99.9% of all species that ever lived have become extinct. Although we naturally mourn threats to wildlife (especially big animals that photograph well), we need to remember that animals adapt, and understand the situation in a larger context.

Big change is a risky path to pursue. If people were to suddenly stop burning coal, for example, it might make the air cleaner, at the price of causing millions of people to freeze to death in the winter. Human beings don’t yet have the wisdom to engineer their environment in a sensible way. Even plausible-sounding actions have unintended consequences. As an example, European rabbits were brought to Australia to be bred for food, then released into the wild in 1859. They soon overran the continent, devastating plant species and causing severe erosion of cropland.

It may be our inability to agree on things that will save us as a species. Experiments are going on all the time in different parts of the world, testing approaches to conservation, renewable energy, climate adaptation, water purification. We’re awfully good at copying what works, so unless we inadvertently pollute the entire earth (not an impossible task), we have a good chance to survive.

We may someday live in a world with fewer walruses, just as there are fewer woolly mammoths and sabretooth tigers than there once were; however, there will be purple loosestrife and long-tailed tits, and who knows what other wonders to enjoy. And who can say whether that is a bad thing?

Related articles (Updated 2017): Some useful sources on climate change are the 2014 report by IPCC (Intergovernmental Panel on Climate Change) and additional links given by EPA and IPCC.