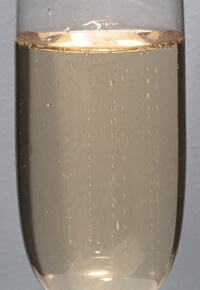 Bubble science is not a field as such, but a shorthand way to say, I will discuss the bubbles in sparkling wines from a science perspective. This will not be a PhD course in second fermentation, riddling and disgorgement; nor will my blog be broad enough to encompass, say, the Gazillion Bubble Show. Practical understanding is today’s theme. I promise not to quench your desire to enjoy wine!

Bubble Science 1: What is Champagne?

Before we launch into bubble science, let’s dispose of a thorny question: the term Champagne. The French are quick to take offense when a sparkling wine not from the Champagne district bears the designation “Champagne.” The European Union and most other countries restrict the term Champagne in this manner. Even the terms méthode champenoise and Champagne method to describe the production process have been forbidden by EU courts since 1994. Only the term “traditional method” (méthode traditionnelle) may legally be used.

Those who aspire to show their knowledge of wines scrupulously avoid the term Champagne for any non-Champagne sparkler. They bend over backwards to avoid a term that is immediately recognizable in popular speech, for fear of being labeled yahoos.

The U.S. Is Not France

However, in the United States Champagne is a “semi-generic” designation, legally recognized by U.S. law and by the United States Alcohol and Tobacco Tax and Trade Bureau. Sparkling wines may use the term so long as the label clearly reveals the domestic origin of the wine. Nevertheless, bowing to pressure from many sources, most U.S. sparkling wine producers have excised the word Champagne from their vocabularies entirely.

There are, however, a few exceptions, among them Korbel. Korbel has been unapologetically selling California champagne (note the lower case “c”) since 1882, and they even state that they employ the méthode champenoise. The Korbel winery’s longevity in fact pre-dates the Madrid System of trademark designations, which was established by treaty in 1891. Thus if any winery has the right to buck the trend and call its product California champagne, Korbel should qualify.

Bubble Science 2: Where Do the Bubbles Come From?

The source of the bubbles in beverages depends on the beverage.

To produce an alcoholic beverage you first dissolve a carbohydrate (a starch or sugar) in water. In the case of wine, the carbohydrate is usually grape juice. For beer or ale, barley or wheat. And for hard liquor, potatoes, grain, sugarcane or just about anything you can imagine.

We’re talking about wine, so let’s think in terms of sugar that comes from grapes. Yeasts grow naturally on the skins of grapes, so the grape juice contains yeast cells as well as sugar. If you don’t refrigerate the grape juice, just let it sit out, the yeast acts as a catalyst, helping the sugar undergo a chemical reaction:

The ethanol is the alcohol that is modern society’s most popular and acceptable happiness drug. The carbon dioxide is a “by-product” – something that you didn’t necessarily want, but that comes as a bonus.

In the case of beer and ale, fermentation occurs in a tank where pressure can build up. Much of the carbon dioxide stays dissolved in the liquid as carbonation. Quaffers consider bubbles to be a desirable feature of these drinks.

Bubbles Were Once Dangerous

A few hundred years ago most winemakers abhorred bubbles, because if too much pressure built up, the glass bottles would burst. It was only the advent of stronger glassware and the invention of the muselet (wire cage) to confine the cork that allowed bubbly wine to become not only an acceptable variation, but often a desired one. And bubbles offer an extra benefit: wine folks assert that the aroma molecules attach themselves to the forming bubbles, which deliver them to the surface and to your awaiting nose. Thus the bubbles help you enjoy wine all the more.

Non-alcoholic sodas (soft drinks) also contain bubbles. However, the manufacturers don’t want fermentation and the resulting alcohol. Therefore, there is no natural source of carbonation in the manufacturing process. As a result, soft drinks rely on carbon dioxide gas injected under pressure to get their effervescence.

Bubble Science 3: How Fast Do the Bubbles Come Out?

The bubbles in champagne are dissolved in the wine. Bubble science tells us that they are not in a hurry to come out. Microscopic bubbles form within the wine, but when surrounded by wine they tend to grow slowly if at all. Thus a champagne glass of infinite size (try imagining that!) will not look very bubbly at all.

Everything changes when you introduce an irregularity. What kind of irregularity am I talking about?
– If you pour champagne too rapidly, you generate turbulence, eddies in the wine right down to the microscopic level. The same thing happens when you shake up a soft drink before opening it. These eddies are “rough places” where micro-bubbles encounter pockets of air that help them grow rapidly. 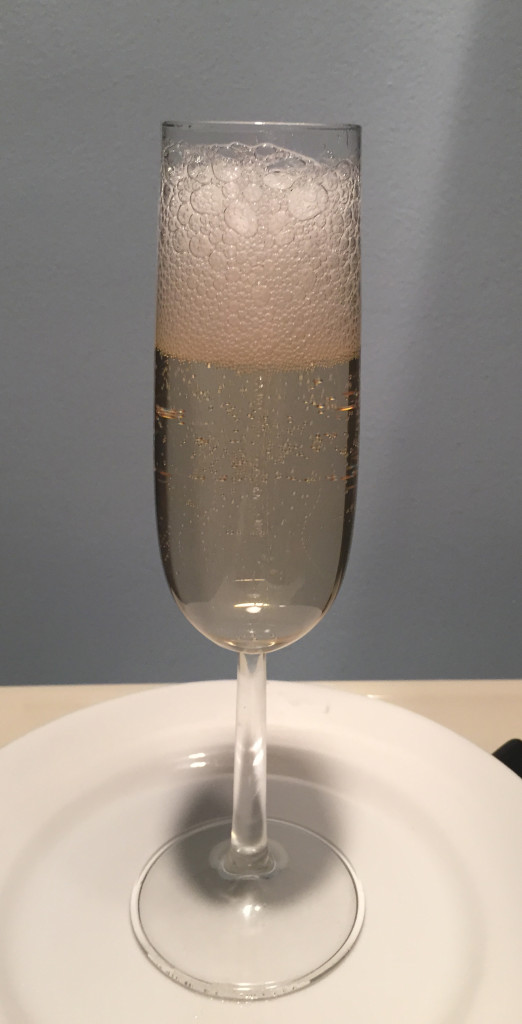 What a waste of good bubbles!

– Even the boundary, that is, the internal surface of the glass, is another type of irregularity.
– Try, if you dare, dropping an ice cube into champagne. This also works with beer.
– Even sticking your finger (your oily, germy, irregular finger) into a flute of bubbly will cause bubbles to form on the intruding appendage.
– In practice, bits of dust within the glass help bubbles form; if you polish the glass with a cloth, the dust particles are replaced by pieces of clean lint that serve the same function of giving the bubbles a place to nucleate.
– You know of course about the Diet Coke and Mentos Eruption; the many small holes on the surface of the mints create not a few, but staggeringly many irregular spots for bubbles to form.

What Explains the Bubbles

What’s going on? The bubble science part of the story is simple physics, or maybe chemistry (I am sometimes fuzzy about where the boundary lies). There is much more CO2 in solution than the wine can stably hold at normal atmospheric pressure. Once you open the bottle and relieve the pressure, you have a “super-saturated” solution, in which the gas is trying, trying to escape its prison between the water molecules.

Differently stated, the carbonated wine contains more energy. If it can release all its gas it will be in a lower and more stable energy state. However, it can’t just fall to the lower energy condition. There is an energy barrier that the gas molecules must jump over, and it’s hard for them to get to that happier, more restful state. When the wine encounters a “discontinuity,” the edges of that irregularity have higher electric fields, which distort the fields that trap the CO2 molecules within the wine, making it easier for them to escape.

Bubbles and no-bubbles are the extreme cases. There are some who enjoy the tingle of carbonation on the taste buds. I am one of them, Nola is not: chacun à son goût. What are bubble lovers to do?

I will tell you my experience at Korbel Champagne Cellars and then offer my opinion.

Bubble Science 4: To Etch or Not to Etch?

In the process of sampling sparkling wines at Kobel, I of course compared their carbonation. I was not surprised to see the Natural style champagne showing tiny bubbles, slowly forming and rising throughout the volume of the flute. However, I also tried two other wines, the Non-Vintage Blanc de Noirs and the Master’s Reserve Blanc de Noirs. And these two wines showed a completely different pattern of carbonation: larger, more numerous bubbles, rising in a swirling spiral column confined to the central axis of the glass.

Upon discussion with my server-host-salesman-winetender I learned that most of Korbel’s tasting flutes have a small circular pattern laser-etched into the lowest spot inside the glass. Looking into an empty glass I saw a frosted spot that was a stark contrast to the clear glass. The flute of Natural poured for me was a flute that for some reason had escaped the etch process – it was perfectly smooth inside.

It’s All In the Glassware

As noted, my first glass had a smooth surface inside. Microscopic irregularities of some kind within the glass formed “nucleation sites” that acted as a catalyst to let the bubbles form, all over the inside of the flute. The etched glasses, with their many laser-created rough places, created faster, larger bubbles, rising only from the central etched point. 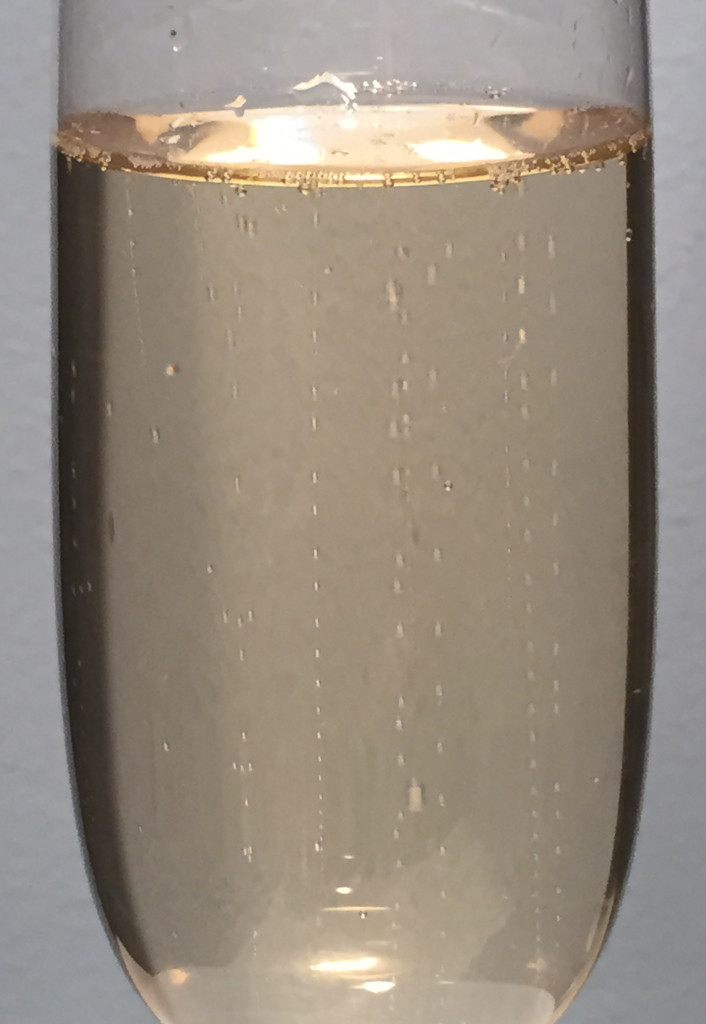 Tiny bubbles, throughout the wine

To me, the tiny bubbles are more beautiful, and they don’t let the wine go flat so quickly. And after all, could Don Ho be mistaken? So why would Korbel intentionally etch their tasting glasses?

Here’s my bubble science analysis: if the winery doesn’t etch its glasses, any tiny difference in the cleanliness of the glassware will cause the champagne in one glass to have more bubbles, and larger bubbles, than another glass. This will confuse visitors trying to compare wines, and may even cause the visitors to believe that Korbel’s wines are inconsistent from one glassful to another.

What if the server tries to explain the bubble science to them? That would be a disaster: telling a visitor that one glass is cleaner than another will make potential customers spit out their wines and hurry away from these unclean and germ-ridden vessels. Ergo, the winery’s solution is to force all the wines to bubble the same way. They employ an etched area whose effect is so dominant, that tiny differences in glass cleanliness or smoothness will be imperceptible.

The internally-etched glasses are not unique to Korbel: you can buy flutes like this. The advertising, however, goes too far, implying that your champagne will bubble “forever” in such glasses. Bubble science begs to disagree: eventually the wine will so to speak, run out of gas.

Helen Czerski asserts that “posh glasses” provide an etched area in the center of the glass. That statement surprises me: I find no mention of internal etching in the extensive Williams-Sonoma offering of bubbly glasses, not even in their pricey Sommeliers Sparkling glass from Riedel. Erika Szymanski is more circumspect. She allows that some glasses are so etched, but cautions that your bubbly will go flat that much sooner.

Should we buy flutes for the home with an etched spot inside? I say no, please no. Continually frothing bubbles from a central point look artificial and dopey. It’s as if there’s a bubble machine mounted on axis, pumping air through the center, with no regard to the wine in the rest of the glass.

Instead, let’s clean the glasses to a high but not superhuman standard. If the glasses are spotless, polished with a pristine cloth, we find that the bubbles are subtle and ubiquitous. They form throughout the volume of the glass, and linger to lend their aroma and taste throughout your glassful.

Does Bubble Science offer a boost to your Champagne enjoyment? Or does thinking too closely about the quaff spoil your experience?