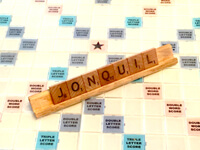 Scrabble is not one game, but a family of games. Like wine tasting, fantasy football and curio collecting, it can be pursued casually or obsessively. And once you give yourself permission to make it “yours” the possibilities mushroom.

Scrabble is said to be the world’s most popular word game, with Scrabble boards happily resident in one-third of U.S. homes. But how often is it actually played? Perhaps Scrabble needs improvement to become more entertaining among friends.

The rest of this post talks about what’s “wrong” with Scrabble as entertainment, and how to fix it. If you’re only interested in the “friendly” rules that make Scrabble a lot of fun, skip down to the last part of this article.

If you’re a person who has not been already infected by it, Scrabble is played on a board of fifteen by fifteen squares. There are one hundred almost-square game pieces (“tiles”), each marked with a letter and a point score. Each player has a rack and fills it with seven tiles; these are used to make words, which always have to attach to words already on the board.

The obsessive side of Scrabble has been entertainingly documented in the book Word Freak, whose subtitle well describes its contents: Heartbreak, Triumph, Genius, and Obsession in the World of Competitive SCRABBLE Players. I don’t mean to denigrate the many players who devote themselves to tournament-level Scrabble – on the contrary, I highly respect what they achieve:
– They perform prodigious feats of memory, pattern matching, strategic thinking and opponent assessment;
– They are members of a social fraternity, some would say almost a cult, giving them an instant bond with a far-flung world of like-minded folks;
– They can enjoy the adrenalin rush of victory and the suicidal depression of defeat while maintaining (if they wish) a couch-potato sedentary lifestyle.

In our New Year celebratory blog Brut Rosé Tasting, I re-cast what is often considered to be a serious or snooty activity as an entertainment among friends. We live in a time that is relatively unconstrained by tradition and rules-from-on-high. Therefore, we are free to choose our own goals for leisure time activities.

Here’s a possible set of goals for Scrabble and similar word games:
– To have fun
– (Possibly) to learn new things

For me, the principal drawback of tournament Scrabble is that words are used as abstract tokens – they don’t “mean” anything. As a writer, I treasure the written word, not for its shape or size but for what it conveys. To prepare for tournament Scrabble one must learn and memorize many words with no consideration of what they mean. It’s useful to know that REDAMAGE is a word but REBREAK is not, and it’s really helpful to know that QAT is a word. However, for a tournament player there’s no payoff to knowing that QAT is an evergreen shrub.

I on the other hand find it interesting to encounter new words, and to know a little bit about what they mean. I would prefer to know that DEV or DEVA is a Hindu god, and wonder about its relationship to DIVA (“a distinguished female operatic singer”), rather than simply use the words because they give me points.

Alice asked “What is the use of a book without pictures or conversations?” I would analogously say “What is the use of words that have no meaning?” Thus I have little interest in the various versions of the Official Scrabble Word List. I would rather use the Official Scrabble Players Dictionary (OSPD) for reference, since it includes brief definitions of the words. I prefer OSPD even though it has been bowdlerized by the omission of…well, you can imagine what words – words that would have caused your grandmother to blush, back before she got online and started reading racy blogs.

The official Scrabble rules do not permit consulting the word list or dictionary except during a challenge. Therefore, when we derive rules for “friendly” Scrabble, that’s one thing that needs to change.

Scrabble is not fun for everyone. However, if you have a reasonable vocabulary and enjoy looking for patterns in mixed-up things, Scrabble is a good game. There are even Junior versions for children.

The letters you draw are subject to random chance, so it’s possible for anyone to get lucky and beat a stronger opponent. However, the game is more fun when the players are approximately evenly matched, or are made so by an appropriate handicap.

Nevertheless, even for those who love this kind of game, Scrabble can be disheartening or boring.

The same randomness that makes the game unpredictable can also make it dispiriting. Every so often you will draw a rack with all vowels, or all consonants. This dooms you to one of two distasteful paths:
– To forfeit your turn by exchanging all or some of your tiles – whereupon you may wind up with an equally undesirable rack!
– Or, to gradually get rid of your worst letters during the next few turns, making plays to improve your rack rather than gain points.

Either way, your opponent surges ahead while you are mired in the swamp of circumstance.

It’s almost as frustrating to wind up with multiple letters. A rack with three “I”s or three “U”s is also quite discouraging. After all, even if Fortune strikes and you have the letters to make INITIAL or UNUSUAL, you may not have any place to play it on the game board!

Fortunately, the worst of these frustrations can be fixed with appropriate rules, as we will discuss below.

The standard Scrabble set of one hundred tiles includes two blanks that can be designated as any desired letter. The blanks are tremendously valuable: when you happen to draw a blank during a game, the possibilities of your rack open up immensely. And if you should draw both blanks during the game, you have a great advantage over your unlucky opponent.

However, once the blanks have been played, the normal Scrabble game becomes less interesting, perhaps even boring, because you don’t have that frisson of excitement every time you draw a tile, hoping that it will be your blank-tile ticket to the stars.

Here again, a change in the rules can allow the blanks to circulate and be re-used again and again. The pace picks up, the possibilities open up, and the game becomes altogether more interesting. In my personal opinion, of course.

In 2005 I encountered a website by Richard Pavlicek that has a great deal of information about the game of bridge. At that time (though not today) it also contained a set of rules for friendly Scrabble. In case you’re interested, with his permission I herewith attach Richard’s Scrabble Rules to this blog.

Nola and I have chosen to play with a slightly different set of rules, presented here as Rules for Friendly Scrabble. We borrowed some of Richard’s Rules and added the common variation in which blanks once played may be substituted and played again. (Some folks allow players to re-designate already-played blanks when building on existing words – we don’t permit that because, well, everyone has his limits!)

For those who hate to open links, here are the essentials of our Friendly Rules:
– If you possess the letter that matches an already-played blank, you may swap it for the blank, provided that you then re-play the blank during the same move;
– You may freely exchange tiles to eliminate two pair, three of a kind, fewer than two vowels, or fewer than two consonants;
– You may occasionally consult the dictionary.

In addition to these rules, we have a set of useful word lists that players may review at any time. These lists help make Scrabble less of a memory task and more of a pastime. After all, when you’re trying to play a Q or a J it’s really handy to see a list of words that contain those letters.

Does your home possess a Scrabble set? Does it get regular use? Does it receive any use?

Credits:
Scrabble is a trademark of Hasbro, Inc. in the U.S. and Canada, and of Mattel in the rest of the world
Richard’s Scrabble Rules are presented with permission of Richard Pavlicek