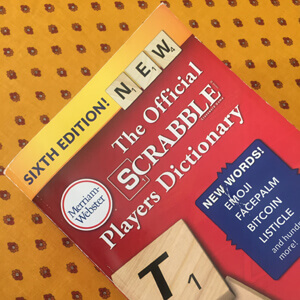 This post on Scrabble 2018 presents 10 word lists based on the newly published 6th Edition of The Official Scrabble Players Dictionary (I’ve corrected this version of List 8 per a 2019 blog post.)

I published two later articles in 2015, updating the word lists. I have now deleted those posts and pointed their addresses to this article instead.

The following lists are based on the Scrabble 2018 6th Edition of The Official Scrabble Players Dictionary.

My research may not be perfect! If you see errors, please send me a note at Art@ArtChester.net or through the Contact page of this website. Also, contact me if you prefer to format any list differently. I can send you a Microsoft Office version.

List 1: Useful Words appears in the Scrabble 2018 dictionary. Nevertheless, I include it here so you’ll have a complete set of lists in similar formats. List 1 contains:

The Scrabble 2018 dictionary presents a single list of two- to six-letter words containing the high-scoring letters J, Q, X and Z. However, I consider the dictionary’s format to be inconvenient. After all, if you have a “Z” in your tile rack, you don’t want to waste your time looking at a lot of J-Q-X words!

Therefore, I have subdivided their single list into the four following lists:

List 7: 2 To Make 3 gives all the two-letter “hangs.” That is, this list shows all the single letters that can be added before or after a two-letter word to create a valid three-letter word. This list is intended to be 100% consistent with List 6.

Corrected 7/31/19 per 2019 blog post: List 8: 3 To Make 4 is a new update of a very old list of three-letter “hangs.” It tells all the single letters that can be added before or after a three-letter word to make a valid four-letter word.

Each entry follows the same format as List 7. That is, the entry “fpt ACT as” means that you can add to the word ACT to make the words FACT, PACT, TACT, ACTA and ACTS.

List 9: Words with CC,HH,II,KK,UU,VV,WW,YY helps you unload multiples of difficult letters, such as two “C”s. It lists all the 3- to 6-letter words with doubles of each indicated letter.

In addition, this list contains all the 7- and 8-letter words containing UOUS. These 14 words are the same in the 6th Edition dictionary as they were in the 5th Edition.

List 10: Words with Many Vowels is the Scrabble 2018 update of a list once offered by Hasbro. It lists all the words with four or more letters of which more than 66% are AEIOU. Also, it includes the two and three letter words that consist only of AEIOU vowels.

The vowel words up through 8 letters are taken from the Scrabble 2018 6th Edition dictionary. However, that dictionary does not include longer words unless they are directly derived from the shorter words. Therefore, the 9- through 12-letter words in this list are taken instead from the Scrabble U.S. Tournament word list known as TWL06.

Changes in the Scrabble 2018 Dictionary

News media reported that the 6th Edition dictionary added 300 new words compared with the 2015 5th Edition. By surveying news articles, I found a total of 30 new words revealed, including such goodies as BESTIE, BITCOIN, BIZJET, EMOJI, FROWNY and TWERK.

Apparently, Merriam-Webster did not allow news media to list all of the new words, for fear that people would not buy the new dictionary. Consequently, I have not found a complete list online. However, I can share with you a few nuggets:

For more discoveries, I encourage you to buy and browse the full dictionary!

Nola and I continue to enjoy Friendly Scrabble as a game. As mentioned in the Scrabble 2 blog, we favor the double-sized game Super Scrabble for home and travel.

If we have dead time in a doctor’s waiting room or at an airport, our iPhones offer many diversions. However, they also offer Pass-and-Play (standard-sized) Scrabble and the similar game Words With Friends. We can put these games aside in mid-play and resume them during our next dead time.

Does your home have a Scrabble game set? Is it ever used? Don’t miss out on the fun!