California champagne country is today’s topic, specifically the Sonoma Valley, one of the principal wine-producing areas. And yes, I call it champagne on purpose, for reasons discussed before.

The previous two blogs covered Bubble Science and Champagne Tasting Rooms. Differently stated, we started all the way inside your California champagne flute, talking about the wine itself. Then we moved outside the glass, but still indoors at the winery tasting room. Today, we go outdoors altogether for a sort of travelogue through the byroads of Sonoma California champagne country. I will try to squeeze in a smidgen of science, at least of the scientific (i.e. logical) method.

Nola and I own a condo in Maui which we visit for a few weeks every winter, and rent out to vacationers the rest of the year. The condo association board held a meeting in Sebastopol, smack in the heart of California wine country. As a board member I needed to attend in person. Nola stayed home and had the option to phone into the meeting. I was able to carve out three hours to enjoy wine at champagne makers in the Sonoma area.

A Plan for the Tour

I previously described how I systematically winnowed through wineries and chose three for my adventure. Unlimbering my ever-reliable Scientific Approach, I Google Mapped the destinations. I added a necessary visit to In-N-Out Burger. And I plotted a minimum-distance path to visit all three Sonoma Champagne specialists. (For those of you who are mathematically inclined, this planning process solves the Traveling Salesman Problem.)

For deprived individuals who live far from California, I should explain. The In-N-Out burger chain is addictively loved by residents from California to Dallas. Moreover, it is obsessively longed for by deprived citizens living further east (e.g., Michigan).

In-N-Out has been hand-making its burgers and fries with healthful ingredients for 67 years. I consumed a Double-Double cheeseburger and a vanilla shake for lunch. Fries were not on my agenda because potatoes are, after all, a prominent and continual member of the Dirty Dozen list. (See the discussion of Organic Food in Coffee, Booze & Other Health Food.)

In-N-Out claims to have offered the first drive-in burger establishment. Accordingly, they have been commemorating culinary milestones with a distinctive T shirt, almost every year. I acquired a range of sizes of the brand new 2015 T shirt, for family members. (The recipients would probably have preferred that I put a bag of burgers into my luggage for them.) 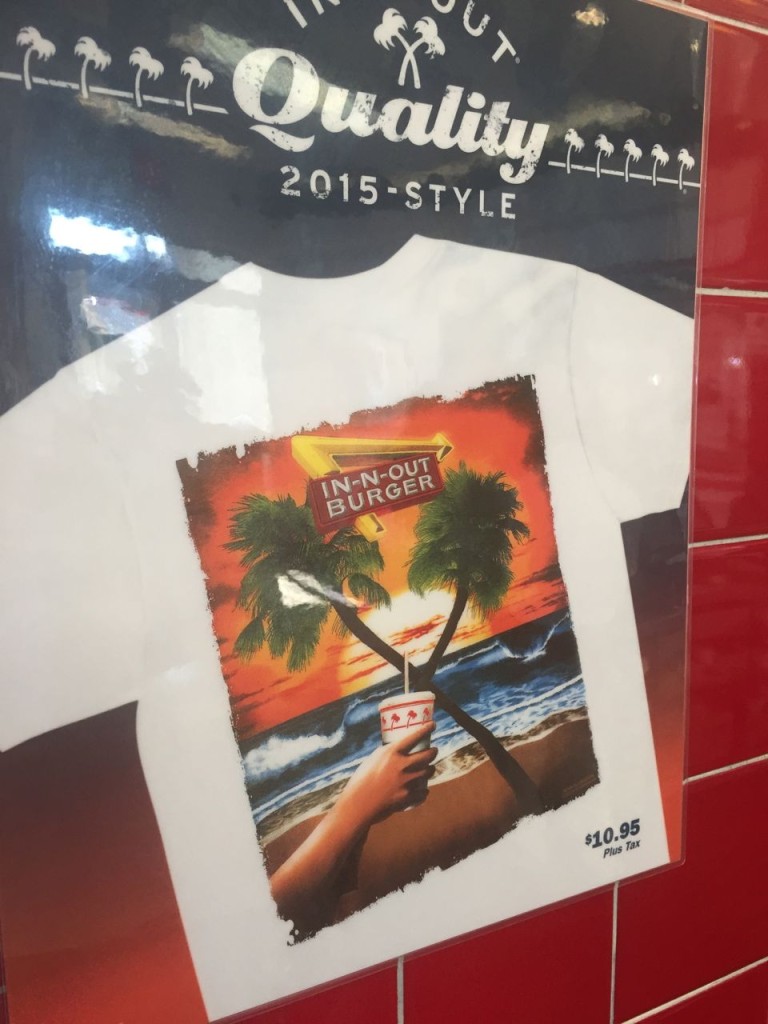 Following lunch, Google Maps led me on a zig zag path through beautiful countryside. I saw fields of trellised grape vines and quiet roads hugged by shade-giving trees. In addition, there were small towns that were no more than a junction with a few stores. 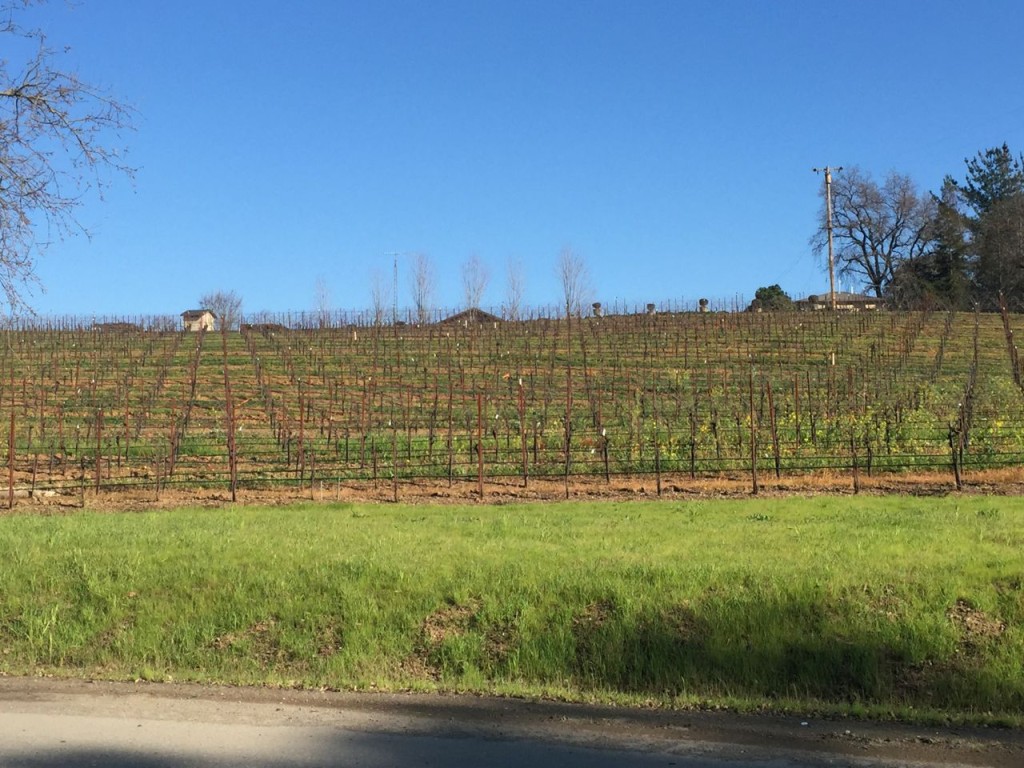 There was no mistaking the J winery. Next to the highway, their elegant “J” logo presented itself as a giant gold letter. 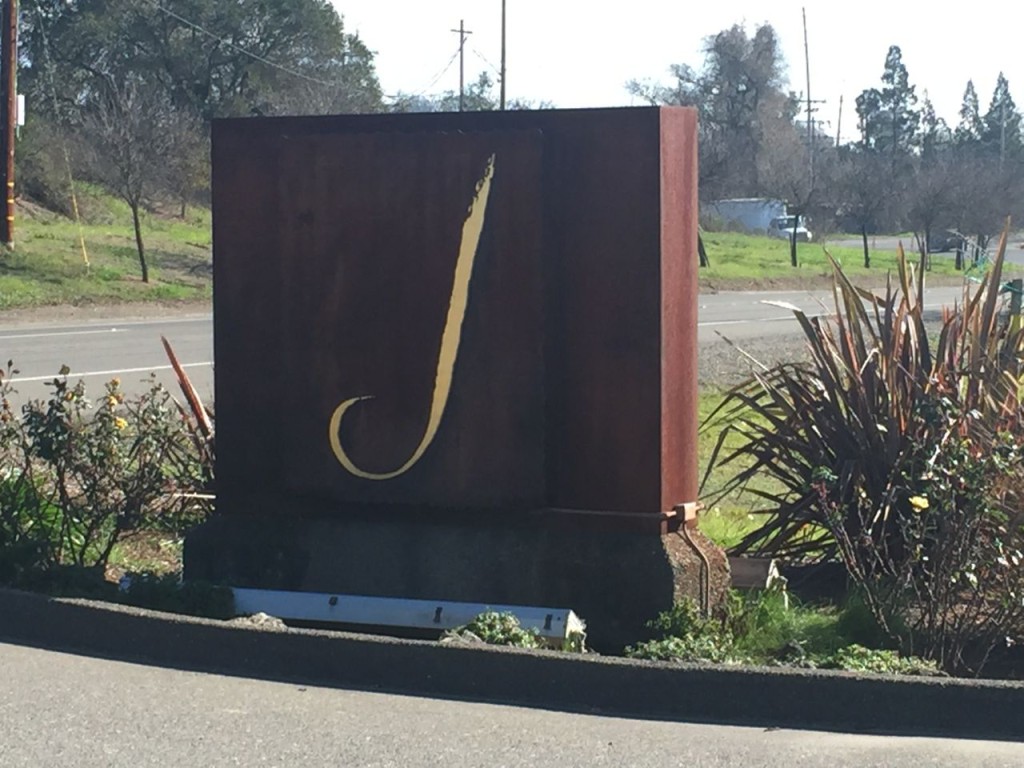 Up the driveway I parked and approached their buildings. The pathway was hugged on both sides by large lily-covered ponds. The water features looked rather like a moat protecting the winery from folks like me. 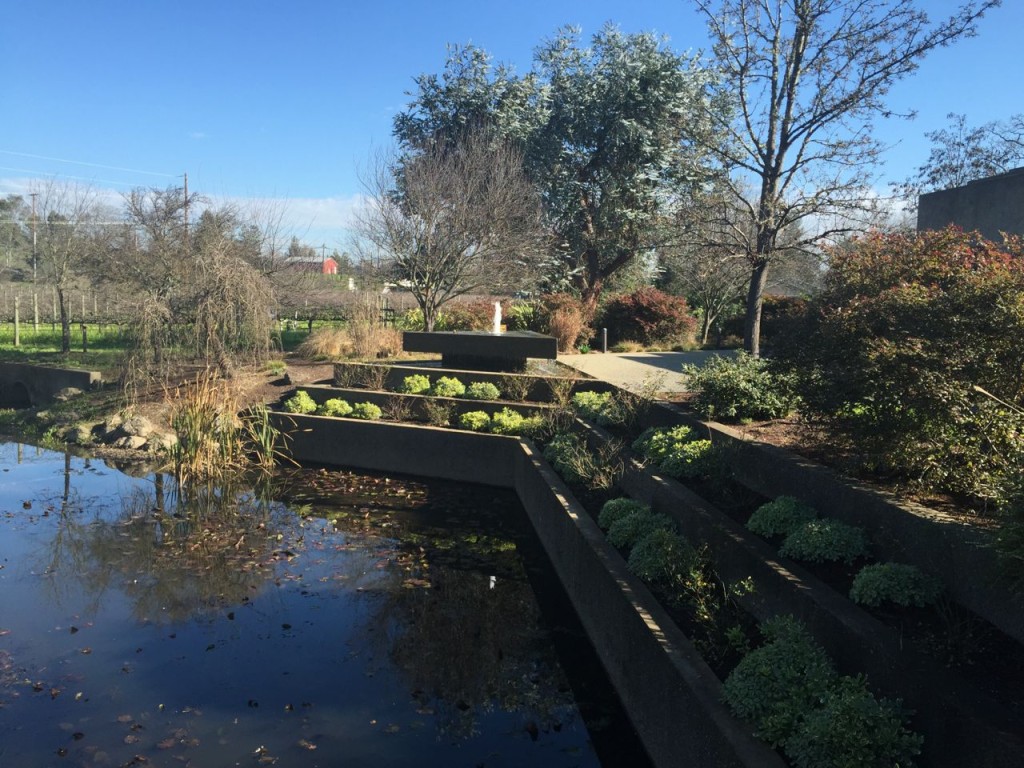 I have previously described my experience at J Vineyards. Suffice it to say that the interior atmosphere was consistent with the exterior landscaping plan.

My travel plan next took me to Guerneville. And once again there was no direct route, but a scenic back-and-forth path. There were vineyards of course, often handsomely marching up the hillside next to the road. 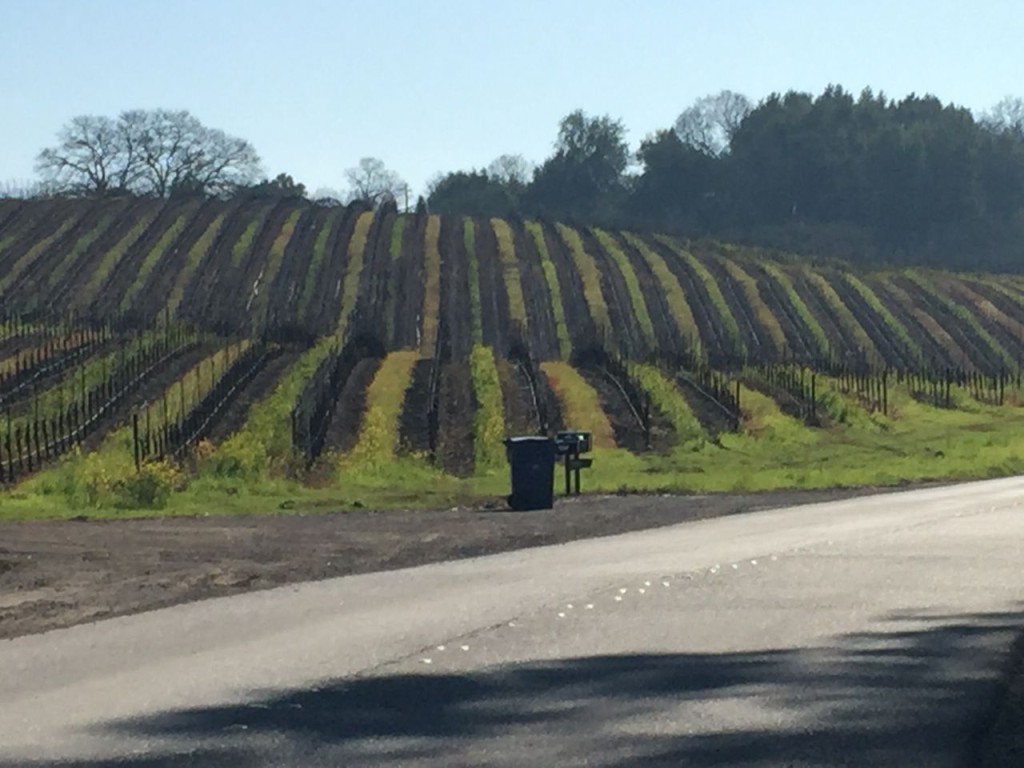 Sonoma wine country is not a boring and continuing vista of grape vines. In fact, the Sonoma area was first and famously known for its extensive orchards of Gravenstein apples. Many long-term residents vigorously promote “agricultural diversity” in the Sonoma area through events such as the Gravenstein Apple Fair. Agricultural diversity in this case means, please, new property owners, don’t cut down the lovely apple trees and plant more of those disgusting grape vines!

So there’s more to see than simply grapes, sitting in the sun, growing. When you are not enjoying other vistas, you will cruise through green tunnels of arching trees. 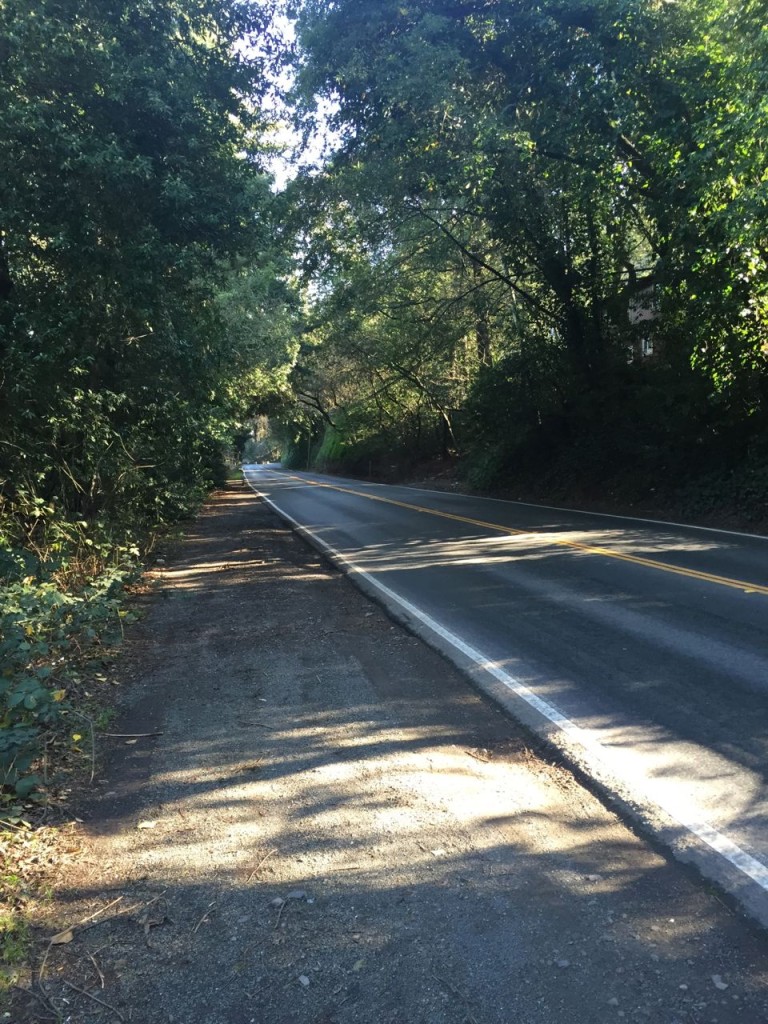 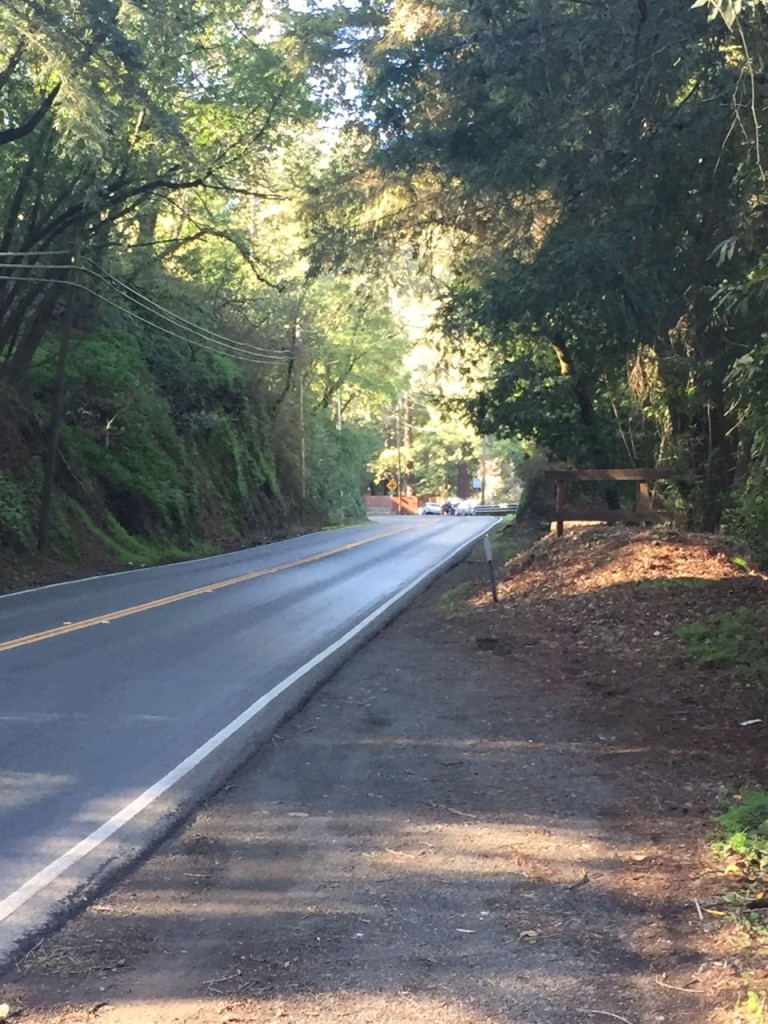 Arrived at the Winery

Eventually I reached Korbel. You may recall them as the surprise winner of our amateur party-pretending-to-be-a-wine-tasting event in my New Years blog. 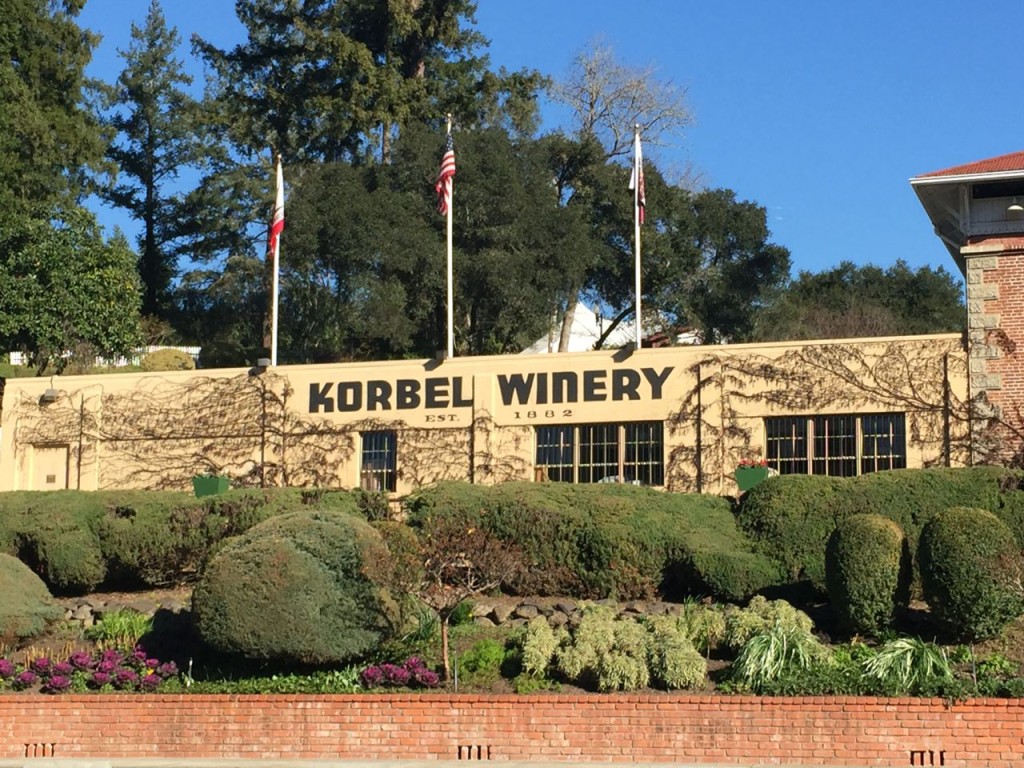 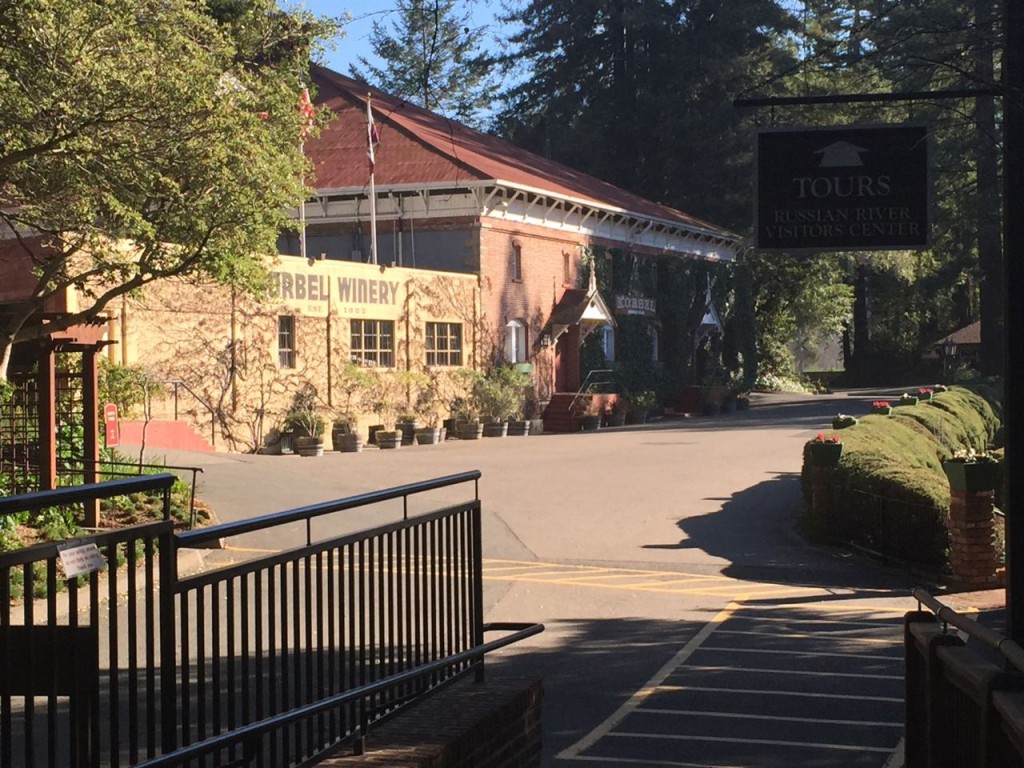 I was happy for the chance to enjoy wine at Korbel. There were two bubblies that I especially wanted to sample. I like Korbel’s Natural but rarely find it in Michigan. And I hankered for the Blanc de Noirs, which I had not tasted.

It turned out that there were two Blanc de Noirs of totally different sugar content. There were a non-vintage one ($10, 1.5%), and a Reserve ($25, 0.75%). I didn’t realize this, opted to taste the cheapie. Oops! I was rocked back by its unexpected sweetness. However, the Reserve was entirely satisfactory and delicious. Korbel only sells it at their tasting room.

I consumed no more than one flute’s worth of bubbly at Korbel (5 or 6 ounces), allowing me to continue to yet another destination. I cheerfully headed off to Iron Horse Vineyards, the last spot in my high-speed odyssey.

Again, Google zigged me through rolling bucolic countryside on winding roads. Traffic was light except when I would suddenly come up behind a half-mile of stopped vehicles. They were patiently awaiting the change in a traffic light that some idiot had installed way out in the boondocks.

Iron Horse Vineyards lay down a small turnoff from the main highway, a minor road that disappeared into the distance. Well down this road, when I despaired of ever seeing civilization again, I saw a sign for the winery. 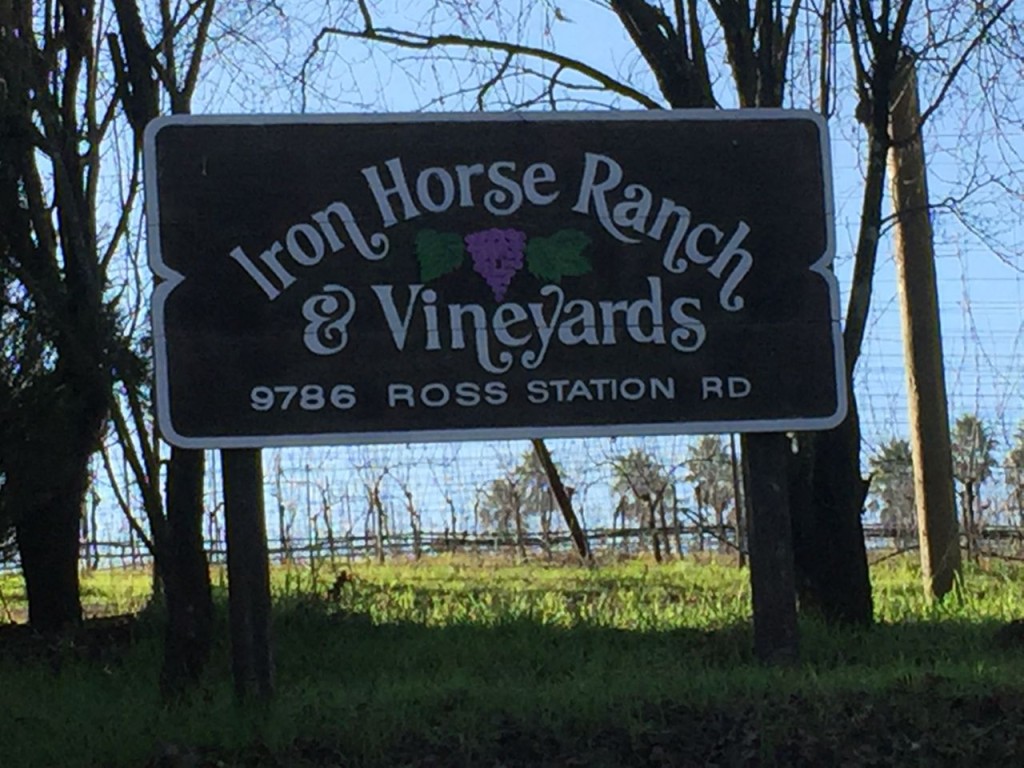 The pavement got narrower, changing from two lanes to not-quite-two lanes to OMG an actual one-lane road. The path became narrower and ruttier, winding on past all dwellings and even past warning signs NO OUTLET. Thankfully for my mental stability, I was in Northern California and not somewhere deep in the South: did you ever see the movie Deliverance? 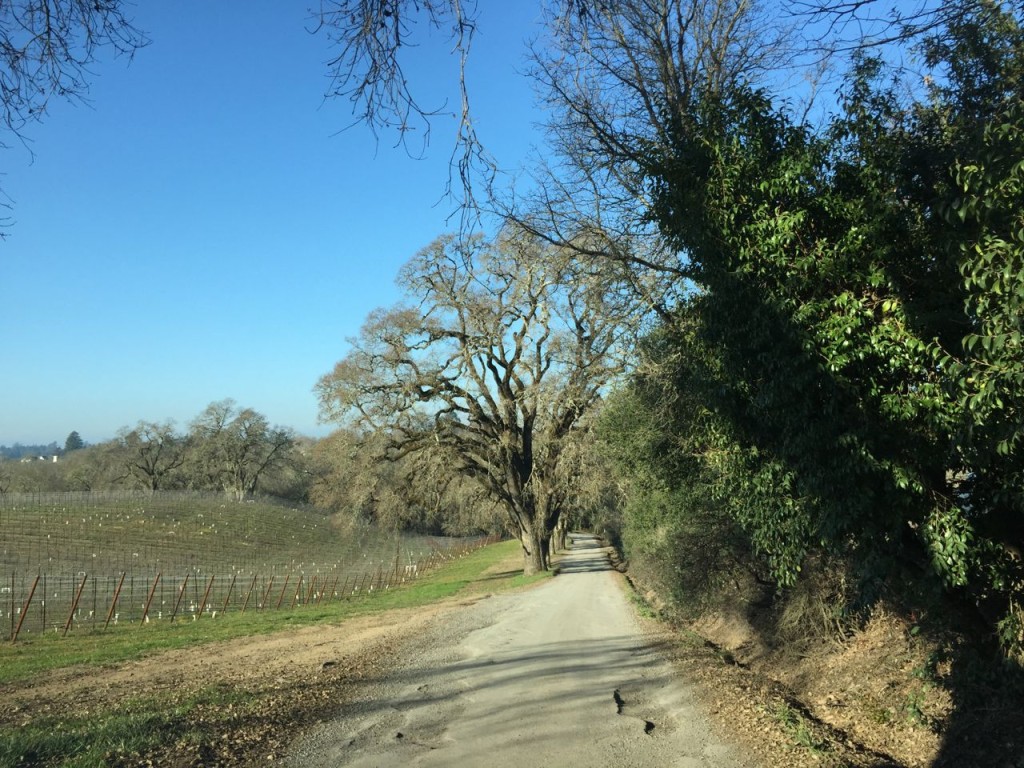 The road continued to shrink, and the single lane lost both its shoulders. I learned the local protocol when a lone pickup truck approached me. No doubt it was finally escaping after weeks lost in the woods. The driver stopped a half-mile ahead of me, waiting patiently while I hogged the single lane. I eventually squeezed around him with a thank-you wave.

Lost in the Country

After what seemed like hours, the road widened and I came to a building. I was no more than a shabby barn, on the right side of the road. It was the only thing in sight. Thus I parked my car, got out, and walked back and forth across the front. There was no door. No sign. Nothing.

On the other side of the road was a man in work clothes doing something with a rake. I asked him about the fictitious Iron Horse Winery that a sign miles back claimed lay on this road. He pointed to the road ahead, which started up a hill and disappeared into the trees.

Reclaiming my car, I continued on the road and made a miraculous discovery. Namely, that although the road remained narrow, it gained both shoulders and a reasonable paved surface. Eventually I came to another two buildings. The road seemed to end in a dirt parking lot framed by trees. One building, barn-red in color, was accessorized with stainless steel tanks and pressurized cylinders. 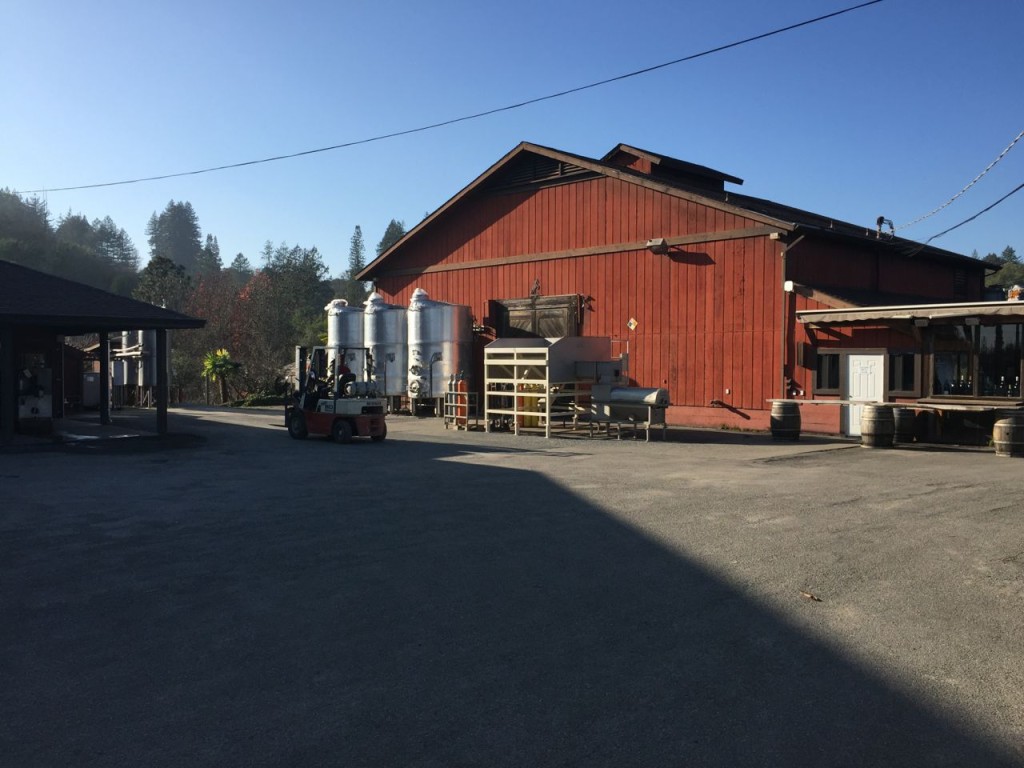 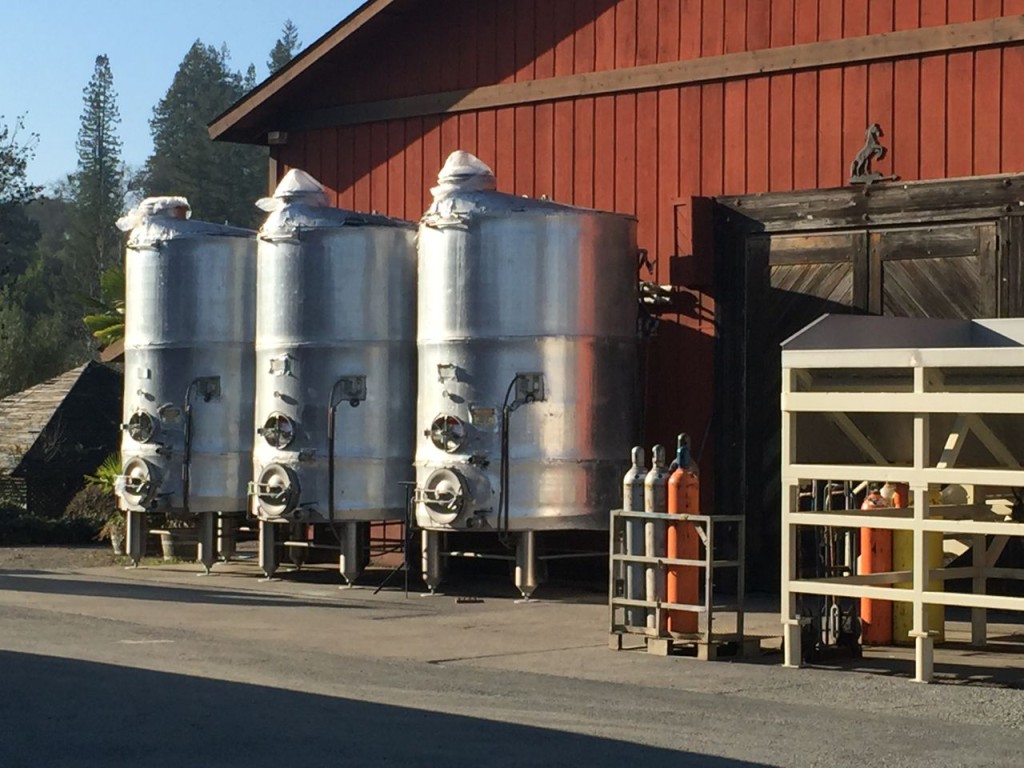 In keeping with the just-us-folks architecture, the right-hand end of the building sported a shabby add-on, partially covered by a roof. It was the Iron Horse tasting shack, as described in the previous blog.

Bucolic to a Fault?

During my long journey to Iron Horse, I was distracted by increasing anxiety that I would never find the end of this road. My rotting bones would someday be discovered amid the ruins of an abandoned winery, now overrun with rodents and sharp-toothed canines. The relief at finally spotting my destination distracted me from the elegant final approach to Iron Horse. However, I got to enjoy their landscaping when I departed.

My way out led down a lane framed by stately palm trees. The road romantically disappeared over the crest of the hill. 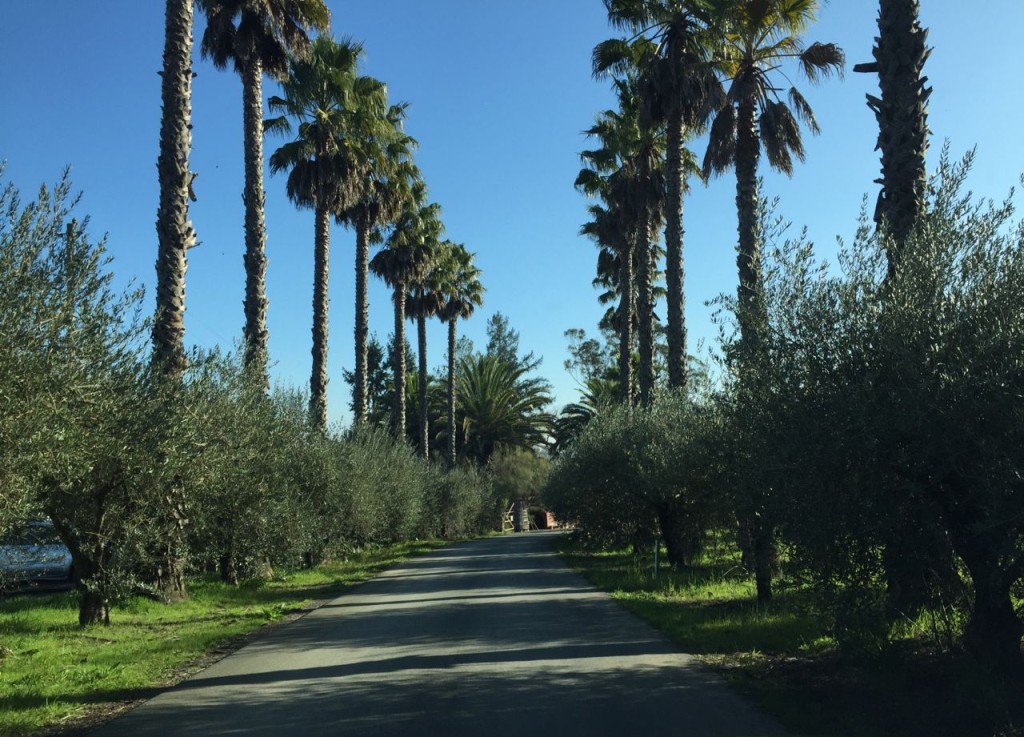 The trip back was much better. Have you ever noticed that it’s much faster returning from an unfamiliar place than it is getting there in the first place? I could even take time to smell the roses – well, enjoy the red hot poker flowers – by the roadside. 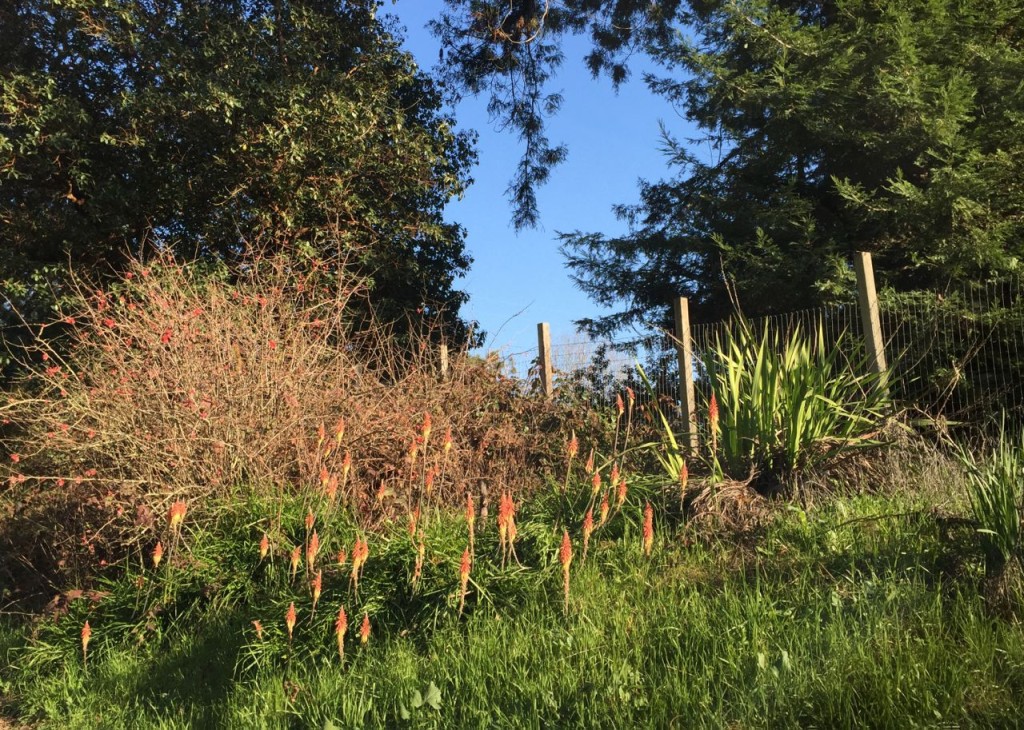 After reaching the guest house in Sebastopol my trip was not yet complete. I still had condo business to transact, consuming the next 24 hours, at which time I headed to Santa Rosa Airport.

In fact, STS, as it is known, is officially called the Charles M. Schulz–Sonoma County Airport. Like many small airports I have seen, it has much to commend it:
– Car rental services walkably close, no shuttle bus required.
– A baggage carousel in a loop that must be less than fifty feet all around. Luggage is manually loaded on the outside and delivered to your eager hands in mere seconds.
– Best of all, pleasant and friendly staff members, in every job function and everywhere you turn.

One of these ambassadors of welcome informed me that the airport’s honoree Charles Schulz, the Peanuts cartoonist, lived for 30 years in Santa Rosa. He was widely loved for his charitable and personal support of the community and its schoolchildren. Schulz died in 2000, when my informant must have been no more than ten years old. Therefore, he certainly left his mark on the community.

As befits an airport named for Peanuts, the public areas are well equipped with cartoon memorabilia:
– The airport logo features Snoopy in World War I flying ace attire, piloting his doghouse into – what else? – a dogfight.

– Four-foot tall figures of Snoopy, Charlie Brown, Lucy and Linus are dotted around, nicely sized for children to visit with. 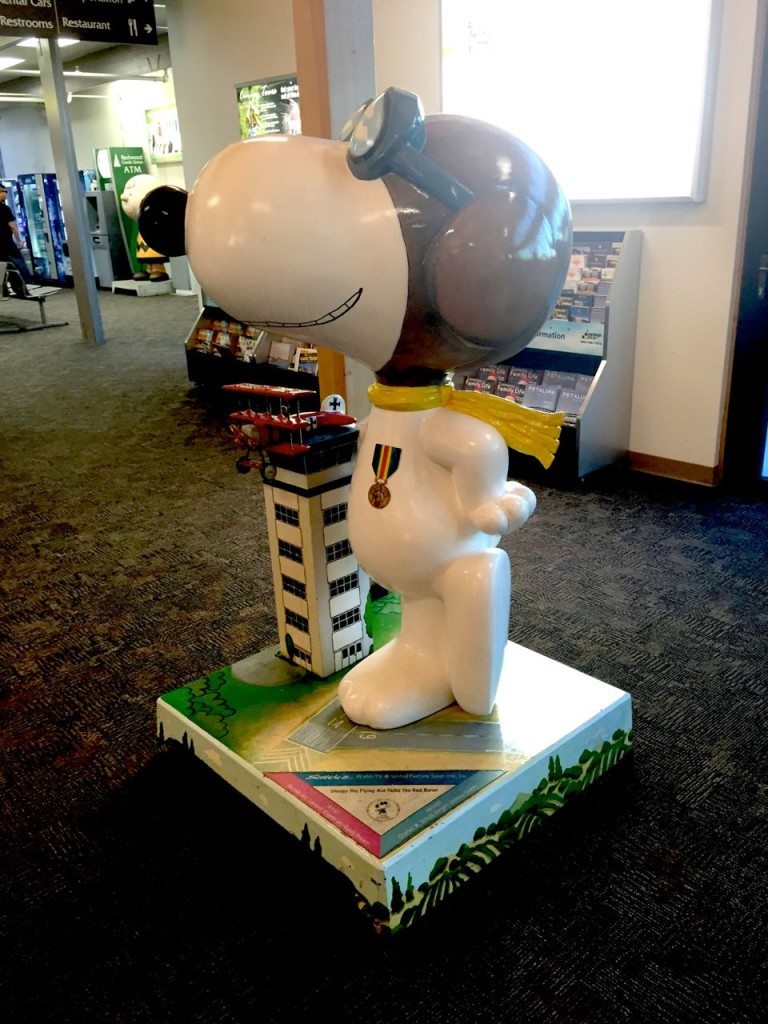 – The information booth is a replica of Lucy van Pelt’s psychiatric booth. 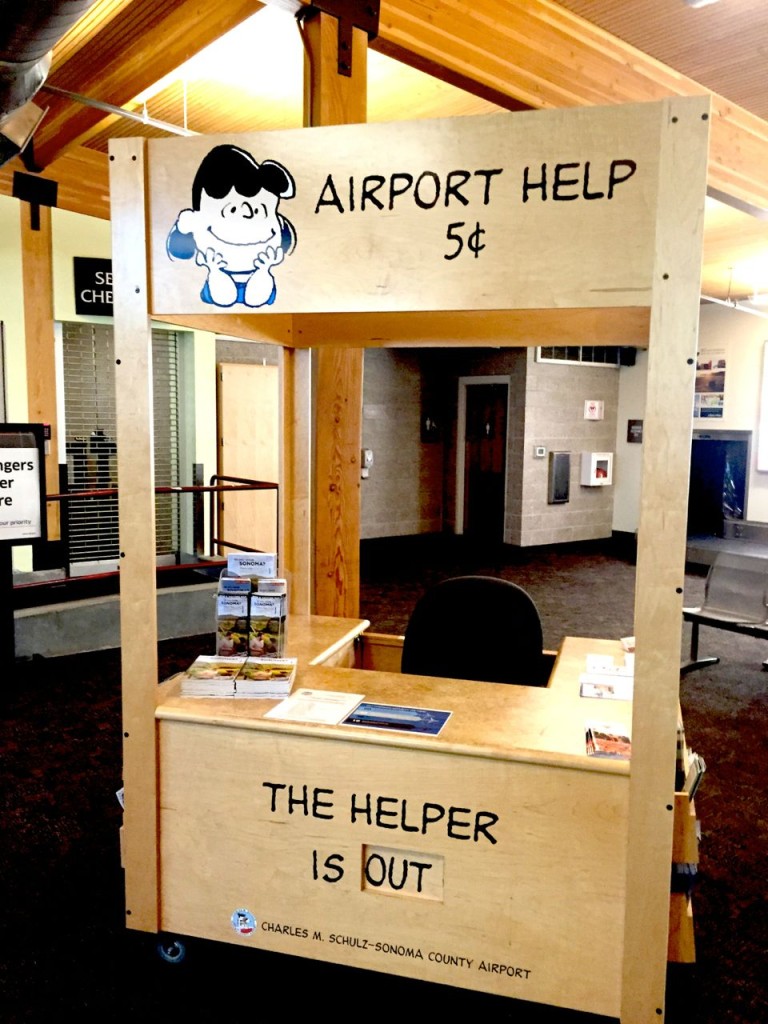 – The walls of the boarding room, past the part-time security checkpoint, feature framed four-panel Peanuts cartoon strips.
– The restaurant menu consists of a page of “normal” airport food (salads, sandwiches, burgers) and a page of sushi. The latter includes a Snoopy Roll, tasty enough, built around shrimp tempura.

The airport’s theme is a great plus for the Sonoma area. It offers a cheerful welcome and farewell, a heartening antidote to the burdens and boredom of modern air travel. Would that all airports offered its intimate scale, distinct personality, and unfailing friendliness.

California champagne country is pleasant to visit for many reasons. Do you have favorite destinations where both the airport and the countryside around it make you smile?