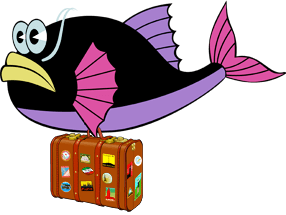 Invasive species are colonizing our lakes, rivers and coastal areas. As described in Part 1 of this blog, these fish invaders are disrupting human activities, both recreational and economic. This Part 2 blog describes how marine scientists are battling invasive species with a wide variety of technologies.

Part 1 of this blog described hitchhiking as a major transportation option for invasive species. In this case, the main method of prevention is education and regulation: explaining and requiring sound management practices, including cleaning of equipment, to counter invasive species. The previous discussion of hitchhiking referenced the documentation in this area.

Invasive species who travel via canals constitute a difficult problem. The problem is getting increased attention right now because the Egyptian government is almost doubling the capacity of the Suez Canal, from 49 to 97 ships per day, which will also make things easier for marine interlopers.

There seems to be no single magic bullet, but scientists have studied, and implemented, a variety of invasive species barriers in canals:

Salinity. The Suez canal had a natural barrier to traveling fish beginning with its opening in 1869: it passed through the Great Bitter Lake, a former salt pan. The extra salinity discouraged invasive species from traversing the canal for about eighty years, by which time the salt deposits had been largely worn away. Scientists such as Dr. Noa Shenkar of Tel Aviv University have proposed re-salinating the Suez canal by pumping in brine from desalination plants.

Anti-Salinity. (Alas, the word “salinity” does not seem to have a clear antonym.) Just as excess salinity is a barrier for invasive species, so is fresh water. To reduce the digging required to create the Panama Canal, Gatun Dam was built to create a large artificial lake along the canal route. Gatun Lake spans 21 miles of the Panama Canal’s total transit distance of 48 miles. As a freshwater lake, Gatun Lake is an effective barrier for saltwater-dwelling marine life that might otherwise travel between the Pacific Ocean and the Caribbean Sea.

Electric Fields. Asian carp are well established in the Mississippi River, which connects with Lake Michigan through the Chicago Sanitary and Ship Canal. Electrified barriers have been used in the canal to prevent carp from becoming established as an invasive species in the Great Lakes. A few invaders have made it through the barrier, although they have not yet significantly infested the Great Lakes. Smith-Root, a firm in Vancouver, Washington, has installed electric barriers at 49 sites in the U.S. and Europe to discourage many different invasive species, including sea lions.

The Underwater Disco. Another no-fly zone for invasive species is something The Economist has called an “underwater disco.” Curtains of air bubbles are already being used for a variety of purposes, including blocking jellyfish from entering water intake pipes in the U.K. and steering sharks away from Australian beaches. To fend off the bolder varieties of invaders, Ovivo enhances the bubble curtain with directional strobe lights and sounds that are unpleasant to the fish. Just as the sound volume issuing from an Abercrombie store reliably steers me away from its door, this “bio acoustic fish fence” has been used to guide Chinook salmon toward a safer migration route on the Sacramento River.

Fighting Invasive Species After They Arrive

Inevitably, some invasive species evade all barriers and take up residence, often crowding out native or more desirable water dwellers. Thus there is also a significant demand for invasive species control after the fact.

Piscicides. When invasive species become too well established, agencies may resort to piscicides, that is, fish poisons. Unfortunately, these poisons are not very species-specific. In the Chicago Canal, the chemical rotenone successfully killed a huge number of fish but not all of the principal target, the Asian carp. There has been somewhat more success using the piscicide TFM against sea lampreys, since it can be applied just during a few days when their larvae are most vulnerable. It helps control but does not eliminate lampreys as invasive species in the Great Lakes.

Biological Controls. Biological controls of marine invaders take many forms. It would be great if you could import a sea animal that would selectively eat the unwelcome critters in your body of water. Unfortunately, as mentioned in Part 1 of this blog, many of the troublesome invasive species today (e.g., largemouth bass, walking catfish, mosquitofish), were purposely introduced for their desirable attributes, but then proceeded to get out of hand. Suitably chastened by nature’s unintended consequences, ecologists today are attacking invasive species by more subtle means:
– Pheromones. Pheremones are chemicals that trigger behaviors, such as migration or mating, in particular species of animals, including humans. They act from outside the organism’s body, analogously to the hormones that act inside an animal. University researchers are studying two lamprey pheromones that guide larvae migration, and that attract males to females for mating. The scientists hope to disrupt the lamprey life cycle with chemical signals that are so specific that they will have no significant effect on other species.
– Gene Mapping. Canadian and U.S. government scientists are mapping the sea lamprey’s genome, hoping to understand its immune system and where it might be vulnerable to biological controls.
– Sterile Males. The release of sterile male fish is being tried for control of lampreys in the Great Lakes. They compete with fertile males and thereby reduce the number of fertilized eggs that are produced by the females. This approach is analogous to the sterile insect technique successfully being used to control some insect species. Genetically engineered sterile fish are used in aquaculture because such fish grow more rapidly, not “wasting” energy resources on reproduction; thus aquaculture technology can help marine scientists fight invasive species. You may have (logical or illogical) reasons for avoiding GMO foods but GMO is nevertheless an important tool with which to fight invasive species.
– Daughterless Carp. Researchers in Australia and at Auburn University in Alabama are modifying the genes of male carp so that their eggs will develop only into males. Initial tests on zebrafish have shown that females can be eliminated from the population, so that the targeted fish would eventually die out. (Unless, of course, nature spoils human plans by teaching the fish to cross-breed with other species in some way that cancels out the genetic change!)
– Lethal Mutations. A related genetic modification approach is to produce fish that carry a dominant gene that is fatal to female offspring. Males carrying such a gene who succeed in fertilizing a female’s eggs thus don’t contribute to the invasive species problem.

Stocking with Sterile Fish. New York State has found a way to use grass carp to control excess pond vegetation without the risk of them taking over from other species. When the newly fertilized eggs of this fish are shocked with hot or cold water the cells merge, resulting in the retention of three rather than two sets of chromosomes (triploid cells). The resulting adult fish are sterile, thus they cannot become established as an invasive species.

Some would say that the worst problems of invasive species are the fault of humans, not properly respecting the natural order. However, that argument does not go very far: if humans had not tried to control the natural order, the sabre tooth tigers would have finished off our ancestors and we would not be here discussing the fine points of ecology.

A more valid point is that we need to be cautious when we try to rebuild our environment. The world is a terribly complex place, and we keep learning more about it every day. For example, it’s now appreciated that bacteria, which we normally think of as the cause of diseases, are also essential to all life.

If you or I were czar of the universe, no doubt we would be very cautious about experiments performed on the planet on which we live. Since we are not, perhaps we should at least support an orderly approach to the future:
– Transparency. Ensure that major projects have full transparency and accept advice from a wide range of constituencies – legal, political, ethical, economic, regulatory and of course scientific.
– Gradualism. Proceed in small, reversible steps until unintended consequences have a chance to emerge and be assessed.
– Regulation. Although “government intelligence” is an oxymoron to some people, a reasonable level of governmental regulatory oversight seems necessary to protect the majority from poor decisions by a few.
– Balance. Recognize that neither a pure natural world nor a totally human-designed world is likely to be best for our species; human activity must always try to strike an intelligent balance.

Drawing Credit: Adapted from “rones” and “frankes” on openclipart.org