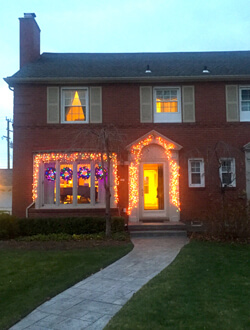 Christmas decorations bring light and joy to the winter season. They are intertwined with both faith and custom, and have their origins long before Christianity.

Festivals or celebrations have been observed throughout human history. They often center upon seasonal events that affect the food supply, such as harvest time in the fall and the arrival of the growing season in spring.

The more northern climates such as northern Eurasia and Scandinavia also celebrate at the solstices. Midsummer, around June 21, marks the longest day of the year. Midwinter, December 21/22, is not only the shortest day of the year, but also marks the time when the days will again become longer as the sun returns to the northern latitudes. For prehistoric humans suffering a cold winter, the arrival of longer days might well have been a cause for celebration.

Here are a few of the winter festivals that, in one form or another, are part of our customs today:

Hanukkah is the well-known Jewish holiday celebrating the rededication of the Second Temple in Jerusalem, dated at 516 BCE. It is also known as the Festival of Lights in reference to the custom of lighting the menorah. Hanukkah is celebrated for eight nights and days at a fixed date in the Hebrew calendar that falls between late November and late December in the Gregorian calendar. It is marked by daily prayers and blessings, gift-giving, traditional foods and other customs.

Saturnalia was an ancient Roman festival celebrated in mid-December. It was marked by a carnival atmosphere with gift-giving, gambling, role reversals and continual partying.

Yule or Yuletide originated as a pagan festival. Its Old Norse name predates Christianity. It occurred close to the winter solstice (December 21/22) and featured feasting, drinking and sacrifice. Yule was re-interpreted as a Christian tradition and became a Christmas celebration.

Dongzhi is a winter solstice festival celebrated in China and other countries of East Asia. It originated during the Han Dynasty (202 BCE – 220 CE) and is marked by special foods within the family and by religious rituals at ancestral temples.

Christmas is of course the Christian holiday marking the birth of Jesus. There are conflicting theories as to why Christmas is celebrated on December 25. The Bible does not mention a date, but describes shepherds in the fields and a Roman census. According to the United Church of God, neither of those activities would have occurred during winter. The choice of December 25 is plausible however as a way for early Christianity to more easily convert pagans by re-interpreting their customs and festivals.

Although one might think that there are already plenty of festivals to celebrate, people have elected to create still more holidays. Here are several, beginning with a solemn celebration and proceeding to occasions that seem to be more tongue-in-cheek:
– Kwanzaa is a serious though recent invention, created to honor the African-American heritage.
– Festivus is an invented secular holiday that opposes the commercialization of Christmas but also parodies it.
– Atheists, not wanting to be left out of the winter party, have invented Newtonmas, celebrating the birthdate of scientist Isaac Newton.

The Independence of Faith and Science

To understand the activities of Christmas, both Christmas decorations and customs like gift-giving, we need to digress into a discussion of Faith.

Faith is a word with a wide range of meanings. It is used to signify many nuances of belief or confidence in someone or something. The best definition of faith for the present discussion is one of the options offered by the Oxford Dictionary:

Faith: Strong belief in God or in the doctrines of a religion, based on spiritual apprehension rather than proof.

In other words, faith is belief in something that you cannot see or prove.

Faith’s place with respect to science is analogous to Godel’s incompleteness theorem in mathematics: that within any logical system, there will always be statements that are true, but which are unprovable within the system. Thanks to Godel’s proof, we know that there are truths that science can neither prove nor disprove, and faith lies within that class of propositions.

Science may, and does, study how mankind experiences faith and how humans have developed beliefs and rituals. However, Science is impotent to examine the true-ness of Faith. Both faith in God and faith in the nonexistence of God (atheism) are among the beliefs that science cannot truly address. I have previously remarked (Scientific Truth and Other Falsehoods) that any article of faith is by definition 100% true; whereas a hypothesis in science is never 100% proven.

For example, the Abrahamic religions (Judaism, Christianity and Islam) teach the eventual coming of a messiah, an “anointed one,” who will bring great changes and perhaps the end of time itself. Belief (or disbelief) in a coming messiah is a element of faith. If we happen to live long enough to actually experience such an event, the messiah will no longer be a matter of faith. Instead, it will be a phenomenon that can be studied with the tools of science – that is, assuming that science still holds any validity at that time.

As noted above, the celebration of Christmas incorporates many customs derived from pre-Christian traditions:
– Gift-giving
– Charity to the poor
– Decoration with lights
– Decoration with winter plants, especially evergreens
– Santa Claus, whose appearance and behavior borrow from the Norse god Odin.

However, that does not mean that putting up Christmas decorations advertises that you are committed to paganism. Thanks to reinterpretation through the years, the devout Christian derives religious meaning from many Christmas rituals that have ancient correlates. For example:
– The giving of gifts recalls the gifts of the Magi to Jesus;
– Christmas trees, being evergreen, symbolize eternal life; and
– Santa Claus, for the Christian, is associated with the historic Saint Nicholas.

The celebration of Christmas has become woven into American culture as a nostalgic tradition that we gladly re-enact every year. The most devout and the most anti-religious may express discomfort with Christmas decorations. However, for most of us Christmas is what it is, bringing to each of us both personal meaning and joy.

Southeast Michigan, where Nola and I live, is enriched by large populations of Jews, Muslims and, one presumes, atheists. However, its traditions are predominantly Christian and for that reason the decorations that one sees at this time of year tend to be Christmas decorations.

To reward you for taking the time to look at this blog and to avoid wearing you out completely, the rest of this post is a photo tour of some Christmas decorations currently on display in and around Grosse Pointe, Michigan. 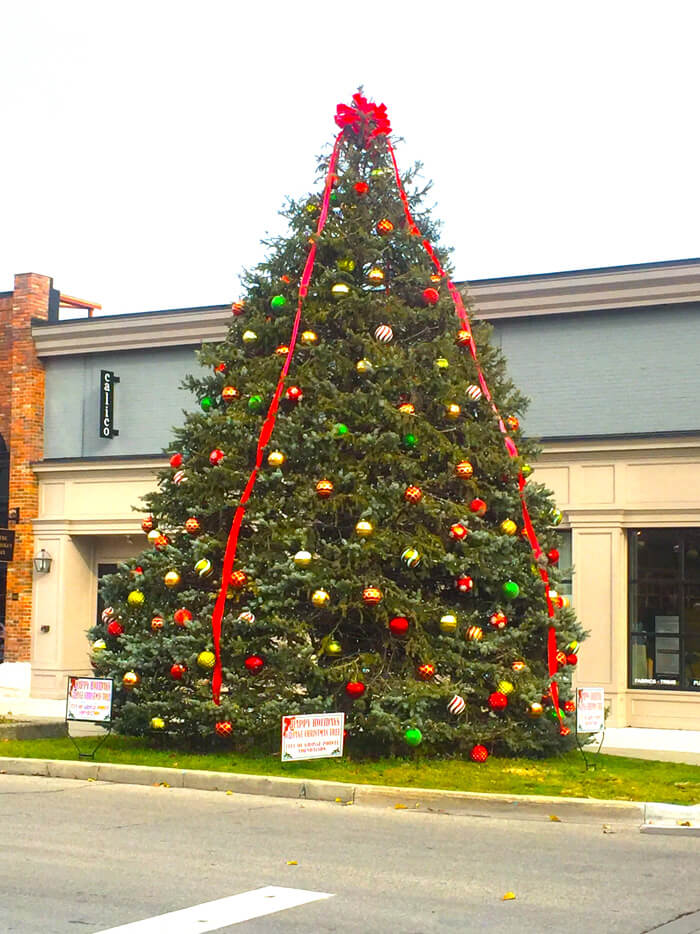 This handsome evergreen is a permanent resident of the village of Grosse Pointe; every December it is festooned with Christmas decorations 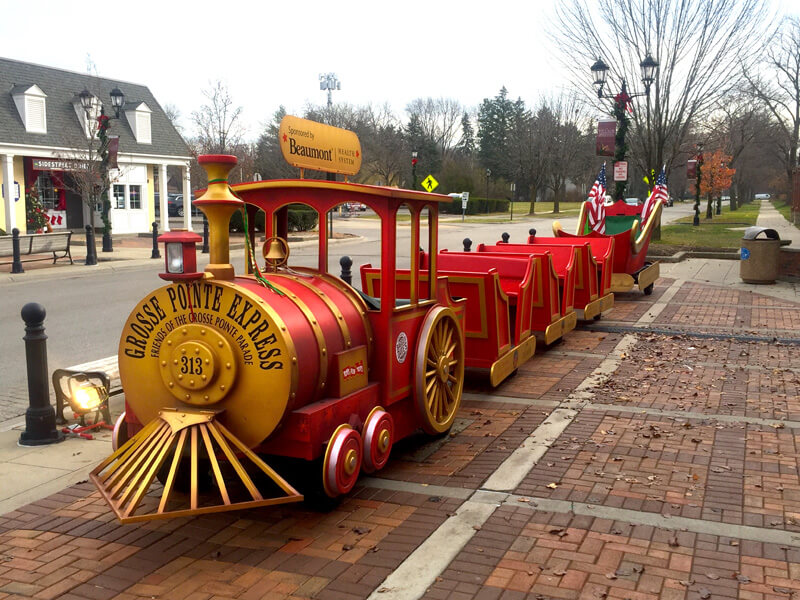 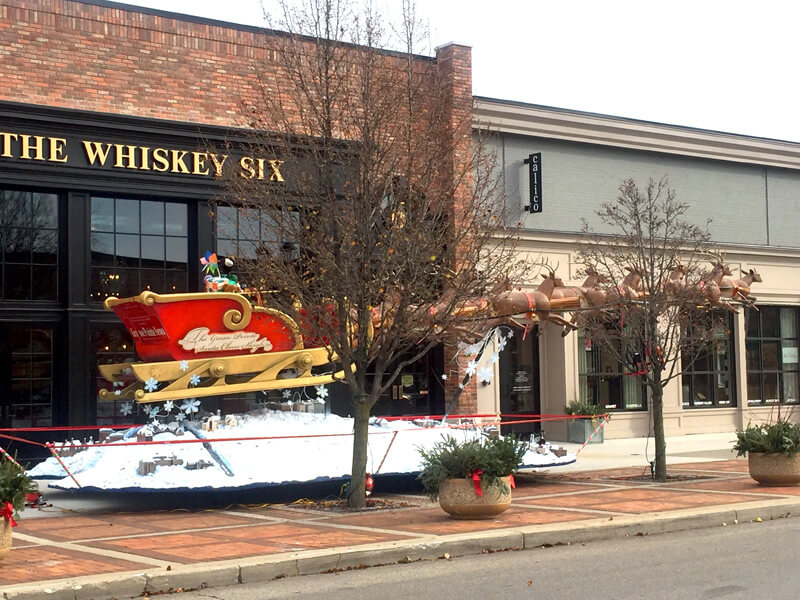 At the end of the parade comes Santa Claus in his sleigh pulled by nine flying reindeer; Santa has gone back to the North Pole, but his sleigh remains downtown for the holidays 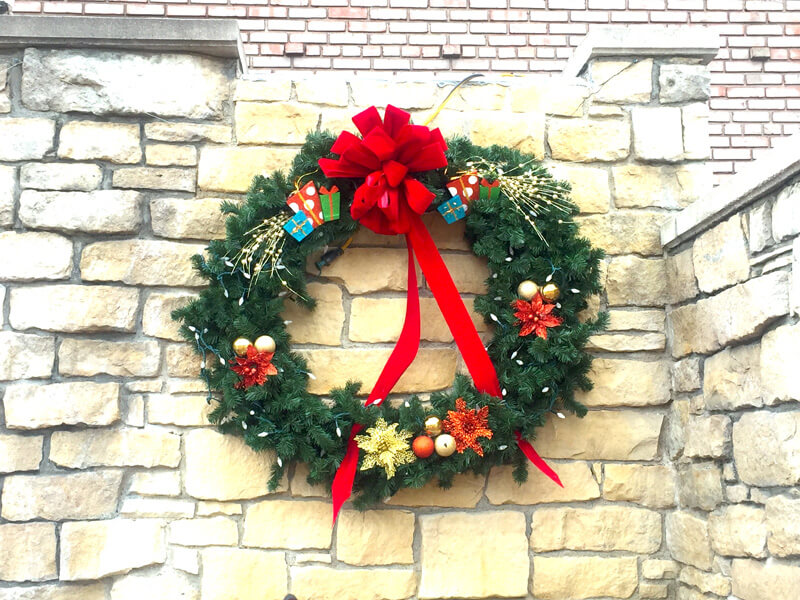 Lights, garlands and wreaths like this one add festivity to the downtown 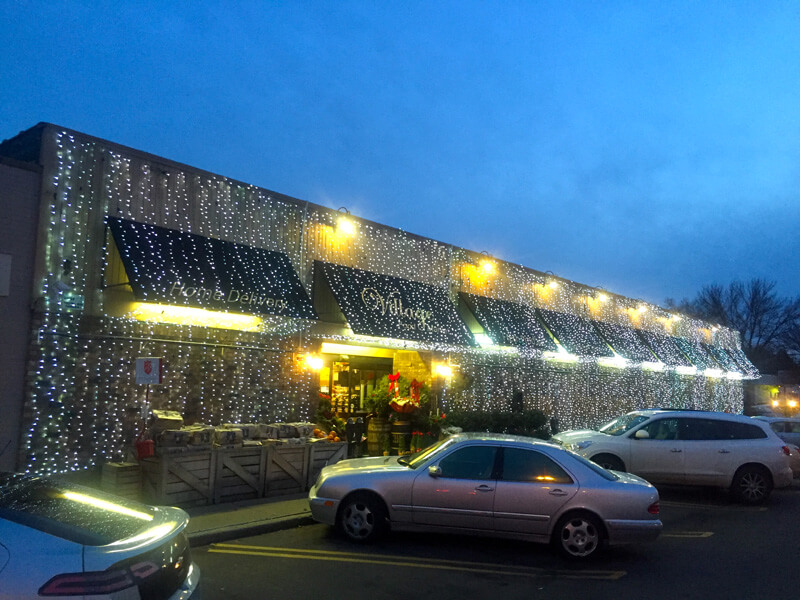 The Village Foods market covers their façade with cascading lights 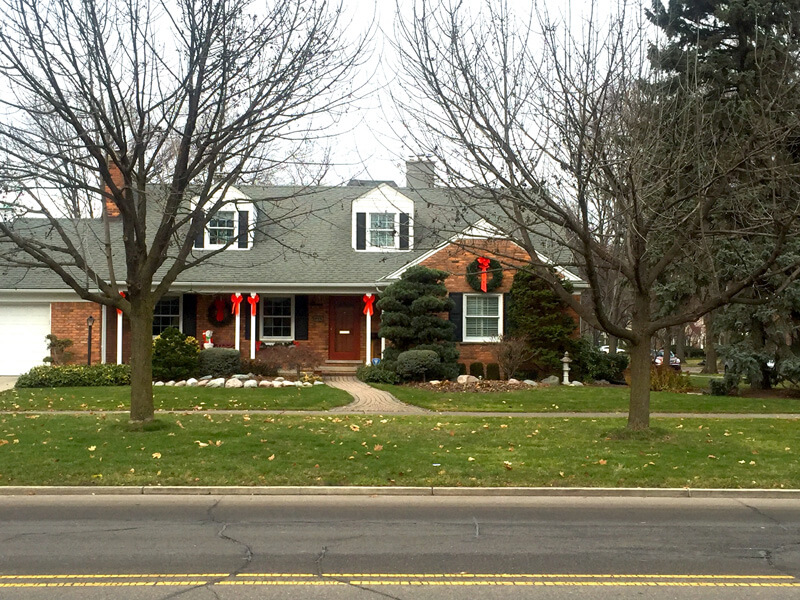 Sometimes, less is more. This Grosse Pointe family decorates their home beautifully by adding wreaths and bows to their existing landscaping 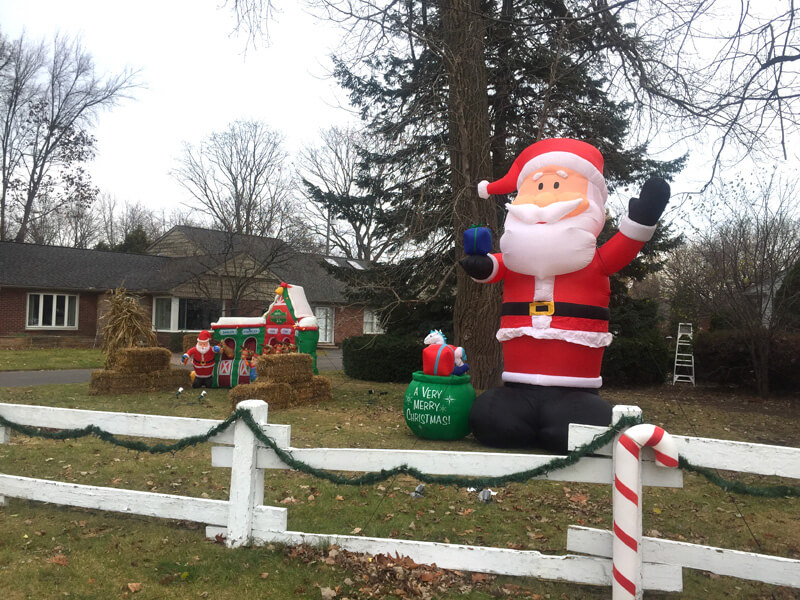 However, in every community there are folks for whom more is more; this home sports blow-up figures as tall as the house itself 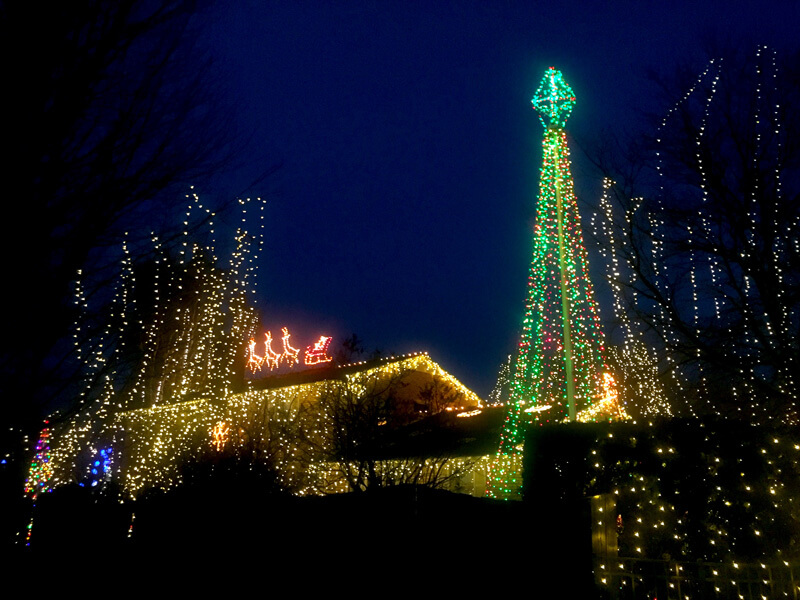 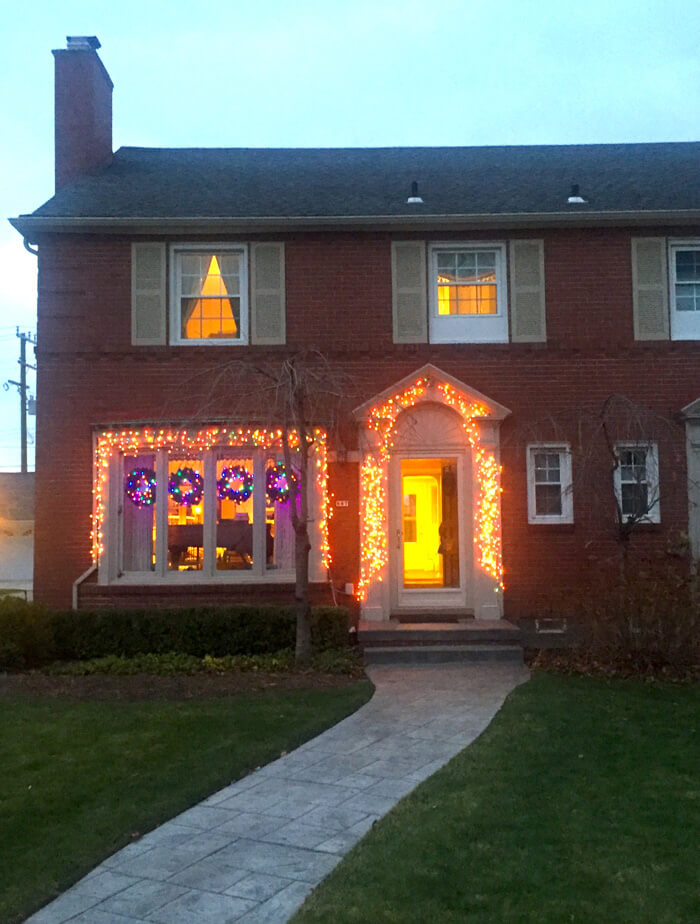 Christmas decorations bring cheer and a sense of community. Nola and Art wish you the blessings and joys of the holiday season!