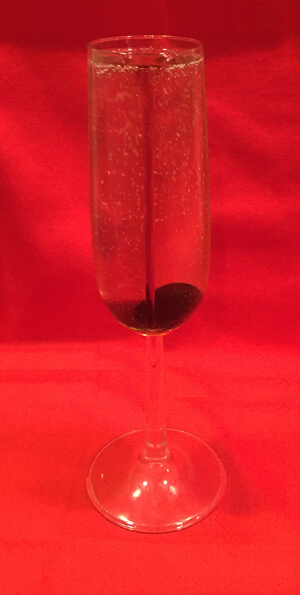 Hemingway Champagne is a cocktail that toasts you right back. It says, “Happy New Year! And by the way, you’re witty, sophisticated and good-looking!”

This blog traces the history of Hemingway Champagne, an especially pleasant way to enjoy wine. Also, the blog reveals a particularly wonderful recipe, imported all the way from Santa Fe, New Mexico.

This is one of a number of posts on artchester.net about the pleasure and the science of champagne and other sparkling wine. (See the Topic Index, Beverages section.)

In March 2017 I received a very nice article: Champagne Vs Prosecco Vs Cava: Which Is The Best? The article was written by Ann, a purchasing manager and wine aficionado. She’s one-half of the Ann-and-Gary team behind the website DontTellTheJonses.com. Unfortunately, as of October 2018 their website had disappeared.

Ann’s article explained the similarities and differences among and between the three most famous European bubblies. If you’re not going to pop the big(ger) bucks for Champagne, Ann prefers Cava to Prosecco, and personally I agree with her. I find most Prosecco too sweet for sipping, even when its label describes it as brut (“unsweetened“).

When you mix a sparkling wine to make a cocktail, the ingredients are important but so is their balance of flavors. The recipe given later in this blog would work well with Cava or Champagne instead of Prosecco. It would produce a dryer cocktail, and if that were not to your taste, a bit more cherry juice would correct it.

The basic ingredients of Hemingway Champagne are as follows. Pour a jigger (1.5 ounces) of absinthe into a flute and then fill it with champagne. I use here the familiar U.S. term champagne to describe all dry sparkling wines, for reasons discussed in an earlier blog.

At the time Ernest Hemingway revealed his favorite cocktail (1935) absinthe had the reputation of a scandalous and addictive beverage. It was banned in the U.S. and in most European countries. Absinthe was the liquor of dissolute Parisian bohemians and had reportedly caused a Swiss farmer to murder his entire family. The notoriety of this key ingredient meant that no one could rationally assess the gustatory merit of Hemingway Champagne when he published his recipe.

Absinthe and Hemingway Champagne spent many years in ignoble oblivion until absinthe was rehabilitated beginning in the 1990s. By then, people considered absinthe an unsweetened spirit that was noteworthy primarily for its high proof – 45 to 72% alcohol by volume (ABV). A scientific study in 2006 confirmed that its primary risk came from its high alcohol content and not from any other evil ingredient. Thus its lurid reputation as an addictive and homicidal drug was re-understood as a fantasy of early-twentieth-century Prohibitionists.

Each summer, Nola and I visit Santa Fe, New Mexico. Santa Fe has an outstanding summer opera season, numerous art galleries and shops, and a diverse Native American and Hispanic culture. It also boasts a unique and delicious New Mexican cuisine. The food incorporates local cultivars of chile peppers, especially those grown in and around the Hatch Valley of New Mexico.

One of Santa Fe’s most beloved restaurants is The Shed, a downtown institution since 1953. It takes no reservations at lunch time and you always have to get on a list for a table. Since they give you a wireless pager, you can amuse yourself by browsing the surrounding shops while you wait.

The Shed has the most delicious red chile that I have encountered. Its meaty texture bursts with rich flavor, yet (for my Texas-raised taste) is not excessively spicy. However, since they serve many tenderfoot tourists, The Shed also offers some great foods that contain absolutely no chile. These include mushroom soup, garlic toast, salads, burgers, sandwiches, grilled meats and a heavenly mocha cake dessert.

Despite these distractions for those of faint heart or weak gullet, the New Mexican entrees with their hearty red and green chiles are the real drawing card.

I was so enamored of their food that it took me a while to discover that The Shed also has a full bar. There’s a full menu of margaritas and tequilas, essential for any Santa Fe watering hole, plus wine, sangria and mixed drinks.

One of The Shed’s finest drinks does not appear on their bar menu. However, it can be obtained from a cooperative bartender. That is the Hemingway Champagne, which The Shed calls by its alternate name, Death in the Afternoon.

Death in the Afternoon, of course, references Ernest Hemingway’s 1932 nonfiction book about the ceremony and traditions of bullfighting in Spain. Hemingway uses grandiose terms to describe this custom that many consider brutal, while ruminating on the deeper meanings of fear and courage.

The Shed has improved Hemingway Champagne with two inspired additions. One of them is to replace one-half of the absinthe with St. Germain liqueur. It’s a French elderberry spirit whose fresh taste has won a number of international awards.

The other addition is an authentic Maraschino cherry with its syrup. The cherry used is not the violently red, artificially colored item often adorning a tropical cocktail or an ice cream sundae in the U.S. For the connoisseur, there are two authentic non-artificial Maraschino cherries of choice: Luxardo and Amarena Toschi. A scan through their Amazon reviews (numbering 199 and 46, respectively) convinced me that each of these fruits has its own passionate adherents.

Only Genuine Maraschinos Are Worthy of this Cocktail

A fan of genuine Maraschinos would not think of polluting the holy temple of the body with those bright red plastic orbs called Maraschino cherries by your supermarket. However, a Luxardo maven might grudgingly consume a Toschi cherry, and vice versa.

In any case, The Shed added a Luxardo cherry to the Hemingway Champagne. Also, the bartender allowed the thick syrup to drizzle down the side of the champagne flute. If Death in the Afternoon alludes to the passing of the bull, the streak of cherry juice recalls its blood. Yes, this might turn away a squeamish toper.

No mind. The combination of the St. Germain and the Maraschino cherry bring a civilized and enriched flavor to the Hemingway Champagne. What’s more, the additional sweetness means that if you are using less than the finest champagne, it won’t spoil the mix. The fruit flavors help tame the bubbly.

In other words, this is a mixed drink. It’s a different animal than a pristine flute of champagne, so please enjoy it for what it is.

I was fortunate to learn about this off-the-menu cocktail. And doubly lucky to have a bartender who had gotten up on the right side of his bed that morning. Because he gave me the exact recipe used by The Shed, right down to the brands of libation.

The full recipe as a downloadable PDF file is HERE.

However, a word of caution: Hemingway Champagne packs much more of a punch than straight bubbly.

Prosecco is 11% ABV (22 proof) and St. Germain is 20% ABV (40 proof). When you combine these two with the very alcoholic absinthe, the combined cocktail becomes a lot more potent. Compared with a 6-ounce flute of straight prosecco, The Shed’s version of Hemingway Champagne is 49% to 80% more intoxicating, depending on the proof of the absinthe. And Hemingway’s 1935 version is 77% to 139% more alcoholic – basically, twice the buzz per glass.

Papa Hemingway’s 1935 guidance for this beverage was to “drink three to five of these slowly.”

Hemingway was an alcoholic throughout much of his life and I do not recommend that you follow his advice as to quantity. Appreciate the Hemingway Champagne for its own merit. You may find that a single glass will suffice. It’s an elegant way to enjoy wine and toast the New Year.

I lift a Hemingway Champagne – in fact, any champagne at all – to you! I toast you and yours for a rich and fulfilling 2016.