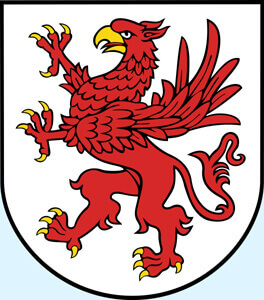 Organ transplant supplies are far too few to help the many people who need them. However, two recent scientific advances are clear steps forward. They move us toward a day of plenty, of organ transplant abundance.

The Organ Transplant Is Not Rare

The organ transplant process has become a well-established procedure at many hospitals in the U.S. and abroad.

Consider the numbers: in 2015, the most recent year for which we have data, there were 30,970 U.S. organ transplant operations, about 80 per day. If we consider body part replacements rather than complete organs, there are many more in addition to the organ transplant. There were 48,792 corneal transplants in 2015. Moreover, there were more than 100,000 heart valve replacements using either mechanical or bioprosthetic substitutes.

Yet the Organ Transplant Waiting List Is Tragically Long

The great success of organ transplant surgery sometimes distracts us from its major failure: the hope it inspires in thousands of needful patients who never get the call that an organ transplant has become available for them.

There are 119,000 individuals on the U.S. waiting list for a major organ today. Most of them are waiting for a kidney. However, there are many others in need of liver, heart, lung, pancreas, intestines or multiple organs. It’s true that there are very many successful transplant operations. Nevertheless, each year 8,000 U.S. patients die waiting for an organ transplant, about 22 deaths every day. There is a similar urgent need in UK and in other countries.

The numbers of potential donors and available organs are simply inadequate to meet the demand.

Since there are far too few organ transplant donations from people, medical innovators have been hard at work developing alternatives. There are three basic approaches, used either alone or in combination:
– Synthetic: Organs or body parts constructed from non-biological materials such as metals and polymers.
– Bioprosthetic: Organs or parts obtained from non-human animals, modified as necessary to serve as an organ transplant into a human. [For simplicity, in this blog I will use animal as shorthand for non-human animal.]
– Chimeric: The creation of animal-human hybrids able to grow functioning organs consisting (mostly) of human tissue.

What Does Chimeric Mean?

Chimeric (or chimeral) means relating to a chimera – the biological term for an organism containing tissues from diverse genetic sources, such as two unrelated animals. The name comes from the Chimera, a fire-breathing monster in Greek mythology with the head of a lion, the body of a goat and a serpent for a tail.

The lead image in this essay is a griffin, which is yet another mythical chimera. The griffin has the body of a lion with the head, wings and talons of an eagle. Since it presumably embodies the strength and fierceness of both animals, the griffin makes frequent appearances in coats of arms.

We will treat the first two organ transplant alternatives only briefly, so as to concentrate on the newest work.

Functioning organs are complex machines that must operate with high reliability for many years without need of external adjustment. For this reason, work in artificial organs has proceeded very slowly. Much more progress has been made with more limited body part replacements such as joints, stents and heart valves.

However, even when limited to part replacement, both the synthetic and bioprosthetic approaches to organ transplant present problems.

In general, synthetic materials installed in the human body serve as nucleation sites for blood clots. These clots may interfere with the operation of the implanted device. They may also break loose and migrate through the bloodstream to cause a stroke. Patients typically need a life-long regimen of anti-clotting medications, which themselves pose health risks.

Manufacturers construct bioprosthetic implants partially or totally of tissue, typically animal tissue. They process the tissue to remove biological markers that might trigger tissue rejection. Bioprosthetics are less likely to trigger blood clots than synthetics. However, since the animal donors have much shorter lifespans than humans, implants made from their tissues tend to wear out and may need replacement.

Digression: Heart valve surgery has a long history, dating from 1952. My half-brother Art (a long story) lived for many years with a pig valve implant, replacing his failing mitral valve.

The essence of chimeric organ transplant is to cause an animal to grow an organ using human tissue, not its own. The resulting organ hopefully becomes a functioning organ transplant in a human. Moreover, since its human tissue has been chosen to be biocompatible, there should be minimal risk of rejection by the recipient.

When I think of chimeras, what comes first to mind is the famous “earmouse” of Massachusetts researchers Cao, Vacanti et al in 1997. 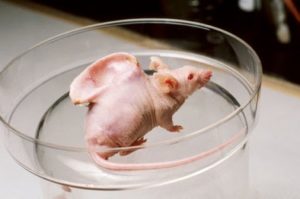 The Vacanti group used a special breed of mouse that does not reject foreign tissue. The research team formed a biodegradable polymer in the shape of a child’s ear. They seeded the polymer with chondrocytes extracted from cows’ ears. They then implanted one of these forms under the skin on the back of each of ten mice. Twelve weeks later they found that the “ears” were stable and growing new cartilage.

The earmouse demonstrated that an animal can nourish and grow an implanted artificial structure incorporating another animal’s tissue. Thus it was an early and particularly dramatic step toward chimeric organ transplant.

An important new result appeared last month from Yamaguchi, Sato and 13 other researchers in Japan, with collaborators in US and UK.

The researchers engineered rats so that their offspring could not develop their own pancreases. Then they injected early-stage embryos from these rats with pluripotent stem cells from mice. The stem cells grew into rat-sized pancreases, consisting almost entirely of mouse rather than rat cells. These pancreases functioned normally in the rats and did not experience rejection, because the mouse cells had been introduced before development of the rat immune system.

The scientists then treated mice with strepozotocin to disable their pancreases and cause them to have diabetes. They extracted islets from the mouse pancreases within the rats and transplanted them into the pancreases of the diabetic mice. The islets successfully grew and restored function to the pancreases, curing the mice of the induced diabetes.

Since the mice that donated the stem cells were genetically identical to the diabetic mice, tissue rejection did not occur. There could have been a rejection problem from the few rat cells contaminating the transplanted islets. However, the immune systems of the recipient mice were able to eliminate the rat cells without disabling the functioning of the pancreas.

Implications of the Mouse Pancreas Work

If the only patients we cared about were mice, the Japanese work showed a clear path to pancreatic organ transplant. However, rats and mice are very similar species, both genetically and structurally. It would be more difficult to, say, induce a cow or pig to grow a replacement pancreas for a human. Moreover, the shape and development of an organ depend not only on its genetic makeup but also upon the environment around it within the animal.

Despite these quibbles, the growth of functioning, transplantable mouse pancreases within rats represents a significant advance in organ transplant research. Work is proceeding to try an analogous experiment with pigs and humans.

The other important advance also appeared last month. The article is by Wu et al with 37 authors in total. Fifteen authors are from Salk Institute; thirteen are from universities in Murcia, Spain; six from UC Davis; and others from other Spanish institutions. Summaries of the work appeared in The Guardian, National Geographic and other media.

The researchers produced pluripotent stem cells from human foreskin fibroblast cells. They injected these cells into pig embryos, creating a human-pig chimera. After implantation into a sow, the embryos developed for one month before extraction, analysis and destruction.

Implications of the Pig-Human Chimeras

Humans and pigs are far apart on the evolutionary tree. Moreover, a pig’s pregnancy lasts only four months, so the pig embryo’s development occurs at a much different rate than a human’s. Therefore, perhaps it’s not surprising that the embryos were not very robust. Only 9% of the two thousand implants survived one month. In addition, the hybrids developed more slowly than normal pig embryos.

Analysis showed that the one-month-old embryos were indeed chimeras. However, the fraction of cells that were human was extremely small. Articles quote different members of the research team as estimating that the human cells numbered 1 in 10,000 or 1 in 100,000. 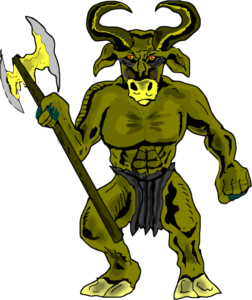 The Minotaur, a mythical bull-human chimera

Ultimately, researchers would like to raise pigs or cows with fully developed human organs suitable for organ transplant. That could realize the promise implied by the mouse pancreas work. However, it would depend upon immense improvements on the efficiency with which human cells can be grown within these large mammals.

Consider:
– Animal rights activists often oppose research employing animals even if the aim of the research is to save the lives of humans.
– Others, perhaps stoked by too many horror films, worry that chimera research might produce half-human monsters.
– The U.S. National Institutes of Health decided in 2009 not to fund programs in which researchers introduce human cells into animal embryos, due to “ethical and animal welfare concerns.” Although NIH stated in August 2016 that they expect to lift their ban, thus far that has not happened1. (The Salk study described above did not use any federal funding.)
– The ethical concerns1 focus on the possibility that human cells might boost the intelligence of animal brains, or that human cells might develop into sperm or eggs within the animal. The Salk researchers avoided this possibility by destroying the pig embryos long before they reached maturity.

In future work researchers will probably employ human cells engineered so that they cannot contribute to the host animal’s brain or reproductive system. Whether such steps are sufficient to pacify ethicists remains to be seen.

Nevertheless, ethical objections are not likely to call a halt to progress in this field. Recent history has shown that research that’s not supported by federal funding may instead be supported by other sources. Moreover, research banned in one country will still occur in other countries, so long as there’s human need or profit potential in the work.

OK, so growing human organs within animals is not only difficult, it rallies self-appointed critics. What about taking a bit of skin from a patient with a failing liver or heart and using it in a laboratory to grow a replacement for organ transplant?

I have previously written about scientists attempting to grow meat from its component parts in a laboratory. However, it’s a long step from growing a piece of muscle to growing an organ that actually needs to function. As noted above, organ growth requires a lot more than a few stem cells. It also depends on chemical signaling and physical constraints that guide its development. We are just beginning to understand the factors that lead to normal development of an animal organ.

Until we have a much more comprehensive base of knowledge, we can forget about human organs grown in a laboratory vat. Using large livestock animals as hosts offers a nearer-term approach toward the goal of organ transplant abundance.

People are literally dying for lack of an organ transplant. Addressing that need seems like a human imperative. Which approaches seem most practical and ethical?