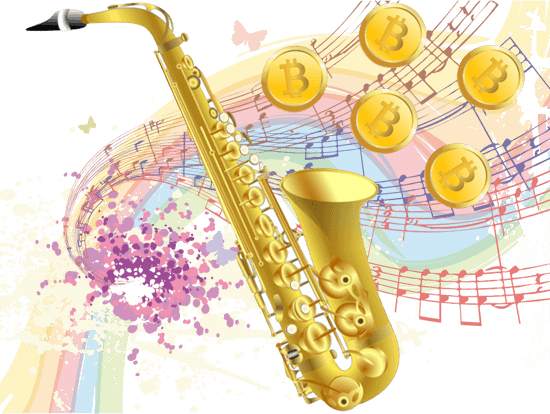 Bitcoin music transactions are already with us. They may change the $17 billion music industry in ways that affect consumers as well as artists, producers and distributors.

Have you thought about bitcoin music? If so, you might associate it with rapper 50 Cent, who accepted bitcoin payment for his 2014 album. Followers of electronic music artists like Pegboard Nerds, Rogue or Noisestorm, are aware that their record label Monstercat allows bitcoin music purchases. However, what you might not know is that almost a hundred retailers will happily accept bitcoin for any kind of media you might like to acquire.

In this article, we use Bitcoin as shorthand for any blockchain-based cryptocurrency. There are over a thousand competing blockchain currencies, and most will probably not survive in the long run.

[Opinion by Art. The anonymity promised by cryptocurrency is ideal for criminals, scammers and people who need to avoid government scrutiny. If you are not one of these, such currencies are not a preferred means of exchange nor a safe investment.]

Bitcoin is the best-known face of Blockchain technology, first defined by mysterious Satoshi Nakamoto ten years ago. It has evolved since then, and now seems to be finding its first real applications.

In one of my articles on the latest law jobs site I defined blockchain as “A shared, trusted, public ledger that everyone can inspect but which no single user controls.” Before we delve into the meat and bones of the subject, I would like to point out that cryptocurrency is already a massive gamechanger for businesses operating across multiple industries. For example, Peaches and Screams is one of the largest lingerie brands in the UK, worth over £70 million. It was the first online retailer in the UK to embrace cryptocurrencies. In addition, in the UK The Eliquid Boutique was the first vape shop to accept bitcoin and later over 100 alternative coins. Cryptocurrencies are permeating a number of industries, and now bitcoin music transactions are also becoming significant.

Simply put, the idea of blockchain is to build a new kind of Internet. It eliminates intermediaries who suck out value from every exchange in return for providing guarantees to both parties. As you might know, that’s what companies like Visa do every time you make a payment with your credit card. In the Blockchain, every transaction is recorded. It forms a public chain from the very first exchange to the most recent one. And that provides amazing transparency to all participants using the technology.

Now, let’s consider the music industry. There are millions of everyday transactions on thousands of online platforms. And huge numbers of intermediaries are charging rights owners for royalties management and collection. Often, artists don’t know precisely how much each intermediary earns from their music, especially considering online sales and streaming.

That is the problem that Phil Barry, a musician and Cambridge alumnus, is trying to tackle. Barry has been doing so by collaborating on the elaboration of different products, including the platform Ujo Music. In the past he faced the problems he’s trying to solve now. Therefore, we had a talk with him about his vision on an industry that he and many others are trying hard to disrupt.

It’s the people who confront the flaws of the music industry who are innovating – and that’s refreshing.

Phil Barry As a Driver of Bitcoin Music

Phil Barry is not a music business rookie. He spent eight years as a recording artist and ended up running his own label during half of that time. Although he was recognized for the quality of his music, he has mixed feelings about his experience. That’s mostly because music is an old-fashioned industry. Its leaders aren’t willing to focus on the two most important actors: the listener and the artist.

“I have to say that I had become extremely frustrated by the music industry’s failure to adapt to new technologies, not delivering value to creative people depending on the size of their audience,” Barry says. “That issue comes back no matter what type of structure you get to work with: the licensing system is the core problem.”

Barry was involved in the innovative release of Thom Yorke’s “Tomorrow’s Modern Boxes” through Bittorent in September 2014. As a result, Barry became interested in upcoming technologies that could have an influence on our current economic system. However, it was mostly after reading an article by D.A Wallach that he started working on a collaborative project. He gathered creative folks of different horizons with one idea: to make the music industry fair again. A few months later, a prototype called “UJO Music” was introduced to the public in association with grammy-award winner Imogen Heap.

Music Licensing As the Core Problem

And that’s when the bitcoin music story gets really interesting. A former indie musician, a prize-winning artist and software developer had collaborated, demonstrating that the industry could work differently. “It was kind of a meeting of minds: we got the same idea at the same time,” Barry explains. During his partnership with Heap, Barry “felt that there was an overlap between what [they] were trying to achieve and her vision as an artist toward a fair and renewed music industry.”

The idea of Ujo was simple but awesome. Ujo would be an open-sourced platform for artists and rights owners to sell their creations. And they could design and add their own services on top of the main infrastructure. Every transaction would be recorded in the Blockchain. Then royalties are redistributed real-time as specified in the smart contract, with a program automating the whole process.

My first thought after discovering the possibilities offered to the music industry by Blockchain was: how can you bring clarity and fairness to artists when your technology relies on cryptocurrency, known for its sudden shifts in value? And who, except for experienced techies, is willing to pay with Bitcoin or Ether to buy an album?

“It’s not that I don’t believe in cryptocurrencies, but it’s not what attracts me in the technology,” Phil Barry told me straight away. “We have to make it possible, at least in the short run, for people to engage with physical currency.” The idea here is not to get into a war with the current monetary system, but to bring back compensation to the people who are creating value. And Barry is straightforward about his skepticism toward cryptocurrencies.

He says, “Many people think that cryptocurrencies can replace ‘normal’ money: I disagree. At least, not for now. The value of these currencies is increasing over time instead of decreasing, as there is only a limited amount of it: what would happen if the whole world started to use Bitcoin?”

Is the Music Industry Willing To Accept Change?

Technology lately has had a huge influence on the business of making, recording and distributing music. Since the 2000’s, music industry sales have shrunk by one-half. All major labels completely reorganized themselves in a survival effort, made critical by the spread of peer-to-peer downloading. Tech companies earned a great part of the cake by providing solutions that historical actors didn’t want to see emerging: digital sales and streaming.

That recent disruption is the reason why labels and right holders won’t try to “put the technology back in the bottle again,” Phil Barry asserts. The practice of consumption and distribution of music has already changed significantly. As a result, industry players would rather take advantage of Blockchain than deny an upcoming market trend again.

But the industry’s one and biggest concern might be what makes the core of Blockchain: transparency. Indeed, with data value going through the roof and their habit of inserting confidentiality clauses into every royalty contract signed by an artist, it seems unlikely for music companies to go public about their business anytime soon.

However, there’s an “unless”: If Blockchain’s promised efficiency turns out to save the industry enough money. At present, performing rights management expenses add up to 12.7% of total royalties.

Therefore, the future of bitcoin music may boil down to this: How much money can bitcoin music transactions save? And is that enough to persuade the music industry to embrace it and relax contract confidentiality?

About the Guest Author: Tony Coombes is a legal recruitment specialist at https://latestlawjobs.com. In his spare time, he enjoys composing synthwave music, spending quality time with his wife Binky and their cute pug called Shmoggy. Tony enjoys regular country walks, wine tasting, clay pigeon shooting and jogging around London, and is a massive fan of The Big Bang Theory.

Drawing Credit: Adapted from andinuryadin, Manuela and casino on openclipart.org