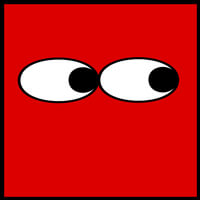 Science Fact: Gaze tracking reveals exactly what you’re looking at, through the combined magic of video imaging and computer analysis. And researchers have used this very accurate measurement technique to confirm the truth of one of women’s peeves: the man you just met looked first at your chest, then your hips, and only then at your face. This “objectifying gaze” may occur in the wink of an eye but ladies, you knew it and now Science does too.

But get this: women – yes, that’s straight women – often look at women exactly the same way! What’s going on?

The usual explanation in the case of men is that there’s a caveman living back in every man’s brainstem. This primitive creature controls the man’s reactions and automatic movements, and the man is not even aware of that control. And what that caveman wants is, well, you know.

However, this explanation doesn’t seem to work for women. The inner cavewoman, if there is one, is probably not looking at another woman with a view to passing her genes along to the next generation.

When science can’t find an easy explanation, it invents a complicated one. (See the Note below for Mark Twain’s take on this phenomenon.) So here’s that explanation for the present situation:

Researchers hypothesize that women may internalize men’s gazing patterns and use them not only to self-evaluate, but also to evaluate other women. In other words, women may see other women within a framework that reflects patriarchic male priorities.

Of course, this man-centered explanation is not the only possibility. For example, perhaps women have been conditioned by evolution to size up other women as genetic competitors. As a man, I’m in no position to judge this.

In any case, it seems that very many of us become unwitting lechers, if only for that first moment. This fascinating research was published in the Springer journal Sex Roles, HERE. It used a head-mounted eye tracker with three video cameras that looks like a bionic torture device.

Gervais, Holland and Dodd of the University of Nebraska-Lincoln conducted the study, and they limited it to people in Western cultures. Is this therefore evidence of Western Man’s moral decay? Hmm, not necessarily. It’s more to the point to say that the behavior that gaze tracking reveals depends partially or totally on the surrounding social environment. People in other cultures may act quite differently.

Science Speculation: Gaze tracking is not a new technology. It has been used in the advertising business for years. We know that admen test the effectiveness of commercials with focus groups. However, advertisers don’t just ask people what attracted them about an ad display. They also use gaze tracking to measure exactly what viewers looked at, and for how long.

Another application comes in studies of driver distraction by such activities as texting, eating a taco, or applying lipstick. Gaze tracking reveals just how long the driver took his attention  off the road. Fortunately for all of us, researchers usually conduct such studies in driving simulators inside a laboratory – not on Interstate Ten!

What would gaze tracking reveal about your own eye movement when meeting someone new? If you pay close attention, can you tell where your vision is directed during that first second or two?

This blog is referenced on the Meaning of Life cornerstone page. That’s because the meaning of life for each of us should include how we deal with other people. We’d like to understand how people act and why they do what they do. That knowledge gives insights about others and more importantly, about ourselves.

Note: Mark Twain, in Life on the Mississippi, said: “There is something fascinating about science. One gets such wholesale returns of conjecture out of such a trifling investment of fact.”