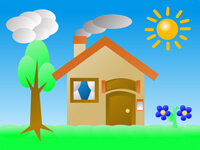 The Sinkhole has joined the Big Three S’s – Sunshine, Shoreline and Storms – as a hallmark of Florida.  But wherever you live, there may be a gigantic sinkhole beneath you, licking its chops, ready to inhale you and everything around you – sinkholes are world-wide and nation-wide. There are famous examples in Louisiana, New Mexico, Utah, Texas, Tennessee, Illinois and Kentucky.

Unless we have one in our neighborhood, we usually think about the sinkhole only when there’s an especially alarming instance in the news. But the fundamental risk occurs because of things that happen underground, out of sight. Here’s a typical sequence of events:
– Flowing or seeping water, especially acidic water, erodes porous rock (“karst”) to form caves or simply fragile honeycombs. Rarely, the caves are man-made, created by mining operations.
– Ground water whose pressure helped support weak structures is drained away for agricultural or domestic uses.
– Heavy rain increases the weight of surface soil significantly. And so much that the frail rock beneath can no longer support it and it collapses to form a sinkhole.


Research studies of the sinkhole have evolved in the following way:
– Historically, people have mapped areas where soluble, porous rock occurs, and have mapped sites of known sinkholes. A global map shows sinkholes practically everywhere, except perhaps Greenland.
– Systematic interdisciplinary studies to build a comprehensive overall model.
– Most recently, satellite measurements of ground elevation that are analyzed in a time series. One-time settlement of the soil is probably not hazardous. However, continued gradual sinking means a high probability that a sinkhole will suddenly develop.

The science is still evolving. And as more and more homes are swallowed up we can expect increased effort by scientists. They will attempt to predict, prevent and, inevitably, remediate sinkhole events. In the meanwhile, insurance companies are watching the field, tuning their underwriting models. That will prepare them to raise your premiums if you are an unlucky homeowner at risk of a sinkhole.

Some practical advice:
– Watch for cracks in the foundation or in basement walls that might mean changes in ground water.
– Be alert to gradual (“inch per week”) ground settlement that might presage a collapse.
– If you live in Florida, learn all you can, just as you would for hurricane safety.

Has a sinkhole disrupted your life, or that of someone close to you?