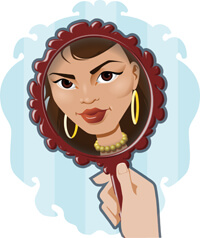 Science Fact: Self, who I am, seems so obvious that we take it as a given. But what happens when we lose a part of self? Concussion, disease, accidents can happen to anyone.

Is self just an accident, a word we use to loosely distinguish one person from another? Or is it something essential and central in our lives?

Take dementia as an example. My elderly uncle may be happy. However, what if he has lost most of his memory: is he still himself? What if his memory is great but his personality has changed and he is ill-tempered and abusive? And what if a sunny individual becomes lost in depression: has she lost her Self?

The law sometimes treats Self as a measure of Sanity. A disappointed relative contesting a will may try to show that Uncle George was not competent to handle his affairs when he left his stake in Apple Computer to a foundation for ferrets. However, what if George spent years of his life supporting ferret charities, and for George ferrets were the meaning of life? The judge might rule that although George’s passion was unusual, it did not brand him as being generally incompetent.

In other words, if you behave like “yourself”, with all that implies, you are more likely to considered sane and not in need of a court-appointed conservator or the loony bin.

If my heart fails and I’m the lucky recipient of the donated heart of someone whose luck did not hold, no one would consider me anyone other than myself. But might organs I receive from someone else take over my soul? Fiction has explored a variety of transplant-related themes.

Suppose the organ transplanted is the brain itself – impossible today but conceivable in the future. If I wake up tomorrow morning in a new body, no doubt I would still feel my same self.  But would others agree?

If my new body has a natural athletic talent and I became a champion golfer (something my present body cannot remotely hope for) it could change my way of life, my friends, my home and perhaps even my personality. Friends who preferred Art as a duffer might shake their heads and say, since Art got that scratch golfer body, he’s just not himself!

Yes, this is a science blog, so let’s find the science.

Self is a topic that has attracted both psychologists and philosophers. Recently psychologists Nina Strohminger and Shaun Nichols conducted a series of experiments to tease out what makes the self, Self. You can find a brief summary in Science, a longer one from Matt Briggs, and the complete research paper.

In online interviews, the researchers presented 148 American men and women with a story. They described Jim, a man whose head is injured in a car accident, but whose life is saved by a new surgery. The doctors simply replace the damaged parts of Jim’s brain with cryogenically stockpiled brain tissue. All the proper connections are made, and Jim’s psychological responses are tested.

The interviewees are asked whether the transplant recipient is still Jim in the following instances:

When Are We Truly Ourselves?

Can you predict what they found?

Agnosia, the loss of ability to recognize things, led to no significant loss of perceived identity. Both amnesia and apathy scored higher in loss of self.

However, the moral faculty was the overwhelming favorite in determining the self that we recognize as the true person. To make it clear about what is meant by morality, the descriptive terms included such positive and negative terms as: spiritual, forgiving, honest, generous; and cruel, rude, selfish, hypocritical.

And That Ain’t All!

Sometimes a scientific study is a one-off: the researchers find one publishable result, rush the written paper out the door, then move on to something else. In this case Strohminger and Nichols deserve a gold medal for being comprehensive. They performed four additional studies with different approaches, still homing in on Self.

Here are those variations in the research:

Consistently across all these studies, every factor with a “morality” overtone scored highest in identifying “self.”

Why do we care about self? Because our human nature is both narcissistic and social: we want to know ourselves and also know each other.

It may take a scientific bent to wonder about the “things” that make up the universe. But every one of us can wonder about that most awesome mystery of all, life itself. Each of us has a laboratory consisting of our body and our mind with which we can explore and understand self.

Values are at the heart of faith, morality and ethics. They determine what we mean to be happy and also in many cases the meaning of life. And moreover, research shows that values are at the core of self as well.

We come full circle once again. We looked at suicide, the extinguishment of self, and found it to revolve around values. And when we look the preservation and understanding of self, that too seems centered on values.