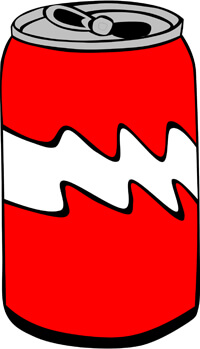 Science Fact: Diet drinks are in our diet to help us lose weight. The name is misleading, because they don’t help us diet at all. Diet drinks don’t reduce our weight, and they aren’t even very satisfying! Scientists are finding out why.

Diet drinks are low-sugar or sugar-free beverages, usually with artificial sweeteners. A CDC study of 2009-2010 data found that on an average day, 20% of the U.S. population consumed a diet beverage That number had been increasing year by year. That’s 61 million people. More than half of those people consumed more than 16 ounces a day.

Although consumption in the last few years has been decreasing, diet sodas still make up a $7 billion business in the US. And most people consume diet drinks in order to diet. They believe or hope that they will reduce their calorie input and as a result not gain weight.

Let’s consider a few numbers. In 2010 the Coca-Cola Company sold 927 million cases of Diet Coke. A “case” (“unit case”) means 192 fluid ounces. Looking at relative market share this means 1,788 million cases of diet soda. At 11 calories per ounce for cola (more for other flavors), this adds up to 3.8 trillion calories.

That’s a hard number to think about. But for those 61 million people, that’s 1,190 calories per person per week. Let’s use the conversion 3500 calories = 1 pound. Then in one year each person avoided gaining 18 pounds in body weight compared with drinking sugared soda.

Wow, I just avoided gaining 18 pounds last year! And 180 pounds during the last 10 years! I’m slim as a model, right?

Not quite. We still have an obesity epidemic in the U.S. And diet sodas appear to have been making it worse, not better. One study found that in ten years, the waists of diet soda drinkers grew 70 percent more than the waists of non-diet drinkers.

So whether or not they constitute healthy food, diet drinks don’t seem to work as a dieting strategy. This is a puzzle, and wherever there’s a puzzle you will find scientists trying to unravel it.

The understanding of diet drinks got a boost from research on runners. Long-distance runners, who run for two or more hours at a time, typically perform “carbohydrate loading.” The athlete eats extra carbohydrates during several days prior to a race. This stores extra glycogen in the muscles and liver to serve as a source of energy.

However, the glycogen explanation doesn’t seem sufficient. Eating carbs also seems to enhance performance over shorter intervals such as an hour. And an hour is not long enough to exhaust the body’s glycogen supplies.

In a 2009 study researchers tested sixteen cyclists, fourteen men and two women. The scientists tested their cycling endurance on four different days. On the third and fourth tests, the cyclists rinsed their mouths with glucose, with maltodextrin or with a non-carb saccharin mixture of similar sweetness. Both glucose and maltodextrin are carbohydrates that the body uses for energy. However, maltodextrin is a starch, a “non-sweet” carb. In addition, the researchers used functional MRI to measure the cyclists’ brain activity in response to the mouth rinse.

The researchers showed that endurance did improve significantly with a carb mouth rinse. Moreover, the carbs also activated parts of the brain associated with reward and with motor control. Thus even without digesting any carbs, the cyclists’ brains recognized carbs in their mouth. The brains amped up the cyclists’ performance and their feelings of satisfaction.

Similar results were found by other researchers in 2011 when testing thirteen “non-athletic” men. Cycling endurance was significantly improved when their mouths were periodically rinsed with maltodextrin. This was true whether or not they had previously eaten a carbohydrate-rich breakfast.

In addition, this year there was a third study by Turner, Byblow, Stinear and Gant at the University of Auckland, New Zealand. It showed that rinsing the mouth with a tasteless carbohydrate improves visual perception and ability to grip a sensor in response to a signal. So far, we can’t (yet) strap an MRI machine to a cyclist while exercising. Therefore, this last study made an important addition because it measured brain function and physical performance simultaneously.

Perhaps science journalists are unusually on the ball, or perhaps the University of Auckland has an unusually savvy media department. Either way, the recent study stimulated some great headlines:
– You Cannot Fake Out Your Brain with Artificial Sweeteners.
– Tongue Has a Sixth Sense.
– You can’t fool the human body when it comes to carbs.
– Sixth Taste on Our Tongues May Unleash Our Energy Reserves.
– Does the human tongue have a SIXTH sense? Researchers claim people have ‘sense of carbs’ – and it triggers the brain’s pleasure centre.

Thus thanks to the research on athletes, we now know why diet drinks don’t help people diet: your body can tell the difference. It can “taste” genuine carbohydrates that provide it with energy. Artificial sweeteners don’t fool your body!

Drinking diet soda does not reduce your weight by 18 pounds a year, because it doesn’t satisfy your body’s hunger for food. In fact, some doctors assert that artificial sweeteners may upset the body’s regulatory system that normally restrains our caloric intake.

Science Speculation: Researchers in this area are beginning to talk in terms of an extra sense that can distinguish carbohydrates. We’re all familiar with the standard basic tastes: sweet, sour, salt, bitter and umami (“brothiness” or “meatiness”). Does it seem reasonable that humans developed an independent sense for carbohydrates?

Perhaps so. Early humans, like us, were omnivorous. At times when familiar food was scarce, people needed a way to tell what was safe to eat and what was not. It’s reasonable to believe that food safety would have had a strong influence on our evolving ability to taste and smell. However, it’s not enough just to avoid toxic mushrooms and poisonous hemlock. Also, we need foods that will provide energy, and necessary vitamins and minerals.

That suggests that we may have evolved senses that would guide us toward healthy food and a healthy diet. Our senses would steer us toward food that not only provided enough energy but also the other nutritional components. That’s the implication of a famous study by Clara Davis in the 1930s.

In Davis’ study, fifteen infants were allowed to eat exactly what they wanted for a several year period, choosing from 33 available foods. There are many reasons such a study would not and could not happen today. Nevertheless, the results are fascinating. Although the children could have acquired one or more serious nutritional deficiencies, none of them did. And this is true although their diets varied tremendously from child to child and from day to day.

So our bodies are very smart about what they are eating. We cannot use “diet” foods to trick them into eating less. If anything, the artificial sweeteners used in such foods may confuse our bodies and interfere with our normal appetite regulation (e.g., if I’m hungry I’ll eat, if I’m full I won’t).

Weight control is a puzzle that science may yet unravel. However, diet drinks, and artificially sweetened foods in general, don’t appear to provide an answer.

Are diet drinks a part of your diet? If so, do you feel that they actually decrease your calorie intake?