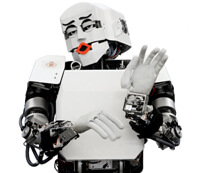 Science Fact: Robots imitating people is a respected line of research in Japan, and the Japanese lead the world in this area.

Getting a robot to do anything is challenging enough, which helps explain why there are many university programs dealing with the design, construction and programming of robots (sample lists are given here and here). It’s even possible to get a PhD in Robotics at Carnegic Mellon and other universities.

It’s even more difficult to build useful functions into a package approximating the human shape as with a humanoid robot. However, perhaps it’s most difficult of all to create a robot with recognizable human-like behavior.

A previous blog (Robot Life & the Uncanny Valley) addressed how robots imitating people encounter an “uncanny valley” in which they appear creepy if they are almost life-like. This week brought two news stories that describe quite different approaches to robots imitiating people.

The robot illustrated above is KOBIAN, created by Prof Atsuo Takanishi and his colleagues at Waseda University in Tokyo. Prof Takanishi has been programming KOBIAN to be a comedian! This seems amazing on several counts: Why would you do such a thing? And what might you learn from this work?

I think it’s more interesting to leave those questions for your speculation. Instead of addressing them, I’d rather encourage you to watch the fascinating video in the news article. Take a look, and see whether you find this machine to be funny, in any sense! What’s also interesting is an article with detailed photos showing how the robot can move and tilt its eyebrows, change its mouth shape and even form asymmetric expressions on its face.

Another current instance of robots imitating people, pointed out to me by Charles South, comes from Prof Hiroshi Ishiguro at Osaka University. He has just put two human-like robots on display at Miraikan, the National Museum of Emerging Science and Innovation, in Tokyo. He plans to study how visitors to the museum interact with the robots, to “harmonize humans with [the] information-environment”, studying “what is the essence of human beings?”

Prof Ishiguro has been prolific in robotic design and engineering. He’s also the creator of the Hugvie, a pillow that looks vaguely like a child, into which you insert your cellphone. Although some journalists sniff that Hugvie is “creepy”, Ishiguro and his colleagues have published research that shows a reduction in cortisol (a stress indicator) when hugging this device compared with having a normal phone conversation.

Science Speculation: It’s interesting to wonder why Japan has chosen such a difficult phase of robotics, robots imitating people. Several reasons come to mind:
– Commercial versus Military. It’s generally accepted that Japan leads the world in companion robots. Similarly, the US leads in military robots (example: the BigDog and its later versions, intended to serve as a pack mule for soldiers). Given the roles of our countries in the modern world, this division of labor is not surprising. Since World War II Japan has been anti-militaristic but very successful commercially, while the US has taken the burden of world’s peacekeeper.
– Aging Population. Japan has a higher proportion of older people than any other country. For this reason, there is social concern with the problems of caring for the elderly. Robotic devices to serve as companions and to assist with Activities of Daily Living are seen as a vehicle for science and technology to serve useful social purposes.
– Business Opportunity. Healthcare is a large and growing market, and robotics companies see a chance to share in a high-margin business. A market study of “service robotics” forecasts a huge demand for servant robots, especially to help the elderly.
– Cultural Acceptance. Japanese people are much more accepting of robotics than Americans. Journalist Christopher Mims traces this cultural difference to religion. Japan’s Shinto has a strong component of Animism, in which inanimate objects may have helpful or supportive spirits. America’s Judeo-Christian monotheism, in contrast, tends to view animated objects as uncontrollable if not outright evil, as in the Golem of folklore and Mary Shelley’s Frankenstein. For a recent take on this, see The Week’s article on “Hollywood technophobia.” However, despite the cultural divide, there’s evidence that our feelings about robots become more positive when we experience them as being helpful.

A measure of progress in robots imitating people might be their ability to make us laugh. Do you find the video of KOBIAN funny, in any sense of the word?

Image Credit: Photo from Takanishi Laboratory, Waseda University, Tokyo. Image reproduction claimed as Fair Use of copyrighted material because:
1. Proper credit is given, with links to original sources
2. It is a low resolution reproduction of an image that is publicly available in media and international conference proceedings
3. The image cannot be used to replace the original photograph or the work depicted, nor can it be used to reverse engineer the work
4. The image is necessary to clearly identify the research that is being discussed
5. The usage is noncommercial, for the purpose of educating the public on scientific advancements
6. No uncopyrighted image is known to be available that would serve the same purposes