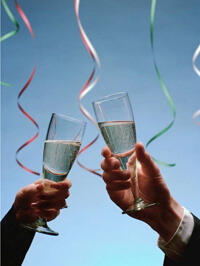 Science Fact: Champagne and its bubbly cousins make a festive way to great the New Year. Today’s post discusses the ancient origins of Champagne, back in the Stone Age, no less. Tomorrow we’ll enjoy a comparative tasting of brut rosé, that cheerful pink sparkling wine.

If you read this blog regularly you’ve already figured out that I enjoy wine as well as other beverages. Five previous blogs on this site featured wine: Taste Bias & the $90 Wine. Sensory Evaluation 1 (Wine): Measuring the Indescribable. Wine Tasting – New from New Yorker. Coffee, Booze & Other Health Food. And Holiday Diet: Slim While You Stuff. But we’ve never talked about the bubblies before!

To see where sparkling wines, and Champagne in particular, came from we need to reach back into history. It’s proverbial that “victory has a hundred fathers, but defeat is an orphan.” For that reason, many would like to take credit for the wonderful success of Champagne as a beverage. I will assemble conflicting claims as best I can to bring us from the primitive beginnings to the present day.

The Birth of Wine

The origin of Champagne-like wines traces back to the earliest fermented beverages. Our best source for their history is Dr Pat McGovern. His official title is Scientific Director of the Biomolecular Archaeology Project for Cuisine, Fermented Beverages, and Health at the University of Pennsylvania Museum. Less formally, people know him as the “Indiana Jones of Ancient Ales, Wines, and Extreme Beverages.”

Dr Pat has been searching out the origins of wines and ales all over the world. To date the oldest fermented beverage he has discovered comes from the Stone Age, in China, some 9,000 years ago. This early mixed drink appears to be a wine made from rice, honey and a fruit, probably a hawthorn or a wild grape.

Modern wine, based on fermentation of grape juice, is almost as old. It dates from 8,000 years ago in Shulaveri, Georgia. Shulaveri, known as Shaumiani since 1925, is a hilltop town 40 km south of Tbilisi and 10 km north of the Armenian border. It has a few thousand residents, mostly Armenians.

The people who lived in this area made red wine from grape juice. They bottled it in ceramic storage jars and added tree resin as a preservative. Thus they created a wine probably similar to the modern Greek wine retsina.

Yeasts are single-celled organisms that are classed in the kingdom Fungi. Thus they are related to molds and mushrooms. Yeasts live by consuming carbohydrates, including sugars, and they convert these to ethanol and carbon dioxide gas. In other words, when we enjoy a cocktail, we are drinking yeast poop. Ugh.

Yeasts occur naturally wherever sugars are present, such as on the skins of grapes and other fruits. If early humans mashed grapes for juice, the juice would have contained yeasts from the grape skins. If leftover juice sat around for a few days, the yeasts would have been working away producing alcohol. And voilà! Wine!

Although the essential ingredient for an alcoholic drink is ethanol, the yeast also produces carbon dioxide at the same time. We see this in the wine as effervescence, or bubbles. Most early winemakers regarded the bubbles as a fault and tried to eliminate them. However, a few chose to enhance the bubbles by adding additional sugar which would undergo a “secondary fermentation.”

The ancient Romans apparently believed that the daily consumption of wine was a necessity for health. Many modern wine lovers would also agree with this sentiment.

A research paper published in 2000 also credits the Romans with intentionally producing sparkling wines. Prof Mario Fregoni of the Institute of Viticulture, Catholic University of Piacenza, studied 2000-year-old writings by Virgil, Properzio, Lucan and Columella. He found references to a number of styles of sparkling wine, including the use of secondary fermentation.

The more I read, the richer becomes the history of bubbly wines!

In southern France, close to Spain and to the Mediterranean, is the Limoux wine district, surrounding the city of Limoux. At least as early as 1531, the Benedictine monks in the abbey of Saint-Hilaire were making sparkling wine. These monks were more than a century ahead of their compatriots in the Champagne district.

And ever since that date, Limoux has been producing highly respected sparkling wines. These wines currently carry one of three official AOC designations:

The Abbey of Saint-Hilaire has been closed since 1748. Therefore, if you want to enjoy wine from the monks themselves, disappointment is in store. However, the Saint-Hilaire name appears on a very drinkable Blanquette de Limoux brut, which I enjoy. And the fact that my nearby Costco sells it at a bargain price is simply a bonus!

My attention was first drawn to Blanquette de Limoux by the comment below this post, from my English friend Nick Greaves. I recommend both the wine and the comments for your consideration.

The wines of the Champagne district of France were known to show a slight bubbling. Early winemakers considered this a fault because the cause of the bubbles was not yet understood.

The Champagne region lies in northeastern France, not very near the moderating influence of the sea. It gets chilly in the winter, with the average low temperature at night dipping below freezing. At these temperatures, wine yeasts become dormant and the fermentation process stops. If the must has a high sugar content to begin with, there may be residual sugar and yeast present when the wine goes to sleep in the cold.

In the 17th century, French vintners sold the English wooden barrels filled with wine. The barrels were appropriate for shipment across the Channel, because they were stronger than the relatively fragile glass bottles of that age. The British merchants would then decant the wine into glass bottles and seal them with corks for retail sale.

The bottles of wine warmed up from their French winter, the yeast awoke and the fermentation process resumed. Since the bottle was sealed, the carbon dioxide could not escape. The result was a bubbly beverage, one which had not been intended by the winemaker.

The Brits rather liked the sparkling wine that resulted, and came to associate it with the Champagne district of France. The English physician and scientist Christopher Merret studied the wines, and he showed in 1662 that excess sugar was the source of the carbonation. He explained a process by which any wine could be made sparkling by adding additional sugar before bottling. That approach is presently known as “méthode champenoise” or méthode traditionnelle.

Thus the French did not single-handedly invent the Champagne that we now know. However, they certainly made significant improvements in the quality and production processes of many wines. In 1668 the monk Dom Pérignon became cellarer (cellar master) at the Abbey of Hautvillers, in the Champagne region. He became highly respected for expanding its vineyards and guiding its wine production. More than a hundred years after his death, one of his successors rewrote history to paint Pérignon as the sole inventor of Champagne, which by that time was enjoying rapidly increasing popularity across Europe and the British Isles.

Although some U.S. winemakers label their sparkling wines “champagne,” in Europe that designation can only be applied to wines from the Champagne region of France. Other bubblies are produced in France, specifically crémant (which is also a restricted appellation) and more generically, mousseux.

Other countries and languages have their own terms for sparkling wines, which may or may not resemble the wines from Champagne, France:
– Cava in Spain
– Espumante in Portugal
– Prosecco in Italy, which may be either fully sparkling (spumante) or lightly sparkling (frizzante)
– Sekt in Germany
– Pezsgő in Hungary
– Sovetskoye Shampanskoye in former Soviet countries such as Armenia, Belarus Moldova, Russia and Ukraine

Ah, but you may say, there is too broad a choice. Are these attractive beverages to imbibe? And if so, how do I choose which one?

Watch for tomorrow’s blog! In it, we touch on the merits of these quaffs and then conduct a tasting of pink bubblies, specifically the one called brut rosé.

You might sip Champagne or another bubbly for a wedding toast. However, faced with all the choices on the shelf, would you choose to drink a sparkling wine for pleasure?

Image Credit: “Champagne Toast” from The Print Shop 2 Collection. Not for download or reuse.