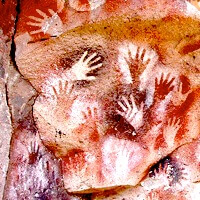 Science Fact: Cave painting women could be found throughout Europe since the earliest days of settlement by modern humans, about 50,000 years ago (the Upper Paleolithic or Late Stone Age). In fact, cave painting women appear to have significantly outnumbered male cave painters throughout the prehistoric era. These conclusions, which put both scientists and bloggers to shame, have only recently gained acceptance due to some innovative archaeological research.

Cave paintings were first discovered in 1880 at the Cave of Altamira, on the north coast of Spain. It took until 1902 for scientists to accept the fact that prehistoric humans had the mental capacity to create recognizable images and designs.

The discovery of many more caves with paintings of animals and human figures led to intense speculation about what this early art must have meant. Modern archaeologists, who were predominantly male, described prehistoric men as returning from a successful hunt and telling their story with drawn images on the walls of their cave. Many of these paintings are accompanied with hand prints or stenciled outlines of hands.

Continued study began to chip away at this initial description. Researchers showed that the caves with paintings were generally not lived in for any period of time. They may have been places of refuge from attack or bad weather, meeting spots, or sites with a religious function, but they were not residences. Nevertheless, other facets of the standard story, in particular the notion that cave paintings were made by males, remained unchallenged for over 100 years.

What the Hand of the Artist Reveals

In 2002 a British biologist, John Manning, studied the shape and relative dimensions of human hands, such as the relative length of different fingers. Manning hoped that hands might reveal such characteristics as gender, sexual preference and susceptibility to heart disease. Archaeology professor Dean Snow of Pennsylvania State University saw Manning’s work and realized that the shapes of male and female hands differ in predictable ways.

Snow had seen photos of the handprints accompanying cave paintings and thought that the handprints actually looked female rather than male. Based on Manning’s work, Snow realized that he had a way to determine the gender of a handprint that might be 50,000 years old. So in May 2004 he visited cave painting sites in southern France to see what he could find. A computer analysis of the handprints called into question two of his identifications, so Snow embarked on a much more extensive study, which he published in 2013.

Snow analyzed literally hundreds of images of hands using an approach building on Manning’s work. He found that male and female hands differ in predictable ways, but only within a particular ethnic population. So to analyze prehistoric cave paintings in Europe, Snow used as benchmarks the hands of ethnic Europeans whose ancestry matched that of the people who lived in Europe in the Late Stone Age.

Snow visited ten cave painting sites in France and Spain, examining hundreds of images of hands, most of them fragmentary or worn. Thirty-two of the images were clear enough for analysis, and this is what he discovered:
– 24 of the hand prints were female, either adult or adolescent; since four of these were near each other, they could have been made by the same person
– 5 were adolescent males
– 3 were adult males

Snow’s work upended the assumptions of a hundred years of scientists and journalists, who had assumed that cave paintings were evidence left exclusively by males.

Since many of the images are of female hands, what about the gender of the artist? We have two ways of determining that cave painting women were the artists of many of the images:
– Many handprints are located in narrow passages where only one person could easily fit; thus the hand drawn appears to belong to the artist.
– Most of the hand images are of left hands. This is what you would expect if a right-handed artist created an image of her other hand. This is true regardless of whether the image was created by using a bone pipe to blow pigment, or by drawing around a hand pressed against a wall. Thus here again, it appears that the hand image belongs to the artist.

There is also an indirect argument based upon observations of modern primates. Blogger Greg Laden, who studied with Prof. Snow at Penn State, states that when you study chimpanzees, you find that the males are virtually technophobes:

Virtually all chimp technology is used by females, invented by females, passed from female to female, and so on. Males don’t seem to do any of that.

Thus if you believe that humans evolved from earlier primates, it’s not surprising if females were primary makers and users of many tools, including the tools used to create art. The 1981 film Quest for Fire seems to agree, as the character played by Rae Dawn Chong saves the day by introducing the Neanderthals to fire-making technology.

Not every advocate of male artists is willing to give up so easily. Blogger Stephen Davies quotes extensive evidence of female handprints in caves, but also points out that men, as the principal hunters, spent much of their time studying their prey in order to better understand how to kill them. Thus men would have been well equipped to produce the accurately rendered drawings showing animal behavior that sometimes appear. Davies concludes that at least some of the artists were male, which I don’t think anyone would deny.

My point is that there is significant evidence that cave painting women practiced art throughout Paleolithic Europe, in contradiction of the assumptions of a century of mostly male archaeologists.

We male bloggers are not immune to sexist assumptions. Those who read my blogs on the Origin of Art (Part 1, the artists; and Part 2, the art) may have noted that the reconstructions of early humans that I showed all appeared to be male. I chose those images because they were the clearest ones for which I could obtain rights; however, I should have been alert to the fact that the museums who commissioned those sculptures chose to make them all male. Although I tried to write the text in neutral gender, I never really considered the gender of the artists until I saw the research by Prof. Snow. Mea culpa!

Science Speculation: We can take this analysis one step further, although this is indeed speculation.

The image at the beginning of this post is a small portion of an immense mural of many hand stencils, in the Cueva de las Manos (Cave of Hands) in Spain: 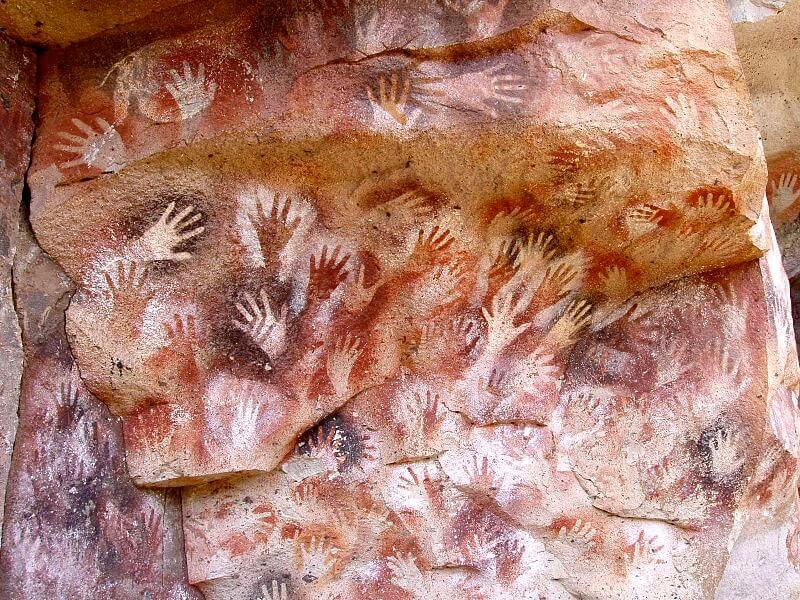 This is most unusual. It’s much more common for an animal scene to be accompanied by one or a few handprints. The hand prints may be next to the main drawing, as in this hunting scene from Cueva de las Manos: 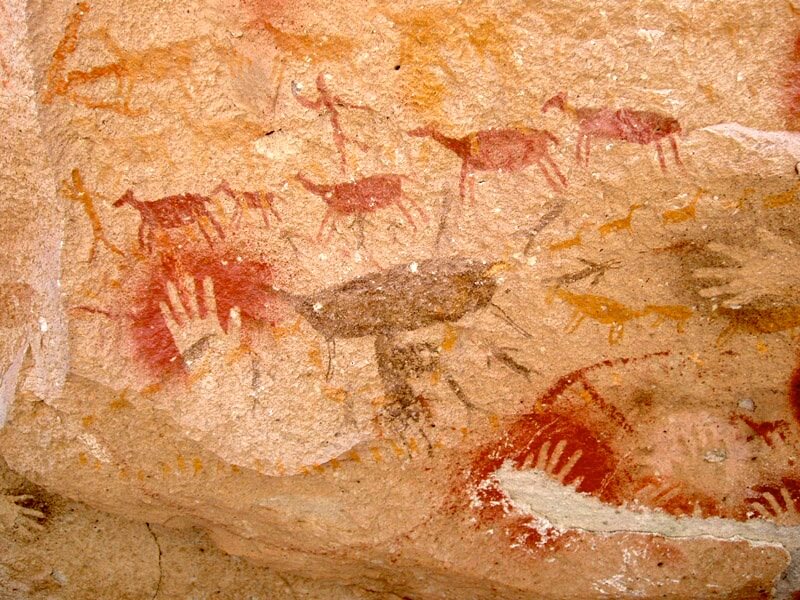 The handprints may instead be overlapping the scene, as in the famous “spotted horses” mural in Pech Merle Cave in France: 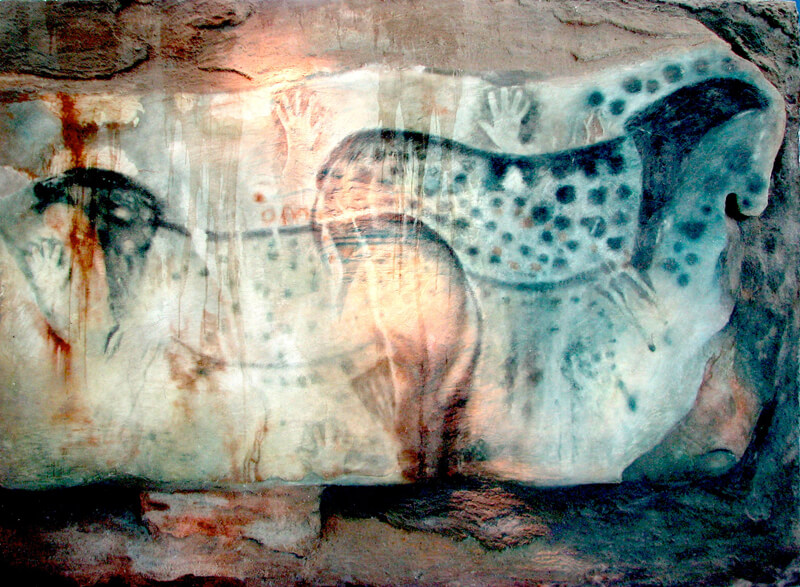 I’m willing to speculate, as some researchers have done, that the handprints may serve as the signature of the artist who drew the principal scene. Thus when we find a female hand that seems clearly associated with a cave painting, we can identify the artist as one of the cave painting women of this prehistoric age.

Cave painting women, and perhaps men too. It’s amazing how much we can learn about prehistoric life and activity.

Images have been enhanced for clarity, based on these originals:
– Cueva de las Manos hands mural and hunting scene from “Marianocecowski” on Wikipedia
– Pech Merle Cave spotted horses from “HTO” on Wikipedia