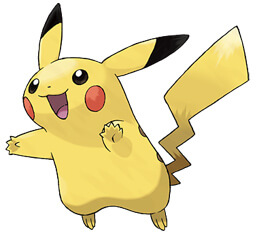 Pikachu, the best-known character of The Pokémon Company

Pokémon Go is a form of geek athletics. It’s the newest way to get teenagers on their feet, to get exercise and socialize with nondigital flesh-and-blood peers.

Parents despaired when television captured the eyes and ears of their kids. It seemed that the only exercise their offspring would get would be walking across the room to change the channel. But, oh no! Along came the remote control!

But at least the family was physically together, right? Only until the proliferation of handheld wireless electronics. Now your kids can hide away from the family, doing heaven knows what with their video device. It’s certainly not physically healthy to sit still for hours, and from all reports, not mentally beneficial either.

Fortunately, the world is a wonderful place. It not only presents us with problems but also, on occasion, brings solutions to them. And the solution to get your kids off the sofa to take part in the world is: geek athletics!

What do we mean by geek athletics? Geek athletics embody these features:
– (1) Activity: geek athletics require substantial physical activity.
– (2) Competition: striving against others or to achieve an important goal.
– (3) Teamwork: tasks involving cooperation with others.
– (4) Intellectual Challenge: typically, a demand for creativity and logical thinking.
– (5) Age Adaptability: appeal to a wide age range, ranging from the primary grades to young adults and beyond.

But all this assumes that we agree on what we mean by geeks! The definition of geek has evolved rapidly:
– Until recently the dictionary definition of geek depicted an unfashionable or socially inept person;
– Current dictionaries embrace an alternate meaning: “an enthusiast or expert especially in a technological field or activity.”;
– An online dictionary injects a bit of humor: a geek is a person “you pick on in high school and wind up working for as an adult.”;
– Here is my condensation of today’s usage: A young person or young adult who’s creative, learns quickly, has some math or mechanical aptitude. Today’s geek is not a loner. On the contrary, a geek is happy to associate with and team with other people, provided that they are really smart!

I recently became aware of two substantial embodiments of geek athletics. Each is getting many smart young people off their butts, out in the world, and collaborating with others. There’s so much interesting progress here that I had to split this essay into two blog posts. In this Part 1 blog I’ll discuss the augmented reality game Pokémon Go, a wildly popular embodiment of geek athletics. Part 2 will talk about the growing world of robotic competition, using as exemplar a Michigan-based business, The Robot Garage.

A Bit About Pokémon Go

Pokémon Go is difficult to discuss because it’s easy to say too much or too little, depending on the audience’s background. I’ll compromise by starting with a Pokémon primer. You can skip this if you already have a good grasp on the 151 original Pokémon and their 578 newer colleagues.

Game Boy was a very successful handheld video game product sold by the Japanese company Nintendo from 1989 until 2003. Two players could compete by joining their Game Boys with a data cable.

Japanese video game designer Satoshi Tajiri, like many Japanese youngsters, had collected insects as a hobby. When he saw the Game Boy, Tajiri imagined its cable transmitting digital characters that would form the basis of a new game. The game player would choose an avatar to roam an imaginary world, collecting bug-like monsters. These monsters could be used as an army to battle against the collection of another Game Boy enthusiast.

The monsters were cartoon figures, typically adapted from real-world animals and insects. Tajiri named them Pocket Monsters, which in English was contracted to Pokémon. The best-known Pokémon is Pikachu, the yellow rabbit heading this post that serves as the mascot for the franchise.

Thus the fundamental premise of the Pokémon game is that players capture animals, then train them as warriors to fight animals that have been enslaved by other players. We should hope that this rather creepy foundation does not predispose game players to promote dog and cock fights or other antisocial activities as adults!

It took six years for Tajiri and his team to develop the Pokémon game and release it for Game Boy. Pokémon quickly grew into a major entertainment franchise for children. In addition to new releases of Game Boy, Pokémon appeared in televised cartoons, animated motion pictures and trading cards.

The Pokémon world has a depth and complexity that can only be hinted at here. For those of you who thirst for deeper knowledge without becoming a full-fledged obsessive gamer, the website polygon.com has a great family of articles to quench your desire. As for us, we will press forward to this year’s geek athletics phenomenon, Pokémon Go.

The Creation of Pokémon Go

The Pokémon Go concept was created in 2014 by Satoru Iwata and Tsunekazu Ishihara. A senior executive of Nintendo, Iwata had long advocated that Nintendo games should contribute to the “quality of life” of their customers, exemplified by the health goals of Wii Fit. Moving Pokémon’s world out of the computer into the real world was a natural evolution in his mind. Ishihara, of The Pokémon Company, was a fan of Niantic’s Ingress game, which required its players to physically move through a large data base of real-world locations. The inventors married the imaginary world of Pokémon with the large catalog of established Ingress locations, and Pokémon Go came into the world.

The game is free to play, although the game tries to tempt its users to make purchases. They can buy Poké Balls, which are used to catch wild Pokémon, as well as other game accessories. More than 75 million people worldwide have downloaded Pokémon Go. Not surprisingly, Nintendo’s stock has gyrated erratically since the fad took hold.

Nola and I try to walk three to five miles every day, whether we are at home or traveling. This month we have noticed many school age folks in non-ordinary postures. They are not riding in their parents’ cars, nor standing around outside the frozen yogurt shop, but actually walking or riding their bicycles. I have come to recognize the Pokémon Go body language: intent study of a handheld smartphone, always held in vertical (“portrait”) orientation, while traveling steadily.

The gamer can choose between two displays. One is a schematic map through which his avatar moves as he walks in the real world. The other is a display showing the real world, with Pokémon figures added. When the game user approaches a physical location that is tagged as home to a wild Pokémon, his phone screen shows the monster. He can shoot a Poké Ball at it with a flick of the finger on the display. A carefully executed shot will capture the Pokémon, which joins the gamer’s collection. Additional play will “evolve” the monster to higher, more powerful levels. Eventually the player will affiliate with a “gym” at which players send forth their Pokémon to compete on behalf of their team.

One of the game’s odd features is that you can collect Pokémon eggs, incubate them and hatch them into Pokémon. The player puts the egg into an “incubator,” then walks a considerable distance – one to five miles – before the egg hatches.

Some say that no good deed goes unpunished. Thus it’s not surprising that some players want to cheat and hatch their eggs without effort. An enterprising gamer has published a video showing how to hatch the egg without walking. The hack involves strapping your phone to a record turntable or a ceiling fan. However, just as Fitbit has tuned its fitness algorithms to ignore car motion from its step count, no doubt Nintendo will do a software patch that outwits these short-cuts for hatching Pokémon eggs.

How does Pokémon Go satisfy my previous criteria for geek athletics? It fits very well, as shown by the following factors:
– (1) Activity: a lot of physical travel – literally, miles – is required to find and capture wild Pokémon and, especially, to hatch their eggs.
– (2) Competition: competition becomes available to experienced players through Pokémon “gyms”.
– (3) Teamwork: joining a gym requires affiliating with one of three teams, which compete to gain and keep control of gym sites.
– (4) Intellectual Challenge: the game involves strategy, exploration, fighting tactics and the acquisition of knowledge, both by playing and by learning from other players.
– (5) Age Adaptability: Pokémon Go certainly has strong appeal for teens and young adults; whether it adapts to younger players I do not yet know.

I conclude that Pokémon Go is a successful example of geek athletics, at least while its popularity continues. It has great potential to enhance the activity level, sociability and intellectual challenge of its players.

In Part 2 of this blog we’ll move on to another contender in the field of geek athletics, one with a strong component of education: robotic competition.