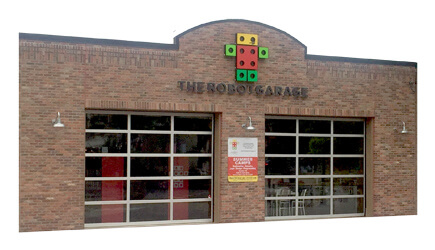 The Robot Garage is a new type of enterprise: it uses the lure of robotics to enhance education via geek athletics.

The previous Part 1 blog described how Pokémon Go puts kids outdoors, moving around and partnering with other kids. However, Pokémon Go has the hallmarks of a fad that may soon fade. Furthermore, it offers little long-term benefit to its participants other than socialization.

This Part 2 discussion takes geek athletics to a new and more enduring level. The field of robotics is blossoming! It’s no longer the sacred precinct of the MIT Media Lab and a handful of graduate school programs. Today, robotics transforms math and computer programming into robust programs of geek athletics. These programs attract children as young as five, and retain their interest through college and beyond.

Here, I’ll discuss how robotics connects with education, using as an example The Robot Garage. This business is Michigan-based1, with storefronts in the cities of Birmingham, Grosse Pointe Park and Rochester Hills.

Note added 12/29/2018: The original Robot Garage branches in Birmingham and Rochester Hills, Michigan are still in operation. However, the store that I visited in Grosse Pointe Park, described below, closed in summer 2018.

The Birth of Robotics Competition

The role of robotics in K-12 education is new to me. However, it has been noteworthy for more than a quarter century. In 1989 inventor Dean Kamen founded FIRST (For Inspiration and Recognition of Science and Technology). FIRST is a New Hampshire-based public charity that is a leading world-wide promoter of STEM (Science, Technology, Engineering and Math) programs for kids. FIRST is famous for sponsoring robotics competitions, where school teams build and program robots that compete against one another. The earliest competition, in 1992, consisted of high school teams competing in a school gymnasium.

An important development that broadened robotics competitions to younger ages came from Lego. Lego, a privately held Danish company, began in 1932 as a builder of wooden children’s toys. Lego started using plastics in 1947, leading to the famous interlocking Lego bricks. Then Lego added mechanical parts such as gears and axles with its Technic series of toys beginning in 1977.

In the late 1960s the MIT Media Lab developed Logo, a computer programming language for children that allowed them to control a “floor turtle,” a simple robot. As computers became more widely available in the 1970s a “screen turtle,” a display image, replaced the mechanical turtle. However, in the 1980s MIT returned to the notion of controlling real-world objects. Thus began MIT’s LEGO/Logo project, allowing children to use a computer programmed in Logo to control complex Lego assemblies.

LEGO/Logo constructions required wires to connect the computer to the structures, and this limited their flexibility. Therefore MIT developed a self-contained computer somewhat resembling an oversized Lego building block, which they christened a Programmable Brick. The brick could be built into a Lego assembly and programmed by a child, creating a computer-controlled robot.

The brick was such an outstanding addition to Lego functionality that Lego built it into a new product line, Mindstorms. Lego established a Mindstorms learning center in Chicago in 1997 and released the Mindstorms product line the following year.

FIRST was quick to take advantage of Lego’s new product, initiating a Lego League robotics competition in 1998 for students 9 to 14 years of age. Then they followed this in 2004 with a Lego League Junior league for students age 5 to 8.

Robotics competition gained publicity and prestige when DARPA, the Defense Advanced Research Projects Agency, initiated a series of Grand Challenges beginning in 2004. These contests offered $1 to $2 million awards for being first to achieve annual goals. The rich prizes brought forth teams of competitors from industry and academia.

The first challenges involved autonomous vehicles, a key military need. These self-driving vehicles are of course robots of a sort, as discussed in an earlier blog. Next, DARPA shifted its emphasis to non-vehicular robots. Their 2012-2015 Robotics Challenges offered the winners lucrative research awards.

Today, there are robotics competitions worldwide. A Wikipedia article lists 47 such contests. Wikipedia groups them into the categories outdoor, indoor, underwater, maritime and aerial. Most provide for separate tourneys by age: elementary, junior high, senior high and college. Teams may include members from different age ranges provided that they compete at the highest age level included. 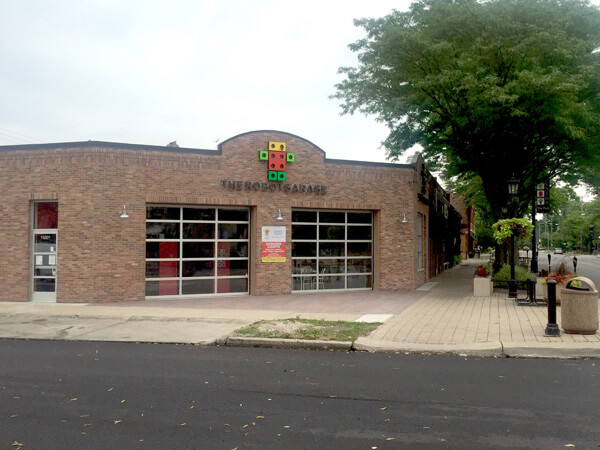 I became aware of the educational dimensions of robotics on a walk through my adjoining city of Grosse Pointe Park, Michigan. I passed a business with the mysterious name The Robot Garage.

The word garage appeared around 1900 as an adaptation from the French verb garer, to shelter. It meant, and still means, a building or shed for housing motor vehicles, or a service and repair shop for vehicles.

Therefore, when I saw The Robot Garage, I wondered whether this shop might be channeling an alternate universe populated exclusively with robots, who would bring their vehicles in for servicing? Perhaps they ran a shop where robot mechanics repaired autos? Or possibly this was a car repair shop whose owner was a robot?

Naturally my curiosity overcame me, so I stopped in for a conversation with store manager Katie Livingstone. I learned that The Robot Garage was none of the fanciful things in my imagination.

Instead, it consists of all these businesses under one roof:
– A retailer of kits for building robots and robotic games (think Toys “R” Us).
– A seller of components for building robots: mechanical parts, actuators, sensors and control computers (think of an electromechanical version of Radio Shack).
– A “maker space” called the Drop-In Room2, where parents and children can experiment together with an array of robots and robot parts.
– An operator of year-round classes and summer day camps teaching the mechanical and computer programming aspects of robotics, and the design of video games.
– A coach for school-based teams preparing to enter robotic competitions.
– A host of birthday parties and other special events featuring robotic games and catered eats.

The Robot Garage Partners with AAUW

The Robot Garage in Grosse Pointe Park is only two blocks from a public school, Defer Elementary. I was happy to learn that the garage had teamed with a local branch of AAUW (American Association of University Women) to fund a school robotics program. Together, they hope to interest young girls at Defer in technical careers. 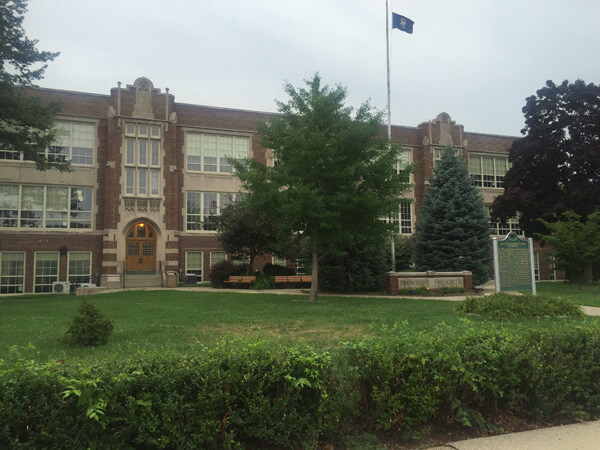 On July 14, 2016, shortly after my visit to The Robot Garage, our local newspaper (https://grossepointenews.com, subscription required) ran a long feature article about the Defer robotics partnership. It showed nine fourth- and fifth-graders who had spent five months of lunch hours learning robotics, showing off their Lego EV3 robots. This begins a five-year program offered to those whom the principal calls “our engineering girls.”

Ms. Livingstone, manager of The Robot Garage, is a former math teacher with a young daughter. Thus she approaches education both as a professional and as a parent. She told me that remote controlled vehicles and devices help attract the interest of younger children. As they become more involved they learn programming, then join school teams to enter robotic competitions. The Robot Garage feeds youngster interest at multiple age levels, by offering a broad menu of hardware and activities.

Although Pokémon Go may be a flash in the pan, robotic education appears to be on a solid long-term footing. The Robot Garage helps prepare school teams for robotics competitions, especially these three:
– The FIRST Lego League Competition, for ages 9 to 14.
– The FIRST Tech Challenge, for grades 7 through 12.
– RoboFest, a competition for 5th through 12th graders.

The educational dimension of these projects is obvious. Furthermore, as a leading encourager of STEM education, FIRST offers many statistics to document its success in channeling young people into successful technical careers.

Robotics in education is not just for K-12, as shown by a recent study. Seven computer scientists from Brunel University in UK explored robotics as an adjunct to a computer programming course. They published the results late in 2015 (Scott et al: Abstract, Full Text).

The researchers set up two parallel programming courses for freshmen, each lasting two twelve-week terms. One version of the course incorporated robotics, concluding with a Robot Olympics competition. In contrast, the other course focused on website programming. A total of 175 students participated in the study, approximately equally divided between the two different courses.

The study found that students who took the course that incorporated robotics produced computer code that had superior functional coherence and sophistication. The research paper states that “practice and reflection both play important roles in the development of programming expertise.” Moreover, students in the robotic course seemed to engage in frequent practice of their skills. Apparently the physical feedback from working with real-world devices results in a qualitatively different and superior learning experience, perhaps by helping the students construct mental models that enhance the educational experience.

We need more studies to understand how best to incorporate robotics into STEM education. Most importantly, the anecdotal experiences collected by FIRST, and also academic studies such as that by the Brunel group, suggest that educators can mine teaching gold in this area.

How do programs such as those at The Robot Garage stack up against the geek athletics criteria I listed in the previous Part 1 blog?

Very well, in all five factors:
– (1) Activity: work with robots is inherently physical, especially when you’re part of a team that has to make its robot perform in a competition far from home. It may not be intense activity, but it beats lying on the sofa!
– (2) Competition: there are many robotic competitions, and the three that The Robot Garage supports are well-organized, mature programs;
– (3) Teamwork: teamwork is inherent in preparing for and participating in these competitions;
– (4) Intellectual Challenge: the classes, the camps and especially the competitions present challenges in mechanical design, computer programming and working efficiently with others. These are skills that the participants should find very useful in later life;
– (5) Age Adaptability: research shows that robotics work is a valuable ingredient in STEM education, from elementary grades through college level courses.

We previously identified Pokémon Go as a successful example of geek athletics. In addition, robotics education scores equally well in this area.

Compared with the Pokémon Go game, robotics has the advantage of a long track record. Moreover, robotics not only enhances activity, socialization and analytical thought, but also provides a direct path to a career in engineering and computer science.

Do your local schools have robotics programs like those of The Robot Garage? Do they promote STEM education in ways that provide the added benefits of geek athletics?