Insights Into the Future of Driverless Vehicles… 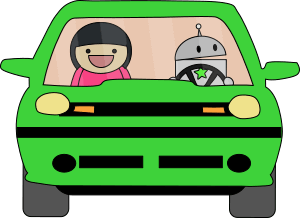 Today’s blog cools off the driverless hype with a look at the future. We take off from an article in Discover and thoughtful comments on that article by subscriber Charles South.

It seems that every car manufacturer is betting that autonomous vehicles will become important to their business. Daimler, Ford, Hyundai and Honda have joint programs with internet giant Baidu. BMW, Nissan, Ford, GM, Tesla and Mercedes Benz are running tests of self-driving vehicles.

The promises are wonderful. Who wouldn’t love to relax in their car while Robby the Robot chauffeurs them to work and back?

But now let’s talk about Self-Driving Risk – the hazards to life and limb of abdicating the role of driver to a bucket of circuits and software.

A Thoughtful Article on Self-Driving Risk

Charles South called my attention to a new article by Hannah Fry in the November Discover Magazine: Baby, Can You Drive My Car. Discover published the article online as The Road to Self-driving Cars Is Full of Speed Bumps.

We have previously discussed the ethics of driverless cars, their future and the challenges of inclement weather.

Fry’s article covers some of these topics, but is especially worthwhile for the time it spends on two issues involving self-driving risk:

Charles provided a critique in each of these areas. The following sections rely heavily on his commentary.

This risk involves human takeover in an unsafe or challenging driving situation.

Some traffic conditions are so unexpected and complex that autonomous vehicle designers doubt that a self-driving vehicle can handle them. They would like the car to recognize when things get out of hand and hand the problem over to a human being.

However, what if the human being isn’t paying attention to the road? After all, that is almost guaranteed if the human regularly and safely uses that autonomous vehicle. And now the car suddenly wants the human to take control.

There’s going to be a minimum time before the human can reengage with the environment around them so as to be able to take control safely. And time is probably what you won’t have, if you’re in a weird situation that the driving software doesn’t know how to handle.

Fry’s article cites one study of handover time. It showed that 40 seconds would pass before a human could take control at their personal level of competency and become sufficiently aware of conditions to decide on the optimal response. It’s easy to think of a variety of situations where 40 seconds is enormously longer than what will be available before a response is necessary.

For example, suppose your engine suddenly quits while you’re on a freeway at normal speed. The best course of action is to steer to a safe area and stop.

If you are the one driving the car when that happens, then you are already aware of your surroundings. You’ll know that you need to act quickly, with awareness of the traffic around you, before you lose so much speed that you can’t maneuver safely.

The ideal approach is to quickly pick an area you want to steer toward and then come to a stop off the freeway. Some humans would succeed in doing that, some would panic and cause an accident, some would coast to a stop in the middle of the freeway and initiate a traffic jam until help arrives.

However, suppose that control is suddenly thrown at you while your attention is somewhere else. You need to act quickly with NO knowledge of the current situation. Even a highly competent driver would be hard-pressed to make good decisions in this circumstance.

Last month Consumer Reports weighed in with its first-ever report on today’s driver assist systems. CR compares four systems, then ranks them in this order:

CR does not want car makers to advertise these systems as “self-driving” or “autonomous.” They worry that drivers will rely on them too much and that errors will lead to fatal crashes. We know of two such accidents involving Tesla vehicles.

CR awards Cadillac the top spot partly because it uses a camera to watch the driver’s eyes. If the car determines that the driver isn’t looking at the road, it will demand his attention. If that doesn’t work it will apply the brakes.

These driver assists are so far from autonomous that CR only considers them safe if they insist on your full-time participation. They avoid self-driving risk only by not being self-driving at all!

The other self-driving risk arises from declining competency.

Once a car routinely drives you various places, it is human nature to backslide on the skills required to be a competent driver. What’s worse, how will people gain that competency in the first place? After all, a teenager who is driven everywhere by a driverless car will never acquire enough experience to skillfully pilot a vehicle.

It’s easy to see how this problem can develop. How many of us can competently handle all aspects of using a horse for transportation? Horse-handling is no longer a required skill, and therefore very few Americans acquire it. As Fry’s article points out, we are already seeing a decline in skills in other areas of driving, such as getting somewhere without a GPS navigation app.

Self-Driving Risk Must Reduce Our Expectations

Here’s the bottom line: Taking self-driving risk into consideration, we need to be realistic about the rate at which driverless vehicles will develop.

Fry’s article mentions two approaches that may occur in parallel:

More generally, the public must come to accept that self-driving errors will inevitably occur. And that realization will limit when and where society allows autonomous vehicles on the public roadways.

Self-driving risk means that driverless cars are not going to be in every garage any time soon. The road into the future is slow and it is bumpy!

Special Acknowledgement: To Charles South for his timely and thoughtful critique of Discover Magazine’s newest article on self-driving cars.